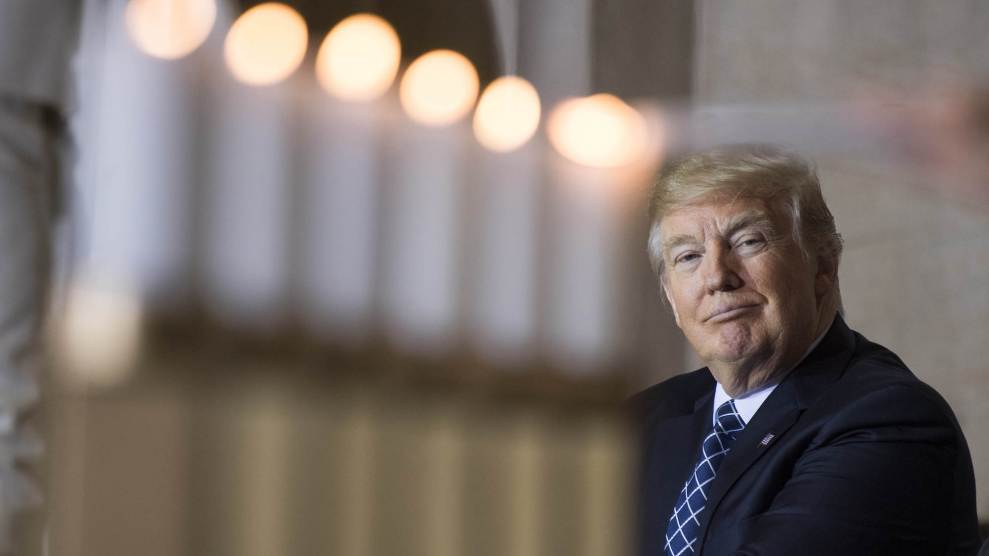 President Donald Trump watches the lighting of memorial candles during the annual Days of Remembrance Holocaust ceremony in the Capitol Rotunda on April 25. Tom Williams/ZUMA

Earlier this year, President Donald Trump appointed Teresa Manning, a leading anti-abortion activist, to be a deputy assistant secretary at the Department of Health and Human Services. The pick was controversial because Manning, formerly a legislative analyst at the conservative Family Research Council and a lobbyist for the National Right to Life Committee, would be in charge of family planning policy, even though she has questioned the efficacy of contraception in preventing pregnancy and has said government should not play a role in family planning. But there was one item in her résumé that did not receive attention: She had once praised a defender of Holocaust deniers.

Manning edited a book published in 2003 that was a collection of essays by die-hard anti-abortion advocates called Back to the Drawing Board: The Future of the Pro-Life Movement. That same year, she moderated a panel discussion in Washington, DC, to promote the book that featured its contributors and was co-sponsored by the Republican National Coalition for Life. Half an hour into the program, Manning—who then went by the name Teresa Wagner—introduced Joe Sobran, who had written a key chapter in the book:

He’s a writer and columnist, a former senior editor at National Review, a known authority on topics as diverse as the United States Constitution and Shakespeare. He authored the chapter in the book called “The Republican ‘Lesser Evil.'” He was tasked with critiquing the Republican Party record [on abortion]. He has been called the finest columnist of his generation as well as a national treasure. I wholeheartedly agree with both statements.

Sobran proceeded to slam the GOP, insisting that “hardly any” Republicans were truly committed to the anti-abortion cause. Referring to the Republican Party, he remarked, “the lesser evil keeps getting more evil.” He hailed Rep. Chris Smith (R-N.J.), another contributor to Manning’s book who was present at the event, for being one of the few Republicans who fully embraced the fight against abortion as a top priority.

In her flattering introduction of Sobran, Manning neglected to mention that a few months earlier, in June 2002, he was a speaker at the 14th annual convention of the Institute for Historical Review. This is how the Southern Poverty Law Center has described the group: “Founded in 1978 by Willis Carto, a longtime anti-Semite, the Institute for Historical Review (IHR) is a pseudo-academic organization that claims to seek ‘truth and accuracy in history,’ but whose real purpose is to promote Holocaust denial and defend Nazism.”

IHR began holding annual conferences in 1979. Holocaust deniers, including David Duke, the neo-Nazi and Ku Klux Klan leader, would attended the gathering. A prominent speaker at the conferences and other IHR get-togethers was David Irving, perhaps the leading Holocaust denier of his time. As the SPLC once put it, “For years, IHR’s yearly conferences were key events that offered networking opportunities for neo-Nazis and anti-Semites from around the world.”

In a 2001 column, Sobran had denied that IHR was anti-Semitic and pro-Nazi and praised its magazine, The Journal of Historical Review, for publishing “long and fascinating articles.” He blasted “Jewish groups” for “reviling the IHR and trying to interfere with its activities.” He presented as legitimate the “revisionist” view that “fewer than a million Jews perished of various causes—chiefly disease—during World War II.” Sobran noted that “many Holocaust ‘witnesses’ have been discredited.” He questioned whether the word “Holocaust” accurately applied to what happened to Jews during the Nazi years, referring to the event as the “Jewish misfortune.”

Sobran’s affinity for the IHR was not surprising. In 1993, he was fired as a columnist for the conservative National Review by editor William F. Buckley, who had once mentored Sobran and now disparaged his “contextually anti-Semitic” writing.

At the 2002 IHR convention in Irvine, California, Sobran hailed the courage of the Institute for Historical Review and its leaders. He called critics of IHR “raving, hate-filled fanatics.” In his remarks—published subsequently in IHR’s journal under the headline “For Fear of the Jews”—Sobran defended the members of the IHR as reasonable people free of any bigotry. “In my thirty years in journalism,” he asserted, “nothing has amazed me more than the prevalent fear in the profession of offending Jews, especially Zionist Jews.” He lambasted Israel and its treatment of Arabs, and he claimed, “The only discernible duty of Jews, it seems, is to look out for Israel.” He insisted that he was not a Holocaust denier himself, but he inveighed against those who criticized the deniers and contended that the main point of the Holocaust narrative was to justify the existence of Israel. “In short,” he noted, “the Holocaust has become a device for exempting Jews from normal human obligations.”

Sobran’s speech to the IHR cost him a job. Prior to the convention, conservative Pat Buchanan had offered Sobran a column in The American Conservative, a magazine Buchanan had co-founded. But shortly before Sobran was to start the column, Scott McConnell, the editor of the magazine, discovered Sobran had accepted an invitation to speak before the IHR crowd. He called Sobran and begged him not to do so, telling Sobran that he could not employ him if he delivered the speech. McConnell feared this would ruin his magazine’s reputation. Sobran was angry and upset and refused to withdraw. McConnell killed his column.

Sobran died in 2010 at the age of 64 due to kidney failure related to diabetes. A Washington Post obituary noted:

Over the years, Mr. Sobran’s views veered ever more wildly to the right, beyond the ken of National Review and anything resembling the mainstream. He praised an unabashedly racist publications called Instauration, which, in Mr. Sobran’s own words, was “openly and almost unremittingly hostile to blacks, Jews, and Mexican and Oriental immigrants.”

With little substantiation, he wrote of centuries of Jewish persecution of Christians and denounced Israel as an untrustworthy “tiny, faraway socialist ethnocracy.” He wrote that the New York Times “really ought to change its name to Holocaust Update.”

In the preface to Back to the Drawing Board, Manning, who did not respond to a request for comment, called contributors to the book “statesmen, scholars, doctors, lawyers, judges, activists, and mothers.” And at the conference, she remarked that they included “people that I have respected and admired my entire professional life.” Presumably, her accolades applied to Sobran, whose controversial association with Holocaust deniers and whose “contextually anti-Semitic” writings were publicly known within conservative circles at the time.

The woman who once hailed Sobran as “a national treasure” today is making policy for Trump.