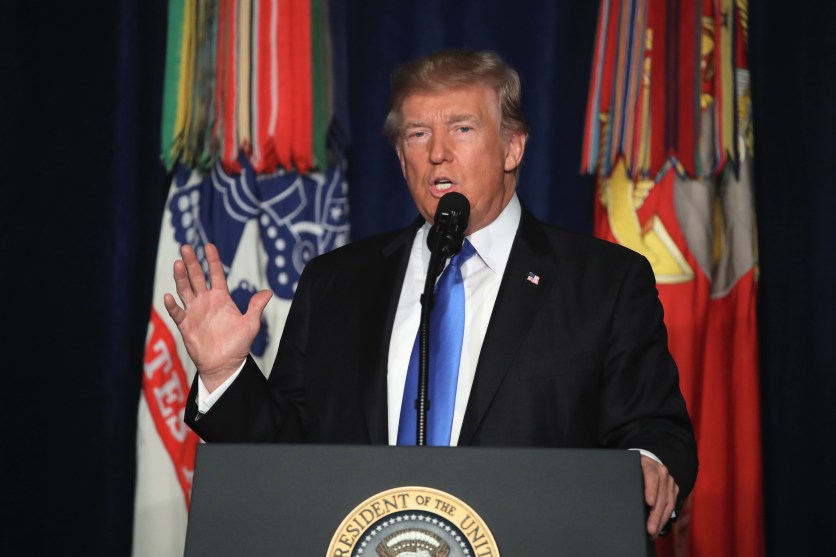 During a primetime address to the nation this evening from Fort Myer military base in Virginia, President Trump finally offered his long-awaited strategic plan for the war in Afghanistan.

The speech was short on specifics, but took time to repudiate the actions of his predecessor: “We are not nation building again. We are killing terrorists.”

“No one denies that we have inherited a challenging and troubling situation in Afghanistan and South Asia, but we do not have the luxury of going back in time and making different or better decisions,” President Trump said. “When I became president, I was given a bad and very complex hand, but I fully knew what I was getting into. But one way or another, these problems will be solved. I am a problem solver.”

Trump laid out a handful of “pillars” on which the new strategy for Afghanistan and South Asia is based. First, America will no longer publicly announce military operations, troop levels, or timetables for withdrawal.

“I’ve said it many times, how counterproductive it is for the United States to announce in advance the dates we intend to begin or end military operations,” he explained. “We will not talk about numbers of troops or our plans for further military activities. Conditions on the ground, not arbitrary timetables, will guide our strategy from now on. America’s enemies must never know our plans or believe they can wait us out.”

Additionally, the strategy will seek the “integration of all instruments of American power, diplomatic, economic, and military, toward a successful outcome,” as well as change how the U.S. deals with Pakistan and “further develop its strategic partnership with India.” Finally, the president claimed, he will ensure the military has “the necessary tools and rules of engagement to make this strategy work and work effectively and work quickly.”

“I have already lifted restrictions the previous administration placed on our war fighters that prevented the secretary of defense and our commanders in the field from fully and swiftly waging battle against the enemy,” Trump said. “Micromanagement from Washington, D.C., does not win battles.”

This speech comes close on the heels of Trump’s controversial comments on the violence in Charlottesville, Virginia, where a rally led by white nationalists left one woman dead and at least 34 injured . The president opened his remarks without mentioning the events explicitly, but denouncing hate and stressing loyalty and love:

“[W]hen one citizen suffers an injustice, we all suffer together. Loyalty to our nation demands loyalty to one another. Love for America requires love for all of its people. When we open our hearts to patriotism, there is no room for prejudice, no place for bigotry, and no tolerance for hate. The young men and women we sent to fight our wars abroad deserve to return to a country that is not at war with itself at home. We cannot remain a force for peace in the world if we are not at peace with each other.”

The announcement tonight marks the end of months of review and debate over the approach to America’s longest war. The Pentagon had been advocating for a rise in troop levels, while other options on the table reportedly included  contracting military personnel to take over operations—a recommendation supported by recently removed chief strategist Steve Bannon.