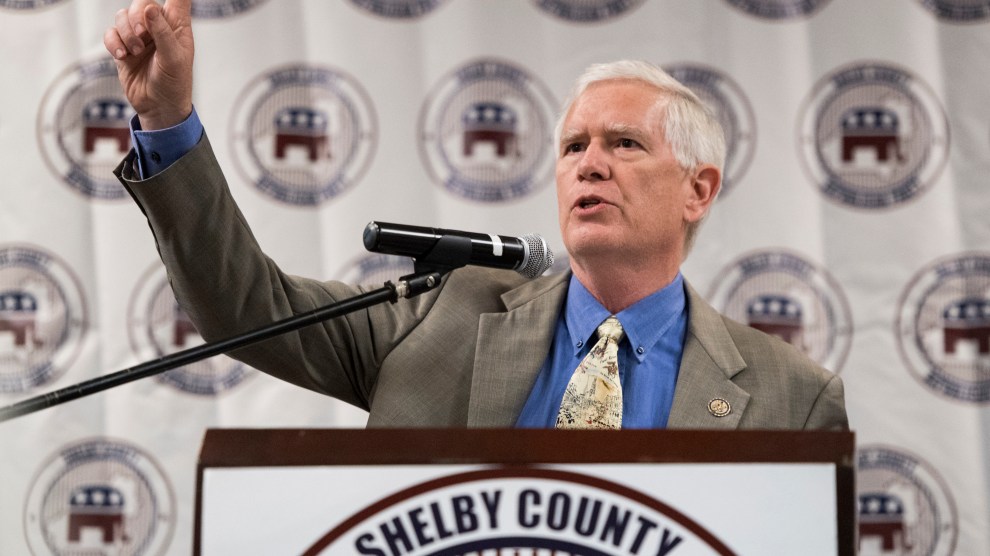 Rep. Mo Brooks of Alabama showed up to vote, presumably for himself, in the state’s Republican Senate primary on Tuesday, only to learn that he had been ensnared by a voter suppression tactic.

Republicans across the country have launched campaigns to root out fraudulent voting—despite no evidence that it’s a widespread problem—and in Alabama and several other states, they’ve done this by sending mailers to registered voters asking them to confirm their registration. Voters who do not respond are put on an “inactive” list and ultimately removed from the rolls. It’s a tactic that has a disproportionate effect on low-income and minority voters, who are more likely to have changed address, or not to receive or respond to the mailer, and who vote less often. But when Brooks, a candidate for Senate, arrived at his polling location in Huntsville on Tuesday, he learned that he was on the inactive list, reports AL.com.

Earlier this year, Alabama’s Republican Secretary of State, John Merrill, mailed non-forwardable notices to every registered voter in Alabama, asking voters to confirm their address. Anyone whose mailer was delivered but did not respond was moved to the inactive list. For voters whose mailers came back as undeliverable from the post office, Merrill sent out a second mailer, this time by forwardable mail. If this second notice was not answered or returned as undeliverable, these voters also were placed on the inactive list. Voters on the inactive list can still cast a ballot after filling out a form to update their information.

When Brooks showed up, he learned he was on the inactive list. So was state Rep. Patricia Todd, a Democrat. Apparently, both politicians had been placed on the list erroneously. According to Merrill, the US Postal Service had failed to deliver the cards. (Brooks finished in third place and will not advance to a runoff vote.)

As Brooks’ experience demonstrates, eligible voters can easily end up on the inactive list. Anyone on the inactive list who fails to vote in two federal election cycles is removed from the rolls. If an inactive voter skips two election cycles and then decides to vote again, that person would be turned away from the polls. Mailings like the one in Alabama are part of a nationwide voter purge effort spearheaded by three lawyers who worked in the Justice Department under President George W. Bush. With two of the state’s most privileged and well-informed voters foiled by the tactic, it’s not hard to imagine thousands of low-income and minority voters being disenfranchised.

The mailer strategy is reminiscent of re-registration, a tactic adopted by a few states after passage of the 1965 Voting Rights Act that required voters to register every year or two in order to stay on the rolls. The premise behind these laws was that white voters would be more likely to re-register each year than African Americans. It turned out to be true.

Merrill described the state-wide mailing, which happens every four years in Alabama, as a way to “preserve the activity” of the voter rolls and “add credibility” to them. He opposes automatic voter registration and believes that voting is a “privilege” reserved for those who demonstrate the initiative to register. “If you’re too sorry or lazy to get up off of your rear and to go register to vote, or to register electronically, and then to go vote, then you don’t deserve that privilege,” Merrill said in an interview last year. “As long as I’m secretary of state of Alabama, you’re going to have to show some initiative to become a registered voter in this state.” More initiative, apparently, than was demonstrated by one of the state’s Congressional representatives.