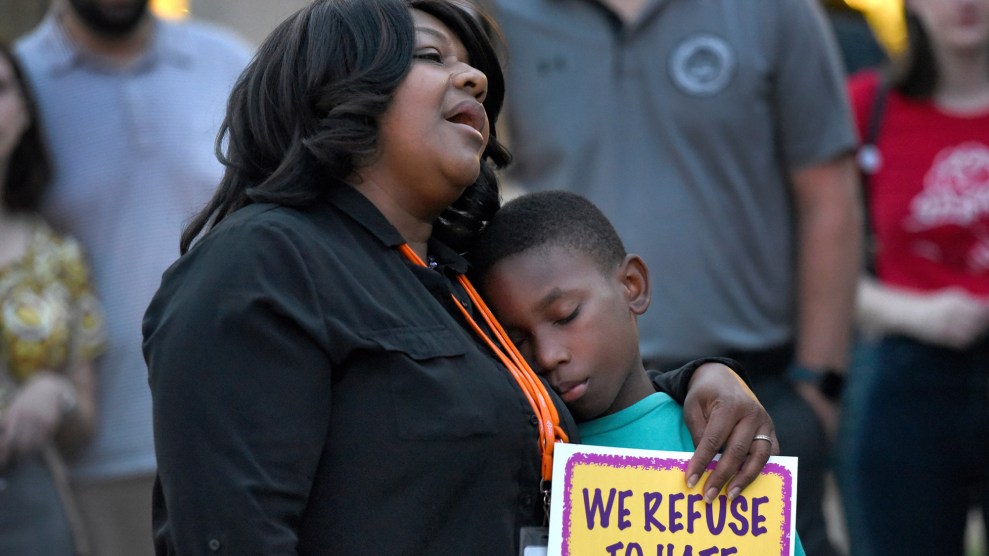 Melody Johnson holds her grandson at a vigil in New York in response to white nationalist rally in Charlottesville, Virginia. Kevin Rivoli /The Citizen/AP

On Tuesday, Matt Shields and his fellow teachers at Charlottesville High School walked into the auditorium for an assembly. They were still dazed from the weekend, still processing the violent conflicts involving white nationalists that had ended in the deaths of one counterprotester and two state troopers.

After they sat down, Shields and colleagues from around the district noticed three glow-stick hearts in the back of the room, representing the lives lost over the weekend. Dr. Rosa Atkins, superintendent of Charlottesville City Schools, reflected on the demonstrations that rattled the community, leaving the educators with a message of unity. At the end of the assembly, they all sang “Lean On Me.”

“From the moment we walked in, it was beautiful and inspiring and healing and heartwarming,” says Shields, who has worked as a physics and engineering teacher at Charlottesville High for the last decade. “It was nice to come back after a summer and talk about how schools are safe places, how schools are where students feel loved, and how schools are lights in the community.”

Following the weekend’s violence, educators around the country are grappling with how to talk to students about what happened in Charlottesville. Some of that conversation has already begun on social media: For example, Melinda Anderson, a contributing writer for The Atlantic, launched the Twitter hashtag #CharlottesvilleCurriculum to crowdsource resources for parents, educators, and students looking to put the weekend into historical context.

Zachary Bullock, who teaches world history to mostly ninth graders at Charlottesville High, says he doesn’t anticipate changing his curriculum much since he already encourages students to make connections with current events. But he says that following such a traumatic experience, teachers should be prepared to build relationships with their students to ensure they are in a safe space and be prepared to take on their questions. “A strong community is the foundation for those hard conversations you might have,” Bullock says.

It’s a familiar situation for teachers in Berkeley, California, home to its own far-right-related protests earlier this year. The city is anticipating another rally directly across the street from Berkeley High School on August 27—just two days before the start of school. On Monday, Berkeley High history teachers Hasmig Minassian and Dana Moran were having breakfast together when the question came up: How would they teach their students about this weekend’s white supremacist rally in Charlottesville, Virginia?

“White nationalism and white supremacy, this is a foundation of our country’s economic system. You can’t talk about capitalism without talking about slavery.”

Minassian noted that because the Charlottesville conflict is part of a larger fight over the presence of statutes celebrating Confederate soldiers nationwide, it serves as an ideal launching-off point to explore the history of slavery in America. “You have to go back and be like, ‘This isn’t something that just cropped up because of Trump,'” she says. “White nationalism and white supremacy, this is a foundation of our country’s economic system. You can’t talk about capitalism without talking about slavery.”

Minassian, who is about to start her 17th year at Berkeley High, says she’s still trying to figure out exactly how to address the chaos that has transpired in Berkeley and Charlottesville this year. She plans on providing her 10th-graders with excerpts from different articles, radio interviews, and on-camera debates to offer a full look at what transpired in both cities. (Back in April, Minassian used the Berkeley protests to share stories that encapsulated why the white nationalist movement saw Trump as an ally.)

She then hopes to probe her students to make connections—to see, for example, if any of her students went to the Berkeley demonstration themselves or knew of others who had. Minassian also says she’ll ask her students to look for deeper meaning, posing broader questions such as “How do you build a just society?” “You provide information, ask them to make connections, and then talk about it,” Minassian says. “The more they trust you, the more they are going to listen to each other in the classroom environment. And that’s the goal: How do you get kids to think critically about these issues and listen to one another talk about them?”

“That’s the goal: How do you get kids to think critically about these issues and listen to one another talk about them?”

Back in Charlottesville, Shields says he has struggled to make sense of what happened in the town he’s essentially called home since 1993. On Sunday, Shields and two friends walked past a memorial for Heather Heyer, the woman killed after James Alex Fields Jr. plowed his car through a group of counterprotesters. They also came upon the press conference called by Unite the Right organizer Jason Kessler. “I was not alone in that rage started to boil up. In the crowd, there was this sentiment of ‘Do we let him speak?'” Shields says. Soon, protesters chased Kessler off the podium.

When school returns, Shields says his curriculum won’t change. But somewhere in that first week, he anticipates rehashing a lesson he’s told his students before. “In physics, when two things have been pulled apart, that represents potential,” Shields says. “And it takes work to separate things that should be together. So somebody came into our town and did work. They pushed two things apart that should be together. But the positive thing is that there is energy in there, there’s potential in that. Charlottesville High School has always represented that. We still have work to do, but what happened on Saturday is a representation of that.”