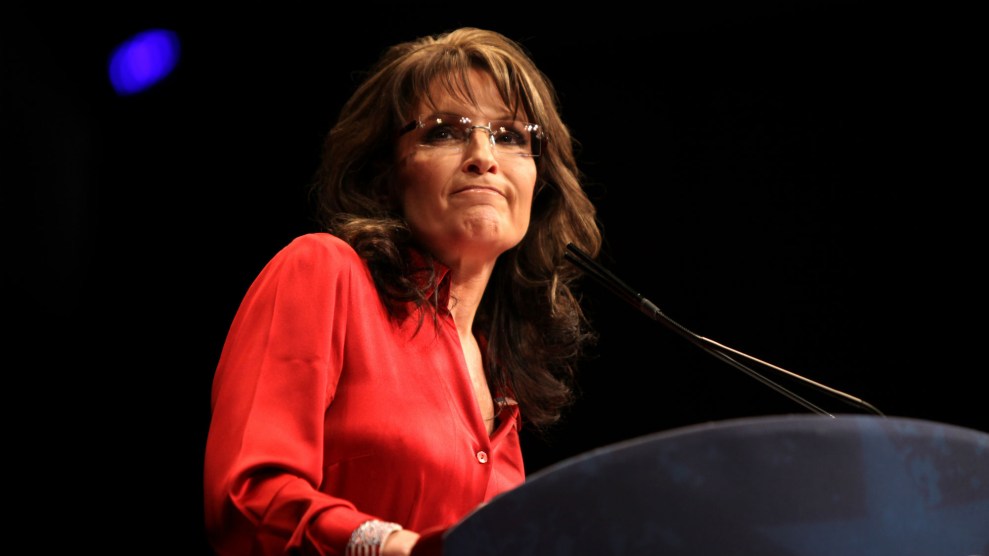 A federal judge in Manhattan on Tuesday threw out former vice-presidential candidate Sarah Palin’s lawsuit against the New York Times. Palin had sued the paper for defamation earlier this year over an editorial that linked her to the 2011 shooting that severely injured Rep. Gabby Giffords (D-Ariz.), killed six people, and wounded 18 others.

In his opinion, Judge Jed Rakoff wrote that the Times was clearly protected by the First Amendment. “Nowhere is political journalism so free, so robust, or perhaps so rowdy as in the United States,” he said. “In the exercise of that freedom, mistakes will be made, some of which will be hurtful to others.”

In the disputed article, published by the Times in June, the paper’s editorial board drew a connection between the Tucson, Arizona, shooting and a map of targeted electoral districts, including Gifford’s, circulated by Palin’s political action committee. The PAC had placed gun crosshairs over the districts in question—and used gun-related language elsewhere to promote its efforts. Though the paper posted a correction noting that no link had been established “between political rhetoric and the 2011 shooting,” Palin’s lawsuit alleged that the Times effectively blamed her for the shooting despite knowing there was no evidence for its claim.

A private person who files a libel lawsuit must prove that the information published about them was false and damaging to their reputation. A public figure such as Palin has to meet a higher standard. She had to demonstrate that the Times editorial board published false and defamatory information knowing that it was false—or at least that the board demonstrated a reckless disregard for the truth.

Clay Calvert, a University of Florida professor and First Amendment expert, told the Washington Post that the Times was clearly protected under the law:

The Times opinion piece is plainly opinion, they quickly corrected it in response to reactions once it was published, and the First Amendment provides breathing space and protection for such statements absent clear and convincing evidence of actual malice precisely so that threats and lawsuits won’t squelch a vigorous real-time discussion of public issues.

In a motion to dismiss the case, the Times argued that its editorial board in no way acted with a disregard for the truth. Judge Rakoff agreed:

Responsible journals will promptly correct their errors; others will not. But if political journalism is to achieve its constitutionally endorsed role of challenging the powerful, legal redress by a public figure must be limited to those cases where the public figure has a plausible factual basis for complaining that the mistake was made maliciously, that is, with knowledge it was false or with reckless disregard of its falsity. Here, plaintiff’s complaint, even when supplemented by facts developed at an evidentiary hearing convened by the Court, fails to make that showing.