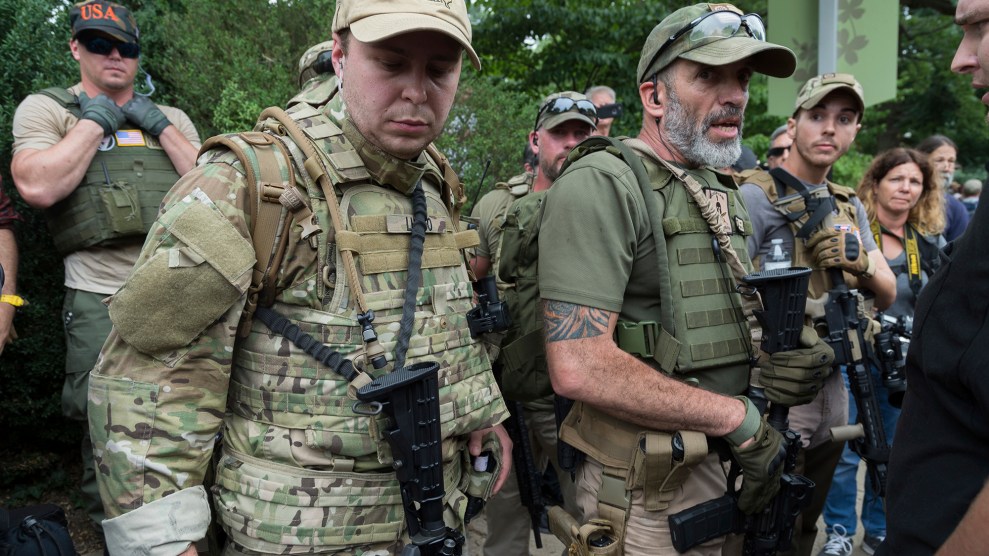 Thankfully, no shots were fired this past Saturday as Charlottesville, Virginia, descended into chaos. But at the “Unite the Right” rally that drew white supremacists from across the country to protest the removal of a Confederate statue, as well as a slew of counter-protesters, it was hard to miss the presence of intimidatingly large assault rifles strapped to camouflage-clad men. To the casual bystander, they might very well have looked like they were affiliated with the National Guard.

Unidentified militia has arrived at #EmancipationPark ahead of the #Charlottesville rally with guns in tow. pic.twitter.com/zCLCBU78PF

We now know that among the armed men was an independent militia, the so-called Pennsylvania Light Foot Militia—a group that has been working to “keep the peace” at right-wing rallies, according to its commanding officer. In a Washington Post interview, its leader Christian Yingling says the men showed up in Charlottesville to defend free speech and remain neutral in the conflict. “Our mission was to help people exercise their First Amendment rights without being physically assaulted,” Yingling said. (He also added that the militia does not support white supremacy.)

Yingling’s group, though, wasn’t the only one bearing arms. Leftist factions like the anti-racist, anti-capitalist Redneck Revolt also showed up wielding guns with the purpose, they said, of defending counter-protesters.

The myriad guns on display during the violent clash was made possible and legally permissible by the state’s right-to-carry (RTC) law. Virginia, like 43 other states, allows the open carry of rifles, sometimes known as “long guns.” State laws allow open carry to varying degrees, but the majority, including Virginia, do not require any kind of permit to openly carry a long gun in public.

“It’s an incredibly unregulated practice,” says Shannon Watts, founder of Moms Demand Action, a gun control organization that lobbies for legislative reform to address gun violence. “There’s really no way to tell if a person openly carrying a military-style rifle…is a responsible gun owner or a white supremacist who’s about to kill someone.”

RTC laws make the role of law enforcement much more complicated and difficult in situations like the one in Charlottesville. Virginia Gov. Terry McAuliffe suggested as much after Charlottesville police faced criticism over the past few days for an unorganized response and for waiting too long to intervene. In what could fairly be considered spin, but is also partly truth, McAuliffe told the New York Times that the militias “had better equipment than [the] state police had.”

Charlottesville police chief Al Thomas told reporters on Monday that his force “was certainly not intimidated by the firepower of the alt-right,” but he did admit that officers were not initially equipped for the mass of guns on Saturday. They had been preparing for a peaceful protest, which is why they started the morning in everyday uniform. When it turned violent, they were forced to transition into protective gear.

Their arguments echo past reporting from my colleague Mark Follman showing that RTC laws can make skirmishes like the one Charlottesville much harder to defuse and to contain. Law enforcement officials do not, by and large, support the myth that a “good guy with a gun” can keep order; rather, they often maintain that ordinary citizens with guns only “divert them from the real threat.” For example, last year in Dallas, a sniper opened fire during a demonstration against police violence, killing five police officers and throwing an otherwise-peaceful protest—where many demonstrators came openly armed, within their rights in accordance with Texas law—into chaos. It made distinguishing between suspects and innocent bystanders next to impossible for police. Before that, in Colorado Springs, a neighbor spotted Noah Harpham carrying an assault rifle down the street and called 911—only to be told that open carry was legal in Colorado. He fatally shot three people minutes later.

Research released in June further supports this notion, showing that states that have adopted right-to-carry laws have seen more violent crime over a ten-year period— a 13 to 15 percent spike—than they would have had they not passed RTC laws. “There is not even the slightest hint in the data that RTC laws reduce overall violent crime,” writes Stanford’s John Donahue, the study’s author.

Charlottesville—with its advanced weaponry, laws protecting their open carry, and heightened racial tension—could have resulted in violence even more explosive than what happened there this weekend. While there was no gunfire, Daniel Webster, director of the Center for Gun Policy and Research at Johns Hopkins, notes that the potential is still there for future clashes.

“Guns were available not only with the militia…but also many of the individuals there with the alt-right or the Nazi groups, they had their own sidearms,” Webster tells Mother Jones. “Nobody got shot, but it doesn’t mean that the next time the same sort of set of events occur that someone doesn’t reach for their sidearm and feel justified.”

Citing the Washington Post interview with Yingling, Webster points out that the presence of an unregulated militia “creates a great deal of confusion” and brings up a larger question about “who should be charged with maintaining public order and public safety.”

“Is [the armed individual] someone who answers to a democratically-elected official, or is it whoever wants to claim themselves to be a militia, and, because of our lax gun laws, arms themselves to the teeth to make them indistinguishable from real public safety people?” Webster asks. “It leaves law enforcement feeling constrained about how assertive they can be to take control of a situation not knowing if this group is going to turn on them.”

For both Webster and Watts, the events of the weekend recall a recent NRA ad, in which a spokeswoman for the organization, Dana Loesch, calls on members to “save our country and our freedom” by “fighting this violence of lies with a clenched fist of truth.” When the ad aired in June, it was interpreted by many on the left as a direct threat. Deray McKesson, a Black Lives Matter leader, tweeted the ad was “an open call to violence to protect white supremacy.”

Webster and Watts are both concerned that, as we see more protests across the country, open carry will become a more regular—and dangerous—tool to intimidate those with opposing viewpoints. The appearance of armed protesters in Charlottesville is, after all, just one example among several others over the past year. Beyond Dallas, protesters, mostly from right-wing groups, have also shown up armed to places like a Texas mosque and a campaign office for Hillary Clinton in Virginia in the lead-up to the 2016 election. Some Republican delegates even threatened to come armed to the Republican National Convention in Cleveland last year to ward off protesters.

“What we’re seeing is a gun extremist tactic, to openly carry to try to intimidate free speech….like somehow, the Second Amendment overrides the First Amendment,” Watts tells Mother Jones. “A key principle of democracy is being able to gather and protest and express yourself, and when the opposition shows up with AR-15s, you’re less likely to do that—that’s anti-American.”