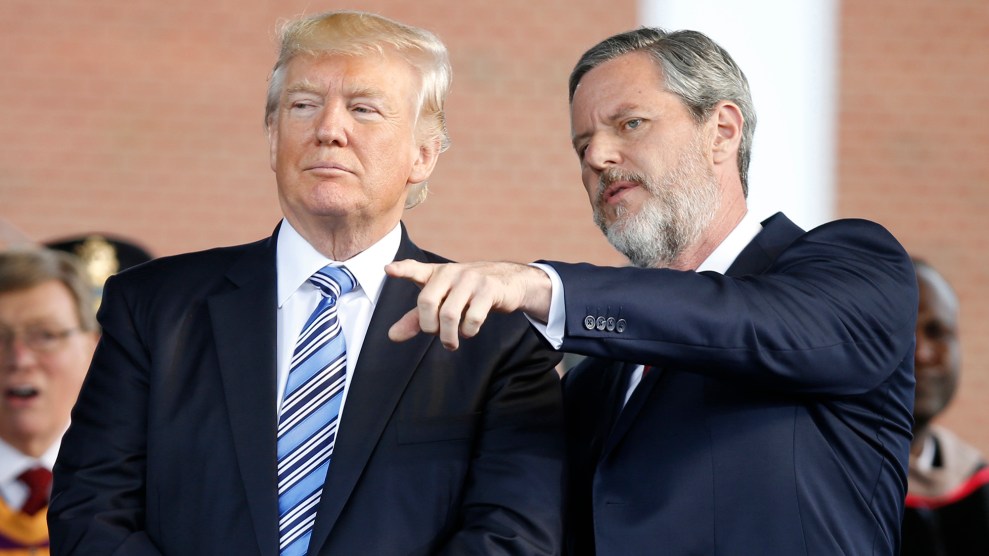 Alumni from one of America’s most conservative evangelical universities are organizing to send back their diplomas in protest of university president Jerry Falwell Jr.’s unwavering support of Donald Trump’s remarks in the aftermath of racially motivated violence in Charlottesville, Virgnia.

After a white supremacist rally in Charlottesville ended with a car driving into a crowd, killing one and injuring 19, Trump criticized people on “many sides” who he said were responsible for the violence. His remarks drew ire for implying a moral equivalence between the neo-Nazis and white supremacists who were in Charlottesville to protest the removal of a Confederate monument, chanting, “Jews will not replace us,” and what Trump referred to as the “alt-left.” The following Tuesday, during a chaotic press conference, Trump drew further criticism when he reemphasized the equivalence by saying there had been “many fine people on both sides” of the protest.

Jerry Falwell Jr. was an exception in the roar of bipartisan condemnation. The next day, he tweeted his support.

The day after that, he tweeted again to clarify his position.

The truth as stated by @realDonaldTrump is that violent white supemacists, Nazi, KKK and similar hate groups are pure evil and un-American.

This was only the most recent incident in Falwell’s long history of enthusiastically backing of Trump. In 2012, he brought the future president to Liberty’s campus to deliver the convocation address and called Trump “one of the most influential political leaders in the U.S.” He described him as the person who “single-handedly forced President Obama to release his birth certificate.” At last year’s Republican National Convention, he declared Trump “America’s blue-collar billionaire.”

But this time, a small but growing contingent of Liberty University alumni have pledged to return their diplomas in an effort to distance themselves from Falwell’s unwavering support of the president. Graduates are also writing letters to the Board of Trustees and to Falwell’s office to express their concerns.

“I’m sending my diploma back because the president of the United States is defending Nazis and white supremacists.”

“I’m sending my diploma back because the president of the United States is defending Nazis and white supremacists,” Chris Gaumer, a former Student Government Association president and 2006 graduate, told NPR. “And in defending the president’s comments, Jerry Falwell Jr. is making himself and, it seems to me, the university he represents, complicit.”

The organizing is mostly taking place in a Facebook group of alumni, which had at least 400 members as of Monday afternoon (although reporters and others who simply wished to show their support had also joined).

Georgia Hamann, a 31-year-old attorney who also graduated from Liberty University in 2006 and is one of the organizers of the effort, says that even before the most recent events, many Liberty alumni have been troubled by Falwell’s “fawning” endorsements of Trump. For her former classmates, Charlottesville hit disturbingly close to home—the city is about 45 minutes away from Liberty University, and many students would go to study in the U.Va. library or see a movie.

“It’s heartening to me to that there are people of faith, wherever they fall on the spectrum, who consider this to be beyond the pale,” Hamann tells Mother Jones. “A Christian university is called to be morally correct and ethically correct, to show kindness to the hurting, and to condemn wrongdoing where necessary.”

James Campbell, a 33-year-old high school Spanish teacher in a school with predominantly low-income students in South Carolina, graduated from Liberty in 2007. He is also planning to return his diploma. “It’s just unbelievable that you can defend Trump at this point,” he says. “To tie the university and its alumni to the defense of [Trump], that’s hard.”

Campbell, who identifies as Christian, feels he received a good education at Liberty, but when his students ask him where he went to school, he can’t “recommend a school that’s not going to be friendly to their views and accepting of where they come from.”

“What would I tell my immigrant students? There’s no way I could tell them to consider Liberty.”

Falwell appeared on conservative commentator Todd Starnes radio show on Monday, where he said the diplomas being sent back are a “joke” and that graduates will likely be using them when they apply for their next jobs.

Liberty University echoed Falwell in a statement by saying “those same diplomas are quite helpful in helping these graduates secure well-paying jobs.”

Diplomas "quite helpful" in helping grads get jobs. pic.twitter.com/nbOpUxTV3S

On Monday morning, Falwell also appeared on Fox and Friends to talk about Charlottesville and praise the president.

“President Donald Trump does not have a racist bone in his body. I know him well,” Falwell said. “He loves all people. He’s worked so hard to help minorities in the inner cities…He’s doing all the right things to help the people that are in need, the minorities.”

Trump, true to form, expressed his gratitude to Falwell via Twitter.

Jerry Falwell of Liberty University was fantastic on @foxandfriends. The Fake News should listen to what he had to say. Thanks Jerry!