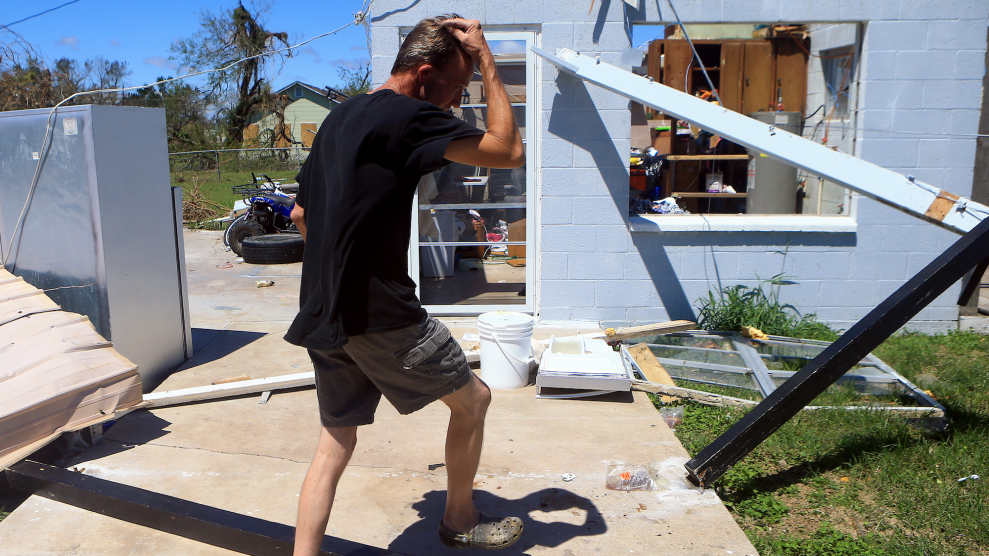 Dean Weiltzel walks past fallen beams after his home in Woodsboro, Texas, was destroyed by Hurricane Harvey.Gabe Hernandez/ZUMA

Congress already had a busy September lined up before Hurricane Harvey hit Texas. In just 12 business days after it returns from its August recess, Congress has to raise the debt ceiling so that the United States does not default on its loan payments and pass a spending bill to keep the government open. Now it will also need to provide billions in disaster relief. For congressional leaders, that may actually provide an opening to get them out of the budget and debt ceiling mess—and maybe even the impasse over the border wall with Mexico.

Where did things stand before Harvey?

Republican congressional leaders have known for months that they will need Democratic votes to raise the debt limit because right-wing members of the House Freedom Caucus insist on pairing the increase with spending cuts that cannot pass the Senate. Relying on Democrats is already a familiar approach for House Speaker Paul Ryan. In May, House Democrats and moderate Republicans passed a spending deal that withheld funding for a border wall demanded by President Donald Trump, despite opposition from more conservative Republicans.

In July, Trump complicated that path, insisting that he would force a government shutdown in September by vetoing any spending bill that didn’t pay for the wall. Trump’s threat was not received well in Congress. Democrats called it a “non-starter” and Ryan said a government shutdown wasn’t necessary. Even Rep. Jim Jordan of Ohio, a founder of the Freedom Caucus, said he would support a spending bill that did not include border wall funding. But Trump’s base wants the wall, and the president insists he will fight for it. Steve Bell, a former Senate Budget Committee staff director who is now a senior director at the Bipartisan Policy Center, told Bloomberg before the hurricane, “I believe that a government shutdown seems inevitable.”

How does Harvey change the spending debate?

At a press conference on Tuesday, Trump promised “rapid action from Congress” to provide “many billions of dollars” in disaster relief. When asked how that fit with his border wall posturing, Trump said, “I think it has nothing to do with it, really,” adding, “I think this is separate.” But it isn’t. The hurricane may end up providing a perfect excuse not to fund the wall.

Ryan and Senate Majority Leader Mitch McConnell can couple Harvey relief with the spending bill needed to keep the government open, as well as the debt ceiling increase. Republican congressional leaders are reportedly leaning toward that approach, which could compel members of Congress to cooperate on those measures if they don’t want to be seen as torpedoing disaster relief. “There’s a huge amount of political pressure,” David Inserra, a policy analyst at the conservative Heritage Foundation, told Politico. “You can’t vote against this.”

If Congress takes this approach, Trump would be forced to shut down the government and deny relief to hurricane victims just to show he won’t budge on the wall. The Washington Post, citing a well-connected Republican lobbyist, reported on Tuesday that some Trump advisers are telling the president to use this opportunity to abandon his insistence on the wall without losing face, and then fight for the wall funding later this year. On Monday, Vice President Mike Pence did not mention the wall while discussing his support for disaster relief.

How does Congress decide how much relief to allocate?

The first step is for the Trump administration to formally ask for disaster relief. Congress will then decide how much of the request to approve. After Hurricane Sandy, President Barack Obama asked for $60 billion and ultimately got $50 billion. (As Mother Jones reported on Monday, Sandy relief was delayed by many Republicans, including nearly all Texas Republicans, in an unsuccessful attempt to force Congress to pair it with spending cuts.)

The Trump administration may end up making two funding requests: one to address the immediate aftermath of the storm and a larger request after the full scope of the damage is known. That would follow the approach Congress used after Hurricane Katrina, when it initially allocated $10 billion and followed up with another $51 billion. One early estimate by Chuck Watson, a risk modeler, puts damages from Harvey at $42 billion. Politico reported on Wednesday that Congress is likely to pair the initial funding with the September stopgap bill, and then add the rest to a December spending bill needed to keep the government open until October 2018.

After infuriating their New York and New Jersey colleagues by voting against Sandy relief, Republican hardliners look like they may back down this time. On Tuesday, a spokesman for Freedom Caucus chair Rep. Mark Meadows (R-N.C.) said disaster relief does not have to be offset by other cuts.

And in a bad sign for Trump, Meadows isn’t demanding the border wall money either. “In talking to a number of my members, if there was a vote for a continuing resolution next week that did not include border wall funding,” Meadows told ABC News, “the majority of those members would be supportive of that.”