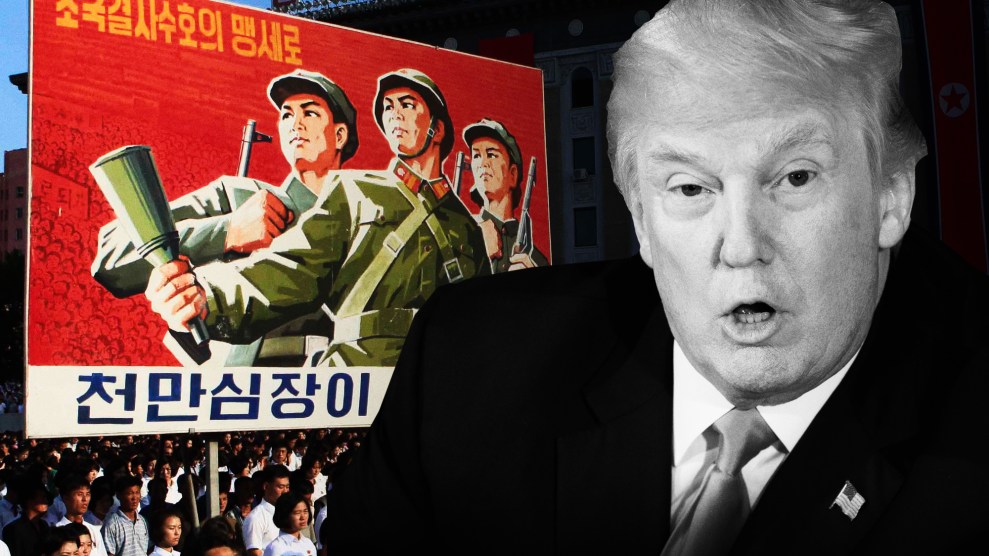 On Tuesday afternoon, President Donald Trump promised to unleash “fire and fury” on North Korea if it threatened the United States. North Korea quickly responded by saying its military was reviewing plans to attack Guam, an American territory in the Pacific that’s home to a strategic Air Force base.

Secretary of State Rex Tillerson has tried to downplay any immediate threat of war. “I think Americans should sleep well at night. [I] have no concerns about this particular rhetoric of the last few days,” he said on Wednesday morning. But Sebastian Gorka, who advises Trump on national security, went in the opposite direction during a segment on Fox and Friends. “We are not just a superpower. We were a superpower—we are now a hyperpower,” he said. “Don’t test this White House.”

Charles K. Armstrong is a professor of modern Korean history at Columbia University and has visited North Korea numerous times. I spoke to him about how worried both sides should be about the prospect of all-out war, and what the United States should be doing to reduce tensions in the region. Armstrong says the current crisis is the worst in nearly 25 years.

Mother Jones: Yesterday, North Korea said it was reviewing plans for an attack on Guam. How are we supposed to sort between standard North Korean bluster and threats, and what we should take seriously?

Charles K. Armstrong: Kim Jong-un has certainly escalated the threats, as well as the actual missile and nuclear development, but I don’t think we should be concerned about a North Korean preemptive strike on Guam.

This is part of their strategy to threaten, and to try to convince the US that they are serious, and that the US should not attack them. But I don’t think there’s much chance that the North Koreans would attack Guam or any other territory out of the blue. They would only counterattack if they felt existentially threatened. The questions is, At want point will North Korea feel it is threatened enough to make such a strike? We don’t know that yet.

“Violence has always been implied by previous US presidents. But the kind of rhetoric that Trump is using is different.”

MJ: So, there’s a certain theatricality about the idea of a preemptive strike from North Korea?

CK: Yes. I think it is mostly bluster. But they’ve made a point of showing the world that they have the capacity to do that, and that’s been their goal all along, certainly ever since Kim Jong-un came to power in 2011.

MJ: President Trump on Tuesday threatened “fire and fury.” Can you recall a similar rhetorical threat from a US president in the past?

CK: Nothing this colorful against North Korea. You’d have to go back to the Pacific War and Truman’s threats to rain destruction on Japan. [Truman’s exact phrase was “rain of ruin.”]

I suppose the closest we’ve come is Bill Clinton in 1994, saying that if North Korea continued its nuclear path, or if they launched an attack, then that would be the end of their country. But “fire and fury” is something that you would expect the North Koreans would say, so it’s interesting that Trump seems to be trying to match their rhetoric, which is a departure from previous presidents who demonstrated “firmness” and “resolve,” but not this kind of threat.

MJ: How much do Trump’s comments depart from previous US strategy to speak firmly, but not outright provoke North Korea?

CK: Violence has always been implied by previous US presidents: That is to say, if North Korea launched an attack, or crossed certain red lines, they would be met by devastating force. And this has been said even by people in the Obama administration very recently. But the kind of rhetoric that Trump is using is different, and I think probably not helpful, because it just provokes the North Koreans to ratchet up their rhetoric as well. At this point, it seems that we urgently need calmer heads on both sides, and we’re not getting that.

“The question mark here is the behavior of the US leadership.”

MJ: Did Trump’s comments materially change the stakes on this tension, in your opinion?

CK: I think that they do in a certain sense raise the stakes, and they certainly are a concern to America’s allies in the region, as well as China, who are urging restraint on both sides. On the contrary, Trump’s rhetoric seems to be escalating the conflict further.

MJ: Practically speaking, how much can we trust the recent reporting that North Korea has miniaturized a nuclear device to fit atop a missile and how does that factor into recent intelligent assessments?

CK: I don’t think there’s any way to know for certain. To a certain extent, we would have to take their word for it. It can’t be proven until they actually use it, which God forbid, they will not.

We do have a pretty good assessment that they have the ICBM [Intercontinental Ballistic Missile] capability to reach targets, at least in the Western part of the US. But the fact that they are claiming to have the capability very explicitly is, in some ways, enough to cause concern in the US intelligence community, and the government in general. I think we do have to take these claims seriously.

MJ: Secretary of State Tillerson tried to downplay an imminent threat from North Korea in an attempt to smooth over the tensions. On the other hand, President Trump’s own adviser Sebastian Gorka went on Fox News and essentially continued to do the tough guy pose. What do mixed messages like this do in the mind of a leader like Kim Jong-un?

CK: I think that mixed messages are not helpful. Again, the concern we should have is not that North Korea would suddenly launch a preemptive strike on Guam or any other target, but that the conflict escalates to the point that there is a miscalculation on one side or another and missiles or bombs are dropped.

I’m not sure how calculated this is, but the White House and the State Department seem to be playing a good cop-bad cop game: Trump makes these provocative statements, while Tillerson says, “We’re not going to have war and we will resolve the situation peacefully.” But I’m not sure how North Korea itself will be taking that. I think they will be listening to Trump, and continuing to ratchet up the situation, unless there’s some other way out through dialogue. I think it’s very urgent the US show a more focused approach, and a common message to the North Koreans, before things get out of control.

“Obviously, the US does not want a shooting war with North Korea. But there has to be some path out of this situation that is also presented that is peaceful.”

MJ: What should be coming out of President Trump’s mouth, if not “fire and fury”?

CK: I think a clear message of deterrence and warning is reasonable. Obviously, the US does not want a shooting war with North Korea. But there has to be some path out of this situation that is also presented that is peaceful. We have sanctions, we have deterrence, but the third leg of any resolution to this problem has to be dialogue. It seems prudent for the US to not only threaten North Korea, but to also offer a way forward.

MJ: In the end, I suppose, a lot of people are waking up this morning wondering how worried they should be of the potential for all-out war.

CK: I think at the end of the day, neither side is going to risk all-out war. I think on the part of the US, there are advisers to Trump who have made it clear that the risk and the cost of war on the Korean Peninsula are simply too great to go down that path. So, I don’t think we have to worry too much. South Koreans don’t seem to be worried very much at all; they’re quite calm about this. And maybe they’re a little bit too sanguine about the situation. They’ve been dealing with a very provocative and bellicose North Korea for some time.

But the question mark here is the behavior of the US leadership, which seems a bit more unpredictable than it has been in the past. The possibility of catastrophic conflict can never be ruled out entirely, but I don’t believe that that’s imminent. I don’t know how calming that is.