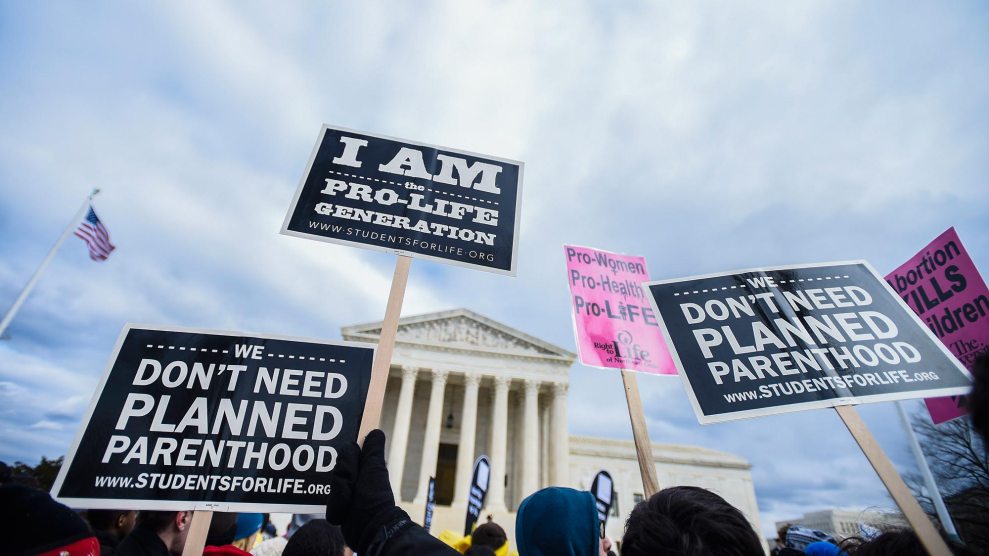 The Trump administration has tried and failed several times to defund Planned Parenthood, but one federal court has just succeeded. In a 2-1 decision, the 8th Circuit Court of Appeals ruled Wednesday that the state of Arkansas can withhold Medicaid funds from the women’s health care provider—a switch the state has sought since 2015. The decision marks a major departure from court precedent and may have set up the issue of Planned Parenthood defunding for a possible Supreme Court challenge.

“This is a surprising decision,” says Mara Gandal-Powers, senior counsel at the National Women’s Law Center. “This is not where the other circuits have come out on this issue, and it’s certainly not what the Medicaid law intends or says.”

The court’s ruling deviates from decisions made in every other case where state efforts to cut off Medicaid funding for Planned Parenthood have been brought before a federal court, including decisions issued by the 5th, 7th, and 9th circuits as well as numerous district courts. All have ruled against state’s efforts to withhold Medicaid funds from Planned Parenthood.

“The 8th Circuit is out there on this,” Gandal-Powers says.

“This is not where the other circuits have come out on this issue, and it’s certainly not what the Medicaid law intends or says.”

The videos that spurred Gov. Hutchinson led to similar Planned Parenthood defunding efforts in dozens of other states, with lawmakers often framing the move as aimed at restricting abortion. The use of federal dollars, including Medicaid, for most abortions has been illegal since 1976, but Medicaid law prohibits the arbitrary exclusion of providers.

Over the last two years, these defunding efforts have faced one legal challenge after another. In most of them, the courts have come to a similar conclusion: Medicaid patients have a right to choose any qualified provider, and these patients have what’s called a “right of action,” which means they are able to challenge state decisions obstructing their choice of Planned Parenthood as a preferred provider. “The great weight of existing federal court precedent is that states cannot exclude Planned Parenthood without a change to the Medicaid Act itself,” says Nicole Huberfeld, a health law professor at Boston University.

In April 2016, the Obama administration reaffirmed this rule, sending letters to officials in all 50 states reminding them that cutting off Medicaid reimbursements to Planned Parenthood violates federal law. What’s more, some of the most conservative courts in the country have reinforced this interpretation of Medicaid law. One salient example, notes Gandal-Powers, is the 5th Circuit, which has regularly upheld state anti-abortion efforts.

“The 5th Circuit is not necessarily a friend to women or Planned Parenthood,” Gandal-Powers, says. “But even they ruled in the opposite way from the 8th Circuit” in September 2016, when the 5th Circuit unanimously blocked an attempt by Louisiana to terminate the state’s Medicaid contract with Planned Parenthood. The court ruled that the patients who had brought the lawsuit “would otherwise be denied…the legal right to the qualified provider of their choice.”

Wednesday’s decision diverged from this long-accepted legal interpretation by calling into question a Medicaid recipient’s right to choose any provider—and subsequently, her ability to defend that right in court. The protections that so many courts have leaned on to protect Medicaid patients’ ability to go to Planned Parenthood are undermined by this ruling, says Elizabeth Sepper, a law school professor at Washington University in St. Louis and an expert on health care and insurance law, and the legal implications extend far beyond Planned Parenthood.

That crucial piece—whether people who depend on Medicaid can sue over the freedom to choose any provider—is what might take the issue of Planned Parenthood defunding up to the Supreme Court, Sepper says.

“States challenging the [freedom of choice] provision will be emboldened by this 8th Circuit opinion,” Sepper says. She notes that this decision rests at the intersection of a general trend by the courts to rule in favor of restrictions on individual consumer rights, and a political climate focused on restricting women’s reproductive rights.

“I think states will count on the toxic mix of abortion politics and consumer rights to get them a result in the Supreme Court that allows the defunding of Planned Parenthood,” Sepper says.

The 8th Circuit’s ruling may be a step toward the Supreme Court, but getting there could take several years. This is only the first decision to cause a circuit split and raise a statutory conflict that the high court may want to resolve, says Sepper. In the meantime, it remains to be seen how and how quickly Arkansas will implement the 8th Circuit’s ruling, which Gov. Hutchinson described as “a substantial legal victory.” For now, Planned Parenthood centers in Fayetteville and Little Rock will continue to serve Medicaid patients, said Planned Parenthood Great Plains interim president and CEO Aaron Samulcek in a statement. Planned Parenthood Great Plains is also considering its legal options for contesting the recent decision.