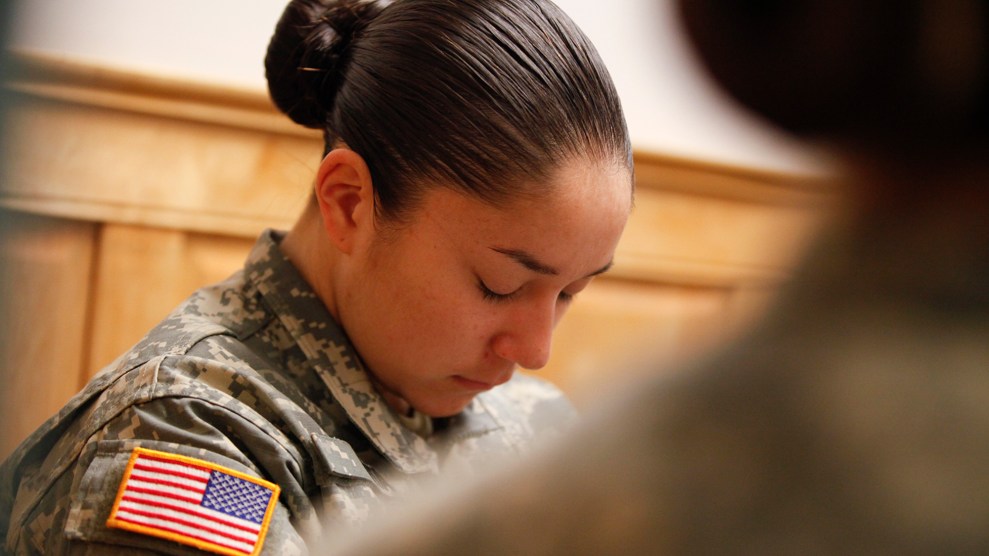 Mary-Ann Rich rises at precisely 4:45 every morning. After feeding her cat, she returns to bed and rests with her back against the headboard, her eyes closed. There she sits for 20 minutes, motionless, her mind drifting far from the images of burned and blown up bodies that have haunted her for a decade. “I would rather miss sleep than miss meditation,” the 63-year-old Rich tells me in her home in San Francisco. “I will be late for work rather than miss my meditation.”

For the past four years, Rich has repeated this daily ritual to help heal her emotional scars from the 18 months she spent as an Army nurse in Iraq in 2006 and 2007. After being diagnosed with post-traumatic stress disorder, she bounced from one treatment to another without much effect. Then she was introduced to Transcendental Meditation, or TM, the mantra-based meditation practice best known for its association with the Beatles and its controversial—some say cultish—guru, Maharishi Mahesh Yogi.

Rich says she’d always been “suspicious” of such things. But by the time she found TM, she was isolated, agitated, and desperate for a breakthrough. She suffered through recurrent dreams of being covered in blood, laid out on top of garbage bags stuffed with severed limbs. “We did an awful lot of amputations,” she explains. She says that TM, more than any kind of therapy or pharmaceutical, has kept these horrors at bay.

The effort has been led by the David Lynch Foundation, aided by $30 million from the Pentagon and the National Institutes of Health.

She’s one of thousands of veterans who have turned to TM to treat their PTSD—with blessing of the Pentagon and the Veterans Administration, which are struggling to treat the epidemic levels of PTSD and suicide among Iraq and Afghanistan vets. (Twenty percent of recent combat vets have PTSD or depression, and approximately 20 veterans commit suicide every day.) The effort has been spearheaded by the David Lynch Foundation, a nonprofit founded by the Blue Velvet and Twin Peaks director to promote TM worldwide. Aided by $30 million in grants from the Pentagon and the National Institutes of Health, Lynch’s foundation has worked with VA centers, Army and Marine bases, and veterans’ organizations to bring TM to vets and active-duty soldiers.

Even though it’s been around for centuries in India, TM achieved notoriety in the West as a facet of ’60s hippiedom that took a cultish turn. Followers descended upon Maharishi’s complex in Fairfield, Iowa, to bring about world peace through group meditations and “Yogic flying.” TM’s skyrocketing popularity made Maharishi a rich man: His organization was reportedly worth more than $3 billion by 1998. Yet many former students felt he had duped them with his increasingly esoteric and expensive techniques. (Maharishi died in 2008.)

Today the practice is undergoing a revival, thanks in no small part to Lynch, who paid a cool $1 million to attend Maharishi’s month-long, teleconferenced “Millionaire’s Enlightenment Course” in 2003. (A lifetime TM membership for non-millionaires costs between $960 and $1,500). His eponymous foundation promotes TM to prisoners, homeless people, and victims of abuse. And celebrities: TM’s most outspoken devotees include Oprah, Ellen DeGeneres, Jennifer Aniston, and even Howard Stern. Jerry Seinfeld has likened it to a phone charger “for your mind and body.” TM has also seeped into corporate America, with CEOs, techies, and hedge fund managers crediting their success to the practice.

Talk of yogic flying has been replaced by claims that TM can make you happier and healthier. Peer-reviewed studies—some funded or conducted by the Maharishi University of Management—have documented its positive effects on the mind and body, showing that it eases stress, reduces blood pressure, decreases insomnia, and improves memory and other brain functions. It’s been shown to relieve asthma and hypertension. A 2006 study from Cedars-Sinai Medical Center found that it reduces obesity and the incidence of diabetes in people with coronary heart disease.

TM practitioners receive a secret mantra—a meaningless word-sound—and repeat it to trigger a free-flowing 20-minute meditation twice a day. The mantra’s lack of meaning is supposed to let the mind ease into an essentially silent state of “transcendental” consciousness.

“If you stick effort into it, you just get in the way and screw it up,” says Colonel Brian Rees, a primary care physician and retired Army Reservist who served as a doctor in Iraq and Afghanistan. TM’s simplicity, Rees says, is uniquely suited to the job of treating PTSD. In 2011, he researched 33 different meditation techniques and found that TM had the greatest potential to bolster soldiers’ resilience. Three years later, Rees studied TM’s effects on Congolese refugees with severe PTSD. All saw their symptoms improve. (The study was funded in part by the Lynch foundation, and Rees’ co-author is a professor at the Maharishi University of Management.)

“I was very skeptical. My first session, maybe 15 minutes in, a loud fire alarm went off, and I didn’t jump.”

In 2012, the Department of Defense put up $2.4 million for an ongoing study comparing TM with prolonged-exposure therapy, one of the VA’s preferred treatments for PTSD. Unlike TM, which emphasizes moving beyond distracting or disturbing thoughts, prolonged exposure therapy involves going over traumatic events over and over until patients become desensitized to them. It’s not very popular, says Rees. “There’s more veterans than you can count who say, ‘That’s the worst day of my life. And you want me to relive that every time I come in here?’” In January 2016, 74 active-duty service members with traumatic brain injury and post-traumatic stress participated in a study on TM at the Medical College of Georgia at Augusta University. Half learned TM; the other half did not. After a month, only 11 percent of those who practiced TM had increased their medication levels, compared with more than 40 percent of those who weren’t meditating.

For her part, Rich says she never got to the point of contemplating suicide but admits that she became accustomed to thinking, “I’d be better off dead.” Michael Castano, a 35-year-old former soldier in New York, recalls that after his time in Iraq beginning in 2003, he often felt that “a bullet to the head” would be “a welcome gift.” “I still see the same burning buses, the people hanging out of them. When I talk about it, like right now at this moment, I even smell the air, and I taste the air,” he says. “These are things that haunt me.”

Like Rich, Castano had tried everything to treat his PTSD, without success. “At the point I tried TM, I was very skeptical. Twenty minutes of sitting doing nothing? That’s not going to change shit.” But then it did. “I’m a guy who cannot be in a quiet room and hear a loud noise go off,” Castano continues. “And kid you not, my first session, maybe 15 minutes in, a loud fire alarm went off, and I didn’t jump.” He hasn’t looked back since starting TM nearly two years ago. “Now I’m living my life. I’m more social. I’m getting out there. I don’t want to say TM saved my life, but it did change my life.”

Vets like Castano and Rich don’t see TM as a cure for their PTSD. Rich’s eyes well up when she recalls working on victims of torture who arrived at her hospital with “every bone in their body broken,” or burn victims who knew they were going to die. Those painful memories are still there, but increasingly, they seem like a thing of the past. “Very recently,” she says, “I’ve started to feel happiness, which I hadn’t felt in years.”