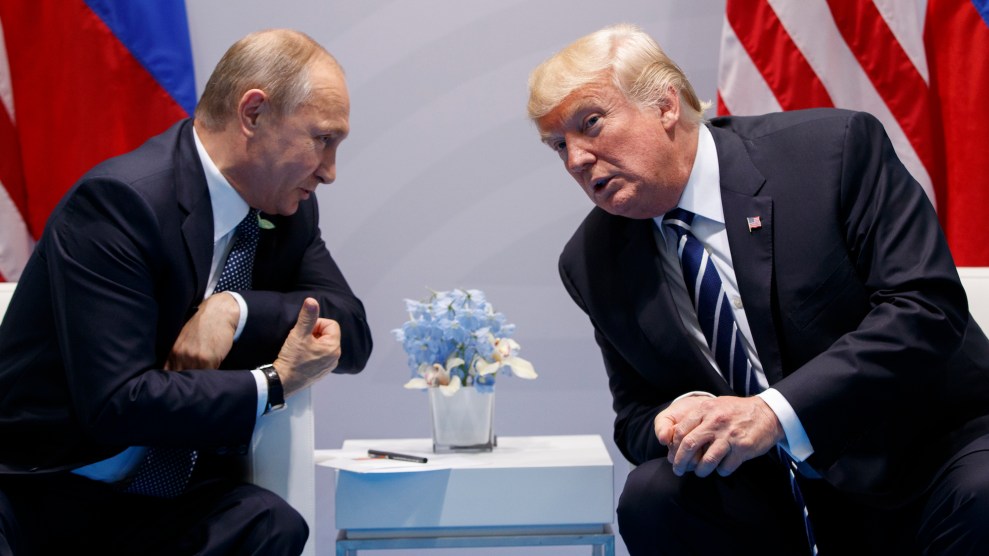 President Donald Trump brought up Russian interference in the 2016 campaign with Russian President Vladimir Putin during their much-anticipated meeting on Friday at the G20 meeting in Germany, according to Secretary of State Rex Tillerson. After Putin denied that Russia ran a covert operation to subvert the US election, Trump agreed to “move forward” and even to collaborate on cybersecurity, said Tillerson, who had been in the room. But Russian Foreign Minister Sergey Lavrov, who also attended the meeting, claimed that Trump accepted Putin’s assertion that Russia didn’t meddle in the election.

Trump “pressed [Putin] and then felt like at this point, ‘let’s talk about how to move forward,’” Tillerson told reporters after the meeting. He noted that Trump and Putin discussed the “challenges of cybersecurity” and agreed to set up a working group to develop an agreement that would allow the countries “to better understand how to deal with cybersecurity.” Trump and Putin, the secretary said, also “agreed to exchange further work regarding commitments” that Russia will not interfere in future elections in the United States and elsewhere. But Tillerson repeatedly noted that Trump had agreed put aside the issue of Moscow’s meddling in American democracy. “The question is what do we do now,” he said. In his account, Trump presented no warning to Putin regarding Russia’s information warfare against the United States.

Meanwhile, US officials disputed Lavrov’s statement that Trump had accepted Putin’s claim Russia had nothing to do with interference in the US election. In his own press conference, Lavrov also said Trump told Putin “that in the US, as before, some groups are spreading—but can’t prove—the topic of Russian meddling in the US election.” Tillerson did not recount any such statement being made, but the sentiment of this alleged Trump remark certainly is in sync with what he has previously said publicly, suggesting the Trump-Russia scandal is a “hoax” and “fake news.”

Trump has waffled on whether he accepts these conclusions, even as he faults former President Barack Obama for failing to do more to prevent Russian hacking.

Tillerson said Friday that Trump in his meeting with Putin “raised the concerns of the American people regarding Russian interference” in the election. That suggests that Trump did not personally endorse the view that Russia interfered.

Whatever Trump said on this front, it didn’t upset Putin. “The two leaders, I would say, connected very quickly,” Tillerson said. “There was a very clear positive chemistry between the two.” He added, “There was not a lot of relitigating of the past.”