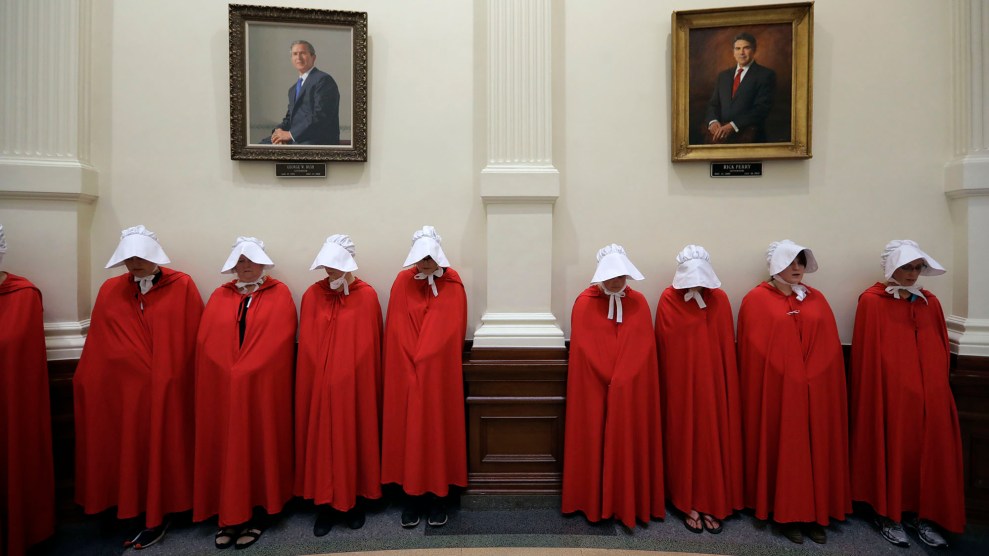 Update, Aug, 14, 3:30 p.m. EST: House Bill 214, an identical measure to Senate Bill 8, which requires Texas women to pay a separate insurance premium for coverage of non-emergency abortions, has passed the Senate and is headed to Gov. Greg Abbott’s desk.

Texas’s Republican Lt. Governor Dan Patrick forced a 30-day special session of the state Legislature starting July 17. It was, he said, to pass the state’s infamous bathroom legislation that would prohibit transgender people from using the bathroom that best aligns with their gender. But, considering it is Texas, and conservative lawmakers in the state are infamous for their efforts to curb abortion access, it’s no surprise that the special session includes multiple bills aimed at limiting women’s reproductive rights.

The state has long been an epicenter of the abortion wars—Roe v. Wade was first filed there. And the landmark Supreme Court ruling from June 2016, Whole Woman’s Health v. Hellerstedt, focused on a Texas omnibus law known as HB 2 that required physicians to have admitting privileges at local hospitals and clinics to be outfitted like hospitals. The justices struck down the law in a 5-3 vote, but not before HB 2 had shuttered more than half the 40 abortion clinics in the state that were still open in 2013, the year the law was signed.

Three new abortion bills under consideration are on Republican Gov. Greg Abbott’s list of must-pass legislation for the session. Senate Bill 4 would ban state agencies from signing contracts with health care groups that provide abortions; Senate Bill 8, would require a separate premium for insurance coverage for non-emergency abortions (with no exception for rape or incest survivors); Senate Bill 10 would require abortion providers to submit detailed reports on any abortion complication directly to the state within 72 hours.

Also up for discussion is Senate Bill 73, which would require providers to report to the state health commission whether a minor who underwent an abortion had parental consent or a judicial bypass. State law already requires providers to report any abortion procedure involving a minor.

House Bill 86, which would revoke the medical licenses of any doctor who performs an abortion in Texas with narrow exceptions for the life of the mother and the fetus, is also up for debate during the special session, but it is largely considered symbolic because it could not withstand a constitutional challenge.

Of those under consideration in the Senate, only SB 8 has not yet passed through the full chamber, while the other three have already passed on to the House. The bills’ opponents argue that so far, the special session is nothing more than what they’ve come to expect from Texas’s conservative Legislature.

“To be completely clear, all of these bills that are being addressed in this special session are for no other purpose than to further chip away at women’s access to reproductive health care, period,” said Dana Kusnir, a Dallas-based abortion provider and a member of Physicians for Reproductive Health.

For instance, while SB 10 author state Sen. Donna Campbell (R-New Braunfels) says the legislation “is just, literally, a medical data reporting bill,” Kusnir argues it’s much more than that and is “a ridiculous waste of time.” According to current state law, a report already must be submitted to the Department of Health 30 days after any complication from an abortion procedure occurs—never mind that complications from abortion procedures are extremely rare. In 2015, the most recent year for which data is available, only 25 complications were reported out of more than 50,000 abortions in Texas. After the low rate was brought up on the floor, Campbell responded by saying that “the percentage is so small that we are doing something wrong.”

The current law, though, simply requests basic data in the reports: the date of the abortion, the type of abortion performed, a description of the complication. The only personal information currently required is the number of live births the patient has previously had. Campbell’s bill takes the reports a step further to also require information on the patient’s race, marital status, state and county of residence, and the number of prior abortion procedures she’s undergone. The report also must be submitted by the physician personally, rather than by a member of the clinic’s medical staff. Doctors who fail to comply would be fined $500 for each day that passes the 72-hour deadline. Kusnir notes that the increased hoops the bill requires doctors to jump through are reminiscent of the vast—and illegal—regulations in HB 2.

“Should our tax dollars…fund the culture of death that the abortion industry promotes?” state Sen. Don Huffines (R-Dallas) asked as SB 4 was being discussed.

Other Republican state senators tweeted their support during the floor discussion of SB 4 using the hashtag #GoFundYourself. This isn’t the first time an effort to financially cripple Planned Parenthood has worked its way through the Texas Legislature. In 2011, Texas lawmakers passed their 2013 budget, which banned Planned Parenthood from receiving funds through Healthy Texas Women, the state’s women’s health program. Texas also cut family planning funding by two-thirds that year, as Jia Tolentino notes in The New Yorker.

But the news for Texas women out of the special session isn’t all bad. The state has the highest maternal mortality rate in the developed world, according to research from the American College of Obstetrics and Gynecology, and last week, the Senate extended the funding for the Task Force on Maternal Mortality and Morbidity through 2023. It’s a rare bright spot for women’s health in an otherwise bleak two weeks. But then again, there are two more weeks left in the session.