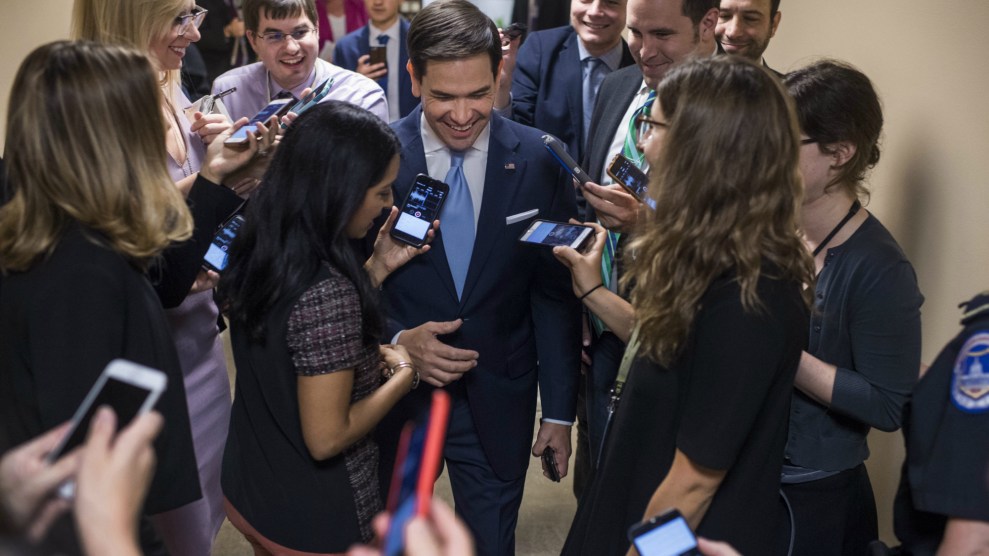 Donald Trump Jr. provided some fire to go with all the smoke over possible Trump campaign collusion with Russia, but Senate Republicans aren’t rushing to the alarms.

With his hand forced by the New York Times, Tuesday morning President Trump’s eldest son released emails showing that he enthusiastically sought help from the Russian government in obtaining information he hoped would be damaging to Hillary Clinton. The bombshell contradicted months of denials by the president and his surrogates that his campaign communicated with Russians as part of a coordinated effort to defeat Clinton, and also junked a longstanding claim by Trump backers that there is zero evidence of collusion between the parties in question.

Instead of outrage, though, GOP senators communicated a clear desire to avoid opining on the revelations.

In his weekly pen and pad session with reporters, Senate Majority Leader Mitch McConnell (R-Ky.) declined to comment on the Donald Jr. news, beyond asserting confidence that the Senate Intelligence Committee will “get to bottom of it.”

Burr also warned against “forming a conclusion based on one email release.”

Even some of the president’s least stalwart GOP allies seemed keen to avoid judgement. “I haven’t read the emails,” Sen. Marco Rubio (R-Fla.), a member of the Senate Intelligence Committee, told reporters. “I don’t know [much] other than what’s been reported in the press. I imagine the Intelligence Committee will look at that as part of an overall process.”

Responding to a question about whether or not the emails show an effort to collude with the Kremlin, Rubio sidestepped. “That’s something Mr. Mueller will have to determine,” he said, referencing Special Counsel Robert Mueller and his Justice Department investigation into Russian interference.

Sen. Lindsey Graham (R-S.C.), who heads a Senate Judiciary subcommittee that has looked into issues related to Russian election meddling, called it “problematic” that Trump Jr., the president’s son-in-law Jared Kushner, and former campaign chief Paul Manafort attended a Trump Tower meeting with a Kremlin-connected lawyer who was supposedly going to provide dirt on Clinton. But Graham noted it did not appear that the Trump campaign actually received Russian aid as a result of this meeting. According to US intelligence agencies, of course, the Russians did provide assistance after the meeting, by releasing embarrassing emails stolen from the Democratic National Committee and the Clinton campaign.

Asked by Mother Jones if that was a coincidence, Graham responded, “I don’t know. I know that lady didn’t help them.”

Meanwhile, Sen. Susan Collins (R-Maine), a Senate Intelligence Committee member who has previously pressed fellow Republicans to investigate Russian meddling more aggressively, struck a similar note. Collins said “it would premature to judge” whether the Trump campaign tried to collude, but that the committee should interview Trump Jr. and others involved in the Trump Tower meeting. “We’re still in the early stages of this investigation,” Collins said.

Senate Foreign Relations Committee Chairman Bob Corker (R-Tenn.), meanwhile, tried to completely avoid the topic. Corker was eager to discuss the progress of legislation he’s been pushing that would impose new sanctions on Russia for interfering in US politics, and he suggested the new evidence of Moscow’s activities in the 2016 election were an unsubstantial matter outside his lane. “Talk to others about politics,” Corker said. “Talk to me about policy.”