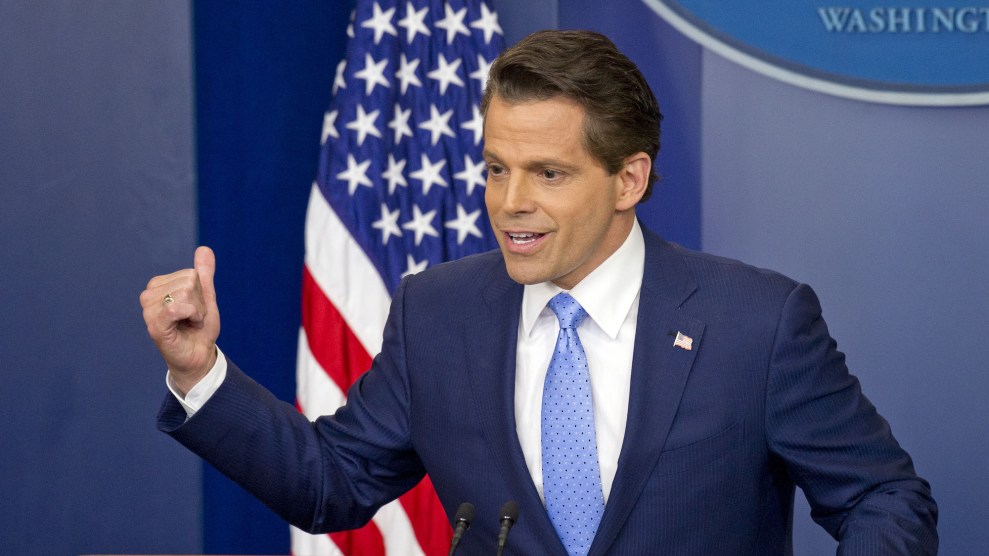 Anthony Scaramucci’s appointment as White House communications director is supposed to help President Trump move his messaging away from the relentless Russia scandal—but first Scaramucci may have to get past his own Russia issue.

Since January, Sen. Elizabeth Warren (D-Mass.) has pressed the Trump administration to determine whether Scaramucci, at a January meeting, may have broken the law by discussing possible joint investments with the head of a Russian sovereign wealth fund that is under US sanctions. The White House and the Treasury Department have so far blown off Warren’s inquires.

Her questions include “if Mr. Scaramucci may have violated current U.S. sanctions law; if he made any implicit or explicit promises related to the relaxation of U.S. sanctions on Russia; if President Trump or other Trump Administration transition officials were aware of Mr. Scaramucci’s contacts” with the Russian fund.

“An individual under investigation for such violations should not be nominated to serve in the U.S. government,” Warren wrote in a June 15 letter to President Trump, citing reports that Trump planned to pick Scaramucci for an ambassadorial post.

“I think the sanctions had in some ways an opposite effect because of Russian culture,” Scarmucci said after his meeting with the sanctioned Russian investment firm.

Bloomberg News first reported the January 16, 2017 meeting in Davos, Switzerland, where Scaramucci—then advising Trump’s transition effort—met with Kirill Dmitriev, head of the Russian Direct Investment Fund, which was among Russian financial firms covered by 2015 sanctions implemented after Russia’s annexation of Crimea. The sanctions bar Americans from conducting various financial transactions with the entities named. Scaramucci at the time ran a hedge fund, SkyBridge Capital (which he soon announced he was selling to a Chinese conglomerate).

The day after the meeting with Dmitriev, Scaramucci told the Russian state news agency TASS that US sanctions on Russia don’t work. “I think the sanctions had in some ways an opposite effect because of Russian culture,” he said. “I think the Russians would eat snow if they had to. And so for me the sanctions probably galvanized the nation with the nation’s president.”

In the interview, Scaramucci said about Trump: “The president-elect has the vision to see enough common interests where, hopefully, in a year from now the relationship with the Russian people and the Russian government and the United States will be better than it is today. That’s our hope.”

In letters to Treasury Secretary Steve Mnuchin, Warren asked the agency to determine if Scaramucci had facilitated or promoted “prohibited transactions” with the Russian fund. She also asked Treasury to investigate whether “Scaramucci or any other member of the…Trump Administration has any financial interest” in the fund.

In a brief letter to Warren prior to his confirmation, Mnunchin said he would ensure the department assessed “whether further investigation of this matter is warranted.” On May 12, Matt Kellog, Treasury’s deputy assistant secretary of legislative affairs told Warren that her letters, “like all congressional inquiries concerning economic sanctions enforcement” were forwarded to the department’s Office of Foreign Assets Control.

A Warren spokeswoman said the senator had received no further response, but would continue to pursue the issue.

The White House and Treasury Department did not respond to inquiries on Friday.