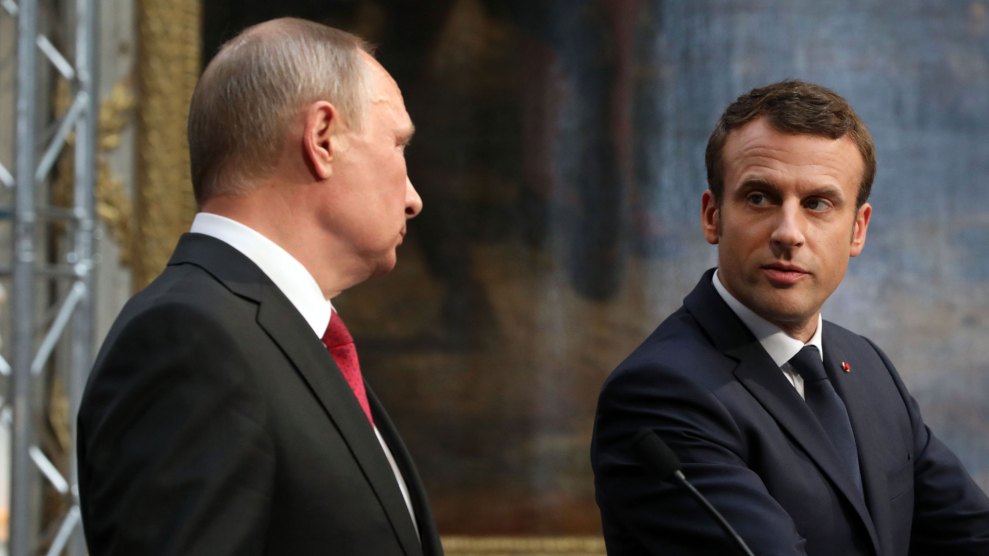 During a press conference in Poland on Thursday, a reporter asked President Donald Trump point blank if he believes Russia tried to interfere with the 2016 US election. “I think it was Russia and I think it could have been other people and other countries,” Trump responded. He added vaguely, “I think it’s been happening for a long time. I think it’s been happening for many, many years.” Once again, he avoided pointing a finger directly at Russian President Vladimir Putin, whom he will meet with on Friday at the G20 summit in Germany.

“We never interfere in the political life and the political processes of other countries,” Vladimir Putin said with a straight face in May. Yet for more than a decade, the Russian leader has sought to sway elections and destabilize democratic nations through a variety of means, from cyberattacks to military invasion. By sowing chaos, confusion, and discontent abroad, Putin hopes to shore up Russia’s standing and distract from economic and political problems at home. Here’s how his ambitions have played out around the world.

The Baltics: The Kremlin has long tried to exert remote control over these former Soviet states, most notably Estonia. When Estonia moved a Russian World War II memorial in 2007, its government and financial institutions were hit with a distributed denial-of-service (DDoS) attack and the country’s internet access was temporarily shut off. The first-of-its-kind cyberattack was dubbed “Web War One.”

Ukraine: Just before Ukraine’s 2014 presidential election, a pro-Russian hacking group took down the country’s election commission—and its backup system. They changed the results and the media briefly reported the wrong winner, though Russia’s preferred candidate eventually lost. Moscow then allegedly unleashed a massive DDoS attack to disrupt Ukraine’s internet, wiping out part of the country’s power grid. After that, it helped pro-Russia rebels take over Crimea, bringing the area under Moscow’s control. Russia has armed pro-Russian separatists in eastern Ukraine, fueling a bloody civil war that continues today.

Georgia: In 2008, Georgia sent in troops to quell a pro-Moscow separatist movement in South Ossetia. Russia responded with a land, air, and online invasion. A year later, on the anniversary of the assault, Russia reportedly shut down Twitter and disrupted Facebook in Georgia. This March, Putin incorporated South Ossetia’s separatist army into the Russian military’s command structure.

Netherlands: A Dutch Safety Board investigation into the Malaysia Airlines plane shot down over eastern Ukraine in July 2014 concluded that a Russian-made missile fired from pro-Russian rebel-held territory was responsible. In October 2015, security experts accused the Russian-backed hackers of attemp­ting to break into Dutch government computers to steal the report before it was released.

Germany: In May 2015, German intelligence accused a group “steered by the Russian state” of penetrating parliamentary computers to try to steal information about politicians and the inner workings of the German government. Russia is also believed to have been behind misinformation campaigns and cyberattacks ahead of Germany’s federal elections in September 2017.

France: In 2015, Russian hackers were suspected of posing as the ISIS “Cyber Caliphate” and taking a French TV channel off the air for 18 hours. The reason for the attack was unclear, though it may have been a test run for future hacks on media outlets. (The same hacking group, Fancy Bear, is also suspected of perpetrating the attacks on the Democratic National Committee and others on several Western governments.) Russia has yet to be conclusively linked to the hack on Emmanuel Macron that occurred one day before he won the French presidential election in May. Voters, a French journalist told the New York Times, were prepared for Russian meddling and “didn’t want to get into that game.” In May, NSA director Michael Rodgers told a Senate committee that his agency had warned French officials before the election, “Look, we’re watching the Russians, we’re seeing them penetrate some of your infrastructure.”