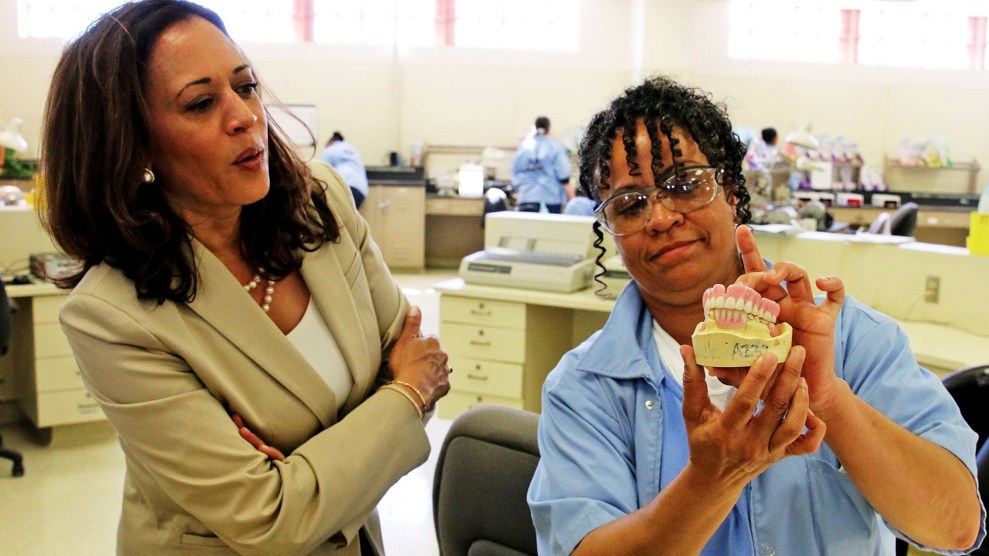 Sen. Harris visits a lab at the Chowchilla prison where women can get certified to make dental prostheses.Kristina Khokhobashvili

Democratic up-and-comer Kamala Harris visited just about every corner of California during her successful 2016 campaign to take over Barbara Boxer’s seat in the US Senate, and she’s kept it up somewhat since taking office. But on a recent, sweltering July afternoon, I accompanied Harris to a place where no senator has set foot for at least a decade.

The Central California Women’s Facility, which houses nearly 3,000 inmates, is tucked amid the farmlands of Chowchilla, about three hours from San Francisco—where Harris was elected district attorney in 2003. The first black woman in that role, Harris was keenly attentive to iniquities in the prison system. Now, despite the near-daily scandals roiling Washington, criminal justice reform remains her top legislative priority—hence the field trip. “I like to go to the scene,” Harris tells me. “I like to go out there, I like to see it, I like to smell it, hear it, feel it so that I can get an intuitive sense, as well as a theoretical or intellectual sense, of what’s going on.”

The sojourn was part of a broader effort to ensure that bipartisan progress on criminal justice reform, after stalling in Congress during the election season, doesn’t fade away entirely. Days after her prison visit, Harris would team up with Democratic Sens. Elizabeth Warren of Massachusetts, Cory Booker of New Jersey, and Richard Durbin of Illinois to introduce legislation—the Dignity for Incarcerated Women Act—that would among other things place female federal prisoners closer to their families, offer them parenting classes, and establish an ombudsperson at the Justice Department to make sure prisoners’ complaints about their conditions were at least heard.

Harris will ask lawmakers to pony up for programs specifically designed to support women coming out of prison.

Although she’s a freshman senator, Harris is well suited to lead reform efforts. Her 2009 book, Smart on Crime, outlines lessons she learned while implementing a reentry program (“Back on Track”) in San Francisco. People charged with low-level, nonviolent felonies were given the opportunity to avoid jail or prison—if they pleaded guilty and completed a course of job training and counseling, the crime would even be expunged from their records. The program was a success: As of 2009, fewer than 10 percent of the people who’d finished it had reoffended within two years (The comparable statewide recidivism rate for drug offenders was 54 percent.) Some of the “crucial policies and approaches to these crimes are outdated, ineffective, and astronomically expensive,” Harris wrote. “They deliver little in the way of safer communities while they drain our public coffers.”

The rising incarceration of women is of particular concern to Harris. A study published last year by the Vera Institute found that, since 1970, the number of women in jail has increased at a rate 14 times that of men. Women who wind up behind bars are uniquely vulnerable, according to the report, given that about 4 out of 5 are mothers—and often are saddled with raising children alone, in addition to battling the scourges of addiction or poverty or joblessness.

In March, Harris teamed up with colleagues from both parties to reintroduce the National Criminal Justice Commission Act, legislation that would create a top-to-bottom review of the justice system. On Tuesday, speaking at a Justice Action Network event titled “Women Unshackled,” Harris will implore fellow lawmakers to dedicate more resources toward helping incarcerated women deal with trauma—drug addiction, sexual abuse, etc.—and pony up to create new reentry programs designed especially for women’s needs.

Back in Chowchilla, flanked by a smattering of aides and prison officials, Harris enters a conference room in the prison’s mental health wing where chairs and low-slung black leather sofas have been arranged in a circle. Also present are four inmates chosen to meet the senator and discuss the ins and outs of their lives here. “If you were going to advise me on how to talk about what’s doing on the inside,” Harris asks the prisoners once everyone is settled, what would they say?

One by one, the women share their stories, talking about the circumstances that landed them in prison and the lives they’ve cobbled together inside. As they talk, Harris rattles off questions in rapid-fire style, the product of her two decades as a prosecutor—first in Alameda County, then San Francisco, and finally, in 2010, as California’s attorney general. Since taking her place in the Senate, Harris has generated a stream of headlines both for the things she’s said and for the things male colleagues haven’t let her say: On the Senate Select Intelligence Committee, she was twice interrupted by committee chairs while questioning witnesses. Attorney General Jeff Sessions, testifying before her committee, complained that Harris’ interrogation made him “nervous.”

Harris gets excited when a woman due for a parole hearing mentions Homeboy Industries. “Have you worked before?” she asks. “Have you already been accepted?”

In the prison conference room, Harris’ questions don’t seem to provoke any nerves—these women’s fates were already sealed by prosecutors and judges, after all. Rather, her questions elicit details: How old are you? What was your offense? Your sentence? What county were you sentenced in? When are you up for parole? Do you have children? What do you plan to do when you get out?”

One prisoner, age 28, is set to go before the parole board the following Monday. When she gets out, she says, she intends to work with Homeboy Industries—a training and support program that works with formerly incarcerated men and women in Los Angeles. Hearing this, Harris’ eyes light up and she betrays a small smile. She knows Homeboy Industries founder, Gregory J. Boyle, and admires the program’s low recidivism rates. “Have you worked before?” Harris probes. “Have you already been accepted?”

The woman replies that she’s never had a job—she’s been imprisoned all of her adult life. But “I’ve got time to figure it out, do it the right way.”

Another 28-year-old, a Pacific Islander with long, wavy black hair, talks about learning to build circuit boards in the facility’s workshop. Harris turns to prison staffers, eager to know whether this is a collaboration with organized labor—which could mean brighter job prospects for inmates after release. She then leans back toward the younger woman with her hands clasped, furrowing her eyebrows slightly when she hears something she disagrees with and raising them when she’s pleased.

“To be relevant , you have to have an acute sense of how your proposal will impact real human beings.”

A third inmate, a Navy veteran of Operation Desert Storm, talks about the attempted murder charge that landed her in prison decades ago. Harris asks her, and then the prison officials, how many women at Chowchilla were in the service. Veterans make up roughly 8 percent of the nation’s overall jail and prison population. At Chowchilla, 5 to 10 former service members meet occasionally for group therapy—some of them get military benefits that help them support their families, the inmate explains. (Incarcerated veterans and their dependents can still be eligible for certain benefits, depending on the severity of their crimes, according to the Department of Veteran’s Affairs.)

Harris’ aides told me that when their boss addresses lawmakers this week, she wants to get them thinking about the deeper problems that land people behind bars—at least half of incarcerated women have previously experienced at least one traumatic “event” (childhood sexual abuse, domestic violence), and 82 percent of female prisoners report some drug or alcohol dependency, according to the Vera report.

Harris arrived in Chowchilla hoping to use some of what she learned here to convince colleagues that money spent on improving reentry will be both a wise investment and a humane one—keeping women out of prison and reducing the burden on taxpayers. “To be relevant in elected office, I strongly believe you have to have an acute sense of how your proposal will impact real human beings,” she told me. “It’s more than a beautiful speech.”