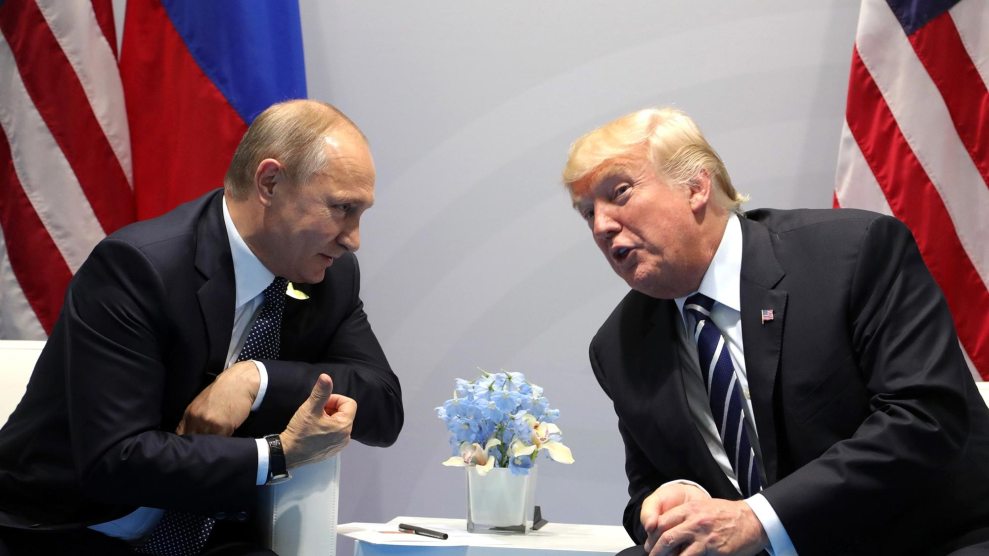 Update: Following the Senate’s passage of a bill toughening sanctions against Russia, the Kremlin swiftly retaliated by seizing two properties used by US diplomats and ordering the reduction of US embassy staff by September 1.

Democrats and Republicans in Congress have finally found something to agree on: tying Trump’s hands when it comes to Russia.

On Thursday night, the Senate overwhelmingly passed a bill, by a 98-2 vote, that imposes new sanctions on Russia and gives Congress the power to block future efforts by the president to ease sanctions. The bill passed the House 419-3 earlier this week.

The swift and nearly unanimous passage of this bill is a stinging rebuke to President Trump, who has shown interest in scaling back sanctions on Russia and sought to block passage of the measure. White House aides have offered conflicting messages about whether Trump will sign the bill: “He may sign the sanctions exactly the way they are, or he may veto the sanctions and negotiate an even tougher deal against the Russians,” Anthony Scaramucci, the new White House communications director, said on CNN. But just a few days earlier, White House Press Secretary Sarah Huckabee Sanders said that “the administration is supportive of being tough on Russia…We support where the legislation is now.”

Even if Trump were to veto the measure, members of Congress are saying the President can’t stop it. Senate Foreign Relations Chairman Bob Corker (R-Tenn.) and Sen. Ben Cardin (D-Md.), the top Democrat on the panel, said they were certain Congress would override a veto if necessary. Sen. Corker told Mother Jones Wednesday that he does not take Trump’s threats to veto the measure seriously since a veto override would almost certainly follow.

“Self-flagellation is not something worth engaging in,” Corker said.

Other Democrats echoed the sentiment: Sen. Mark Warner, (D-Va.) the top Democrat on the Senate Intelligence Committee, said in a statement that Trump should sign the legislation “as soon as it hits his desk. Otherwise, he risks encouraging Russia’s interference in future elections.”

If the bill becomes law, the US risks a number of serious retaliatory measures from the Kremlin.

At a Thursday press conference, Russian president Vladimir Putin made his intentions known. “We are behaving in a very restrained and patient way, but at some moment we will need to respond,” he said. “It’s impossible to endlessly tolerate this kind of insolence towards our country.” Meanwhile, Konstantin Kosachev, the head of the foreign relations committee in the upper house of Russian parliament, took to Facebook on Wednesday to call for a response from Russia that would be “painful for Americans.”

A Thursday report in Kommersant, a major Russian newspaper, offered some additional details about a potential Kremlin response. Kommersant cited two unnamed sources inside Russia’s foreign ministry who said that Moscow is considering expelling 35 American diplomats from the country—mirroring the Obama administration’s decision to expel 35 Russian diplomats in December 2016 as punishment for Russia’s interference in the US election.

Other potential retaliation, according to Kommersant, includes reducing the number of American staff allowed to work at the US embassy in Moscow, voting against the US on the UN Security Council (particularly on North Korea-related issues), seizing assets of US companies operating in Russia, and placing restrictions on the operations of major US companies, from Coca-Cola to Google.

“This is certainly the Russian side signaling that prospects for improved relations are now bleak,” Matthew Rogansky, who studies Russian foreign policy at the Woodrow Wilson Center in Washington, tells Mother Jones. While the Russians say they put off tit-for-tat retaliation for December 2016 sanctions imposed by the Obama administration to give Trump time try to improve relations, the new Kremlin measures appear to include that deferred response, Rogansky said. “This may be the Russian side saying, in effect, ‘enough is enough,'” he said.