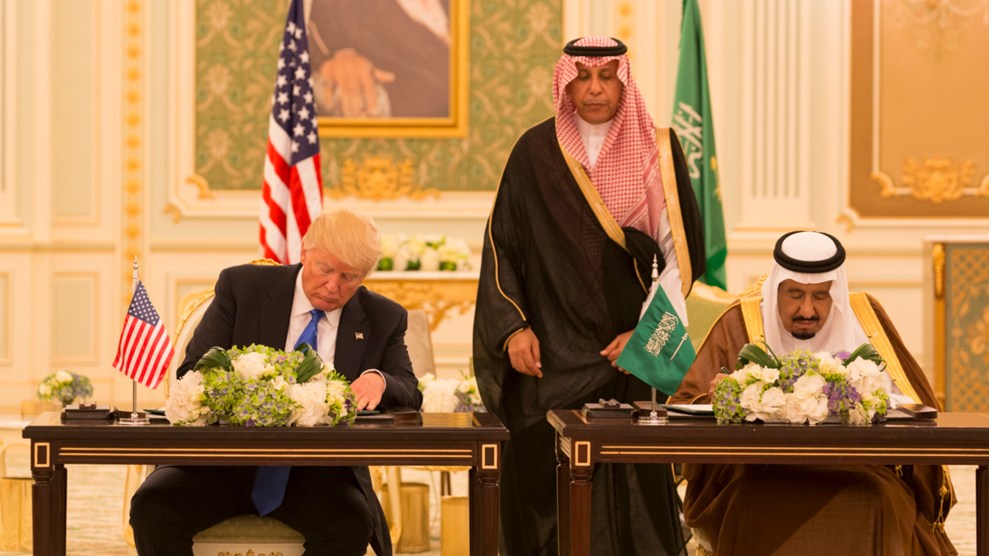 In mid-May, President Donald Trump announced that he’d applied his legendary dealmaking skills to close one of the largest arms sales in history. His administration hyped the $110 billion deal to supply Saudi Arabia with American-made ships, planes, bombs, and other military as an diplomatic and economic success. White House spokesman Sean Spicer claimed the weapons sale and other investment deals with the Saudis would create employment for hundreds of thousands of Americans:

Beyond $109b in military sales, @potus deal w US & Saudi Arabia incs another $250b commercial investment creating hundreds of 1000s US jobs

During his subsequent visit to the Middle Eastern kingdom, Trump and King Salman bin Abd al-Aziz Al Saud participated in an signing ceremony in that seemed to seal the deal.

Now it seems that the weapons trade—like so many Trump “wins”—is not what it seems. In a blistering assessment of the deal, Bruce Reidel, a senior fellow at the Brookings Institution, writes, “It’s fake news”:

I’ve spoken to contacts in the defense business and on the Hill, and all of them say the same thing: There is no $110 billion deal. Instead, there are a bunch of letters of interest or intent, but not contracts. Many are offers that the defense industry thinks the Saudis will be interested in someday. So far nothing has been notified to the Senate for review. The Defense Security Cooperation Agency, the arms sales wing of the Pentagon, calls them “intended sales.” None of the deals identified so far are new, all began in the Obama administration.

A recent analysis by the New York Times also concludes that “Mr. Trump’s figures are inflated and premature.”

A look at the fine print shows that the smaller deals that make up the supposed $110 billion arms package are “intended sales” that have not been finalized. As the Pentagon itself notes, actual arms sales will occur only after the “normal” review process, which includes officially notifying Congress. Additionally, the Times reports, the administration appears to have double counted its proposed arms deals in its tally of new Saudi investments in American companies. And Reidel says it’s not clear that Saudi Arabia can actually afford $110 billion in weapons, “due to low oil prices and the two-plus years old war in Yemen.”

Some analysts noted that the Saudi arms deal was too good to be true when it was first announced. “Where are they gonna get $100 billion worth of stuff to sell? I don’t see where it is going to come from—are we going to ship our whole Navy over there?” William Hartung, director of the Arms and Security Project at the Center for International Policy, told Mother Jones in May. Hartung also predicted that the deal might prove as illusory as Trump’s other headline-grabbing stunts: “It seems like part of this is: Trump just likes big numbers. It’s like when he claims credit for jobs he didn’t really help create.”

Sure enough, the White House’s claims that the arms deal will generate thousands of US jobs aren’t holding up. When the Washington Post contacted American weapons makers, none would—or could—say if they would hire more people to supply the Saudis:

A spokesman for Raytheon, one of the companies that along with Lockheed Martin, Boeing and General Dynamics signed memorandums of understanding with Saudi Arabia as part of the deal, was unable to even speculate as to whether or how many jobs the arms package will add. […]

Reidel concludes that the whole thing was an exercise in wishful thinking: “What the Saudis and the administration did is put together a notional package of the Saudi wish list of possible deals and portray that as a deal. Even then the numbers don’t add up.” Yet again, the shine has quickly rubbed off of a gold-plated Trump deal.