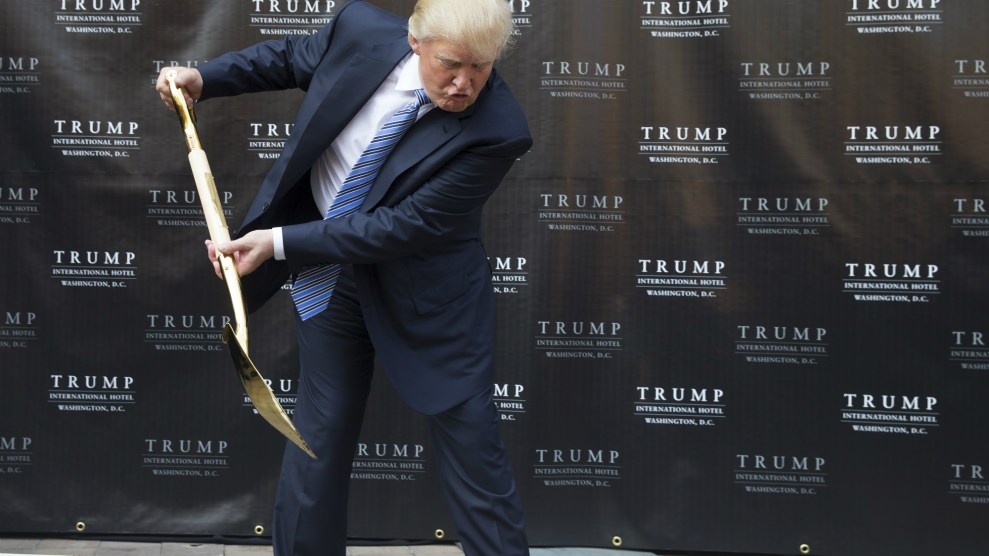 Donald Trump’s business fortunes have ebbed and flowed over the decades, as he’s tried to break into gambling, airlines, television, steaks, and golf courses. But the core of his empire has always been selling real estate, and it suddenly appears that business could be struggling. Trump’s 2017 personal financial disclosure, released on Friday, shows a decline in condo and land sales from his previous two filings. Moreover, in the past six weeks his company has slashed the listing prices for several of his high-end New York City condos.

Three condos at Trump’s 502 Park Avenue building have had their prices slashed in recent weeks.

The apparent downturn could be explained by Trump perhaps having less inventory. Maybe the easiest-to-sell properties have already been sold. In the past, Trump has been able to replenish his supply by purchasing new buildings to renovate and resell as condos, or by taking over a new golf course to chop up and sell off some of the land. During his candidacy—and now with Trump’s adult children in charge of the family business—the Trump Organization hasn’t been shy about pursuing new licensing or management deals. But the business hasn’t announced any major new land or condo projects since Trump entered the presidential race in 2015.

But Trump actually does have plenty of inventory. Judging by a small—but hard-to-ignore—sampling of Trump properties on the market, it seems possible that Trump is having trouble selling his units. For example, in one of his New York City buildings, 502 Park Avenue, Trump owns a total of four penthouse units, 13 regular condo units, and two commercial condo units. Three are publicly listed for sale through his real estate firm, and each had their list prices cut in the past six weeks.

That includes a penthouse unit on the 31st floor. Trump has attempted to sell this property for years, bumping the price up and down. In recent days, the price was slashed to a new low. It was originally put on the market in 2007 with a $45 million price tag. Trump increased the ask to $51 million in 2008. But the unit didn’t move. In 2015, Trump slashed the price to $35 million, and that remained the price for two years. Now, according to Trump International Realty, the realty firm Trump owns, the price has been cut to a new all-time low: $29.5 million.

This pattern runs counter to the overall direction of the New York City condominium market, which, according to Trump’s competitors and the real estate industry press, is actually booming. Yet shortly before the election, the New York Times found that sales in Trump buildings were noticeably slow and that owners were being forced to cut listing prices.

The one major success Trump has had this year is the sale of a different penthouse unit in the Park Avenue building, for just shy of $16 million. As reported by Mother Jones in March, the buyer was a Chinese American businesswoman with apparent ties to high-ranking Chinese government officials and organizations linked to Chinese military intelligence groups. The unit was never publicly listed, so there is no record of whether the property sold at a premium.