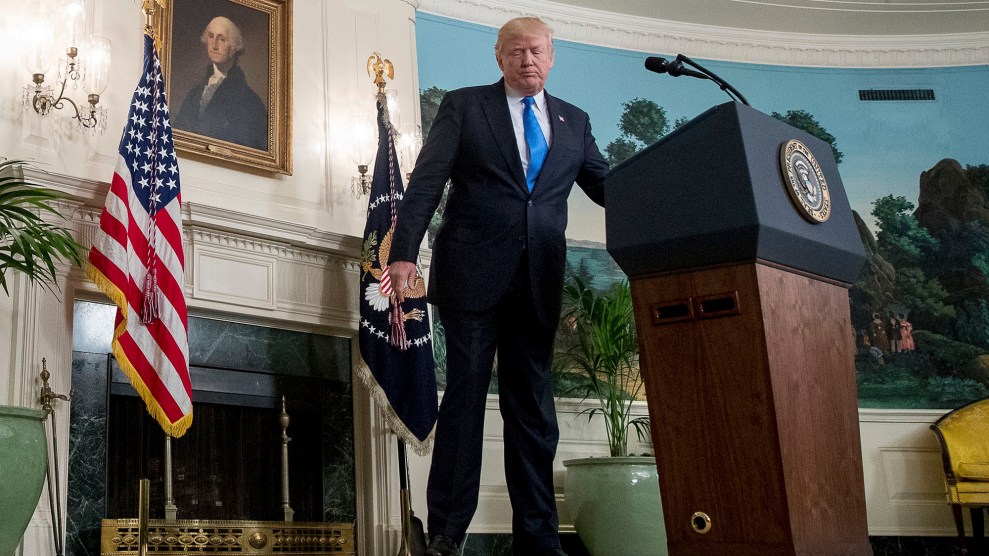 President Donald Trump was forced to amend his travel ban on Wednesday over legal concerns that the executive order‘s entry ban on nationals of six Muslim-majority countries would expire. But in doing so, he has damaged his own legal case to preserve the ban.

Two federal district courts and two appeals courts have blocked the main provision of the president’s executive order, which bans entry to the United States for people from Iran, Libya, Somalia, Sudan, Syria, and Yemen for 90 days. The 90-day clock was set to start ticking on the “the effective date of this order,” which the order designated as “12:01 a.m., eastern daylight time on March 16, 2017.” That implied that the ban would expire on June 14. With the ban on hold and its future in the hands of the Supreme Court, the president amended his order to clarify that the effective date of the ban is not March 16 but the date when the courts allow it to go into effect.

This is entirely within the president’s power and may have been a necessary remedy to the situation. But it also undermines the administration’s case that the ban is legal and constitutional. As Mother Jones has previously noted, the executive order’s main stated reason for an entry ban is to allow the federal government to conduct a review of worldwide visa vetting procedures. The ban, then, is in furtherance of the goal of revamping visa protocols, and once the review is complete and new review processes are put in place, the ban is, by the order’s own reasoning, no longer needed. So what is the point of a ban whose effective date is no longer tied to the review and could now continue long after the review is completed?

There is a very real possibility this could happen. Last week, the 9th Circuit Court of Appeals lifted an injunction against the internal review, allowing the government to begin this process, even though the ban is still on hold. If the Supreme Court decides to allow the injunction against the entry ban to remain in effect until it debates the merits of the case this fall, which is likely, then the review will have been completed while the government continues to push for the ban. (The order instructs the government to complete its report within 20 days, implement it within another 50 days, and file a report to the president on its implementation 20 days after that—a total of 90 days. The government should have been able to work on this review between January 27, when Trump signed the first version of the order, and March 6, when he replaced it with a revised version.)

It’s a point that legal scholars believe could prove fatal to the ban in court. “[T]he government has undermined its own oft-repeated rationale for the order,” Leah Litman, a professor at the University of California, Irvine School of Law noted in a blog post Wednesday. “The government has also further weakened the claim that its entry ban is, or ever was, enacted for national security purposes.” Indeed, if the government wants a ban even after the review is finished and safer vetting protocols are in place, that raises the question of whether national security was simply a pretext for the president to implement the Muslim ban that he promised during the campaign.

A majority of the Supreme Court justices could decide that they believe the assertion that the ban is necessary for a review and allow the ban to go into effect immediately, so that the two processes can happen in tandem. But it’s more likely, and logical, that the new expiration date would raise troubling questions for the justices.

As the constitutional and national security expert Stephen Vladeck of the University of Texas School of Law noted on Twitter:

12. Second, and on the merits, what's the legal justification for the ban if it wasn't necessary in first place to achieve the stated goal?

“Whatever the answers,” he concludes, “it appears that the case for #SCOTUS to stay the #TravelBan injunctions is getting weaker by the filing.”

The likelihood that the government will ultimately prevail on the merits is weaker now, too. As noted before, the more tenuous the order’s own justification for the ban, the more likely the court will turn to the president’s incendiary statements during the campaign and on Twitter to determine the goal of the ban. And when that happens, the courts have thus far found that the order may in fact represent unconstitutional discrimination against Muslims.