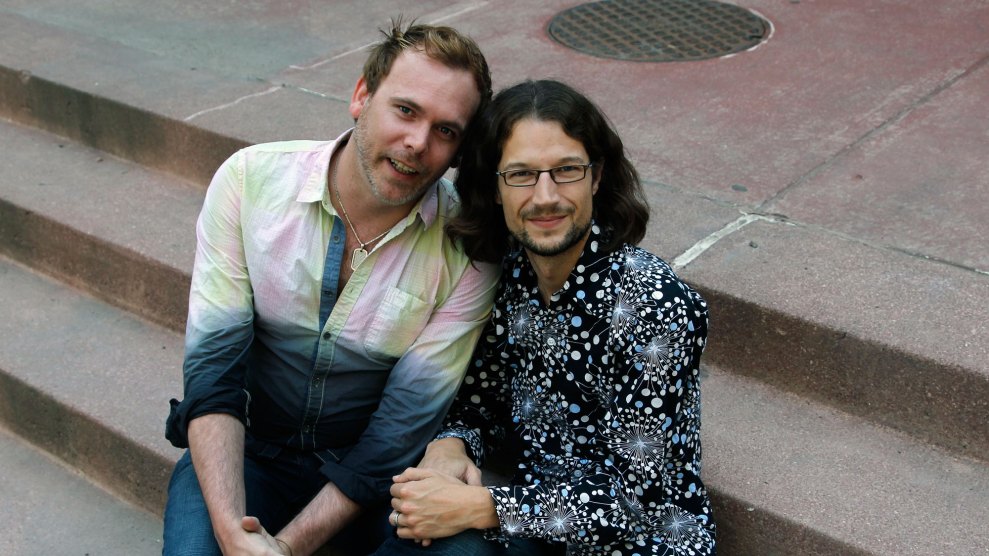 Dave Mullins and husband Charlie Craig, who sued a Colorado bakery for refusing to make a cake for their same-sex nuptials.Brennan Linsley/AP

The Supreme Court this morning finally decided what to do with one of the most controversial cases on its docket, Masterpiece Cake Shop v. Colorado Civil Rights Commission. The petition, which has been pending before the court since January, asks the justices to decide whether private parties can refuse to do business with gay and lesbian clients based on religious objections to same-sex marriage. Here’s how we described the case earlier this year:

In 2012, a Colorado baker named Jack Phillips refused to make a custom wedding cake for two men getting married in Massachusetts, one of the few states where same-sex marriage was legal at the time. The couple was planning a reception in Colorado, where they lived and wanted to celebrate. Phillips claimed making the cake would violate his religious beliefs. The couple sued and has prevailed at every level in Colorado courts, which found that baking a gay wedding cake would not violate Phillips’ free speech or religious freedom rights, but refusing to make one would constitute illegal discrimination based on sexual orientation.

In 2014, the court declined to hear a similar appeal from a photographer who refused to document a same-sex New Mexico couple’s commitment ceremony. The state court had ruled that refusing to serve the couple violated the state’s public accommodations law, which bans such discrimination. The Supreme Court passed on hearing the case, leaving the lower-court ruling in favor of the couple intact.

The court clearly wrestled with the cake shop case, having relisted it for every weekly conference since January before finally deciding to take it up during the last week of the term. It seems custom-made for the court’s newest justice, Neil Gorsuch, who was one of the lower-court judges who ruled in favor of Hobby Lobby, the craft store that claimed providing health insurance to its employees that covered contraception violated its corporate religious freedom rights. The Supreme Court later upheld that ruling in a 5-4 decision. At the time, critics warned it would be used to justify the kind of anti-gay discrimination at issue in the cake case.

Gorsuch wrote a separate concurrence in the Hobby Lobby case, in which he argued for an even broader ruling that would have allowed more parties to challenge the contraceptive mandate on religious grounds. He explained, “All of us face the problem of complicity. All of us must answer for ourselves whether and to what degree we are willing to be involved in the wrongdoing of others. For some, religion provides an essential source of guidance both about what constitutes wrongful conduct and the degree to which those who assist others in committing wrongful conduct themselves bear moral culpability.”

“For some, religion provides an essential source of guidance both about what constitutes wrongful conduct and the degree to which those who assist others in committing wrongful conduct themselves bear moral culpability.”

If Gorsuch believes same-sex marriage is a form of “wrongdoing” that religious people could rightfully object to, his opinion doesn’t bode well for David Mullins and Charlie Craig, the gay couple at the heart of the Masterpiece case—or for LGBT civil rights more broadly.

The ACLU, which is representing the couple, had hoped that the court would simply decline to hear it and let the Colorado decision stand. A ruling in favor of the baker could roll back years of progress made by LGBT civil rights groups in combating discrimination, allowing all sorts of businesses to close their doors to gays and lesbians simply by invoking a religious objection. Mullins and Craig released a statement after hearing the news that the court would indeed be hearing their case.

“This has always been about more than a cake,” Mullins said. “Businesses should not be allowed to violate the law and discriminate against us because of who we are and who we love.” His husband, Craig, added, “While we’re disappointed that the courts continue debating the simple question of whether LGBT people deserve to be treated like everyone else, we hope that our case helps ensure that no one has to experience being turned away simply because of who they are.”