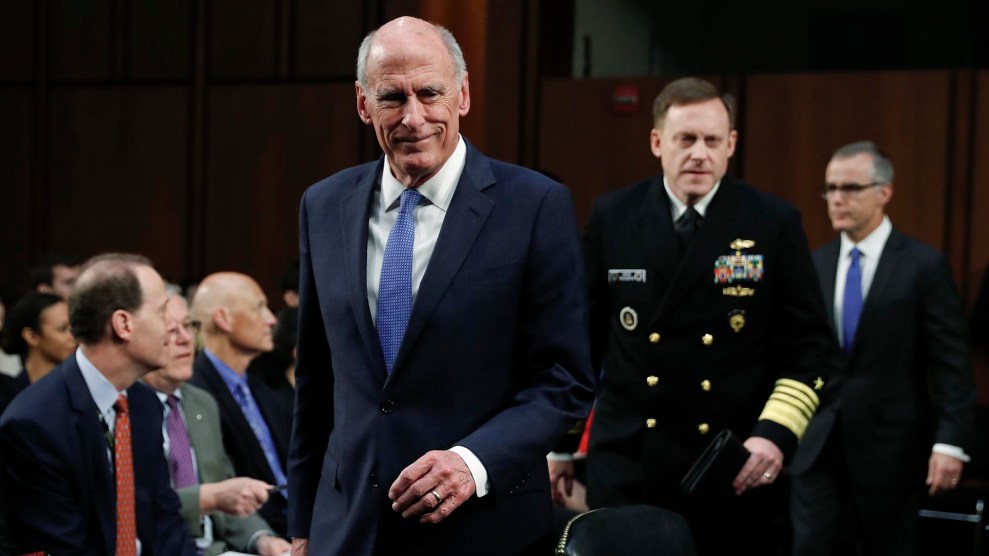 Two of the nation’s top intelligence officials refused Wednesday to say whether President Donald Trump asked them to try to blunt or impede the FBI’s Russia investigation.

Appearing before the Senate intelligence committee, NSA Director Adm. Michael Rogers and Director of National Intelligence Dan Coats repeatedly declined to answer questions about a bombshell Washington Post story, published Tuesday evening, alleging that Coats had told associates that Trump in March had asked him and CIA Director Mike Pompeo if they “could intervene with then-FBI Director James B. Comey to get the bureau to back off its focus on former national security adviser Michael Flynn in its Russia probe.” That story lines up with a May 16 New York Times report that, according to a memo Comey wrote before Trump fired him, Trump had asked Comey to “shut down” the Flynn investigation. And on May 22, the Washington Post reported that Trump had asked Coats and Rogers to publicly “push back against an FBI investigation into possible coordination between his campaign and the Russian government.”

Though the official topic of the committee hearing was the reauthorization of a key surveillance law, Democrats on the committee, joined by a few Republicans, pressed the witnesses—a group that also included acting FBI director Andrew McCabe and Deputy Attorney General Rod Rosenstein—on whether Trump had pressured top intelligence officials regarding the Russia investigation. Responding to the first questions on this subject, Coats and Rogers each insisted they had not felt pressured by Trump. But each refused to discuss their conversations with the president. McCabe refused to discuss any conversations he’d had with Comey regarding Comey’s discussions with Trump. Rosenstein also declined to discuss conversations related to Trump’s dismissal of Comey.

None of the four witnesses provided solid legal rationales for their refusal to provide answers on this front, and they did not say that the president had invoked executive privilege. Rogers and Coats stated that they felt it would not be appropriate to discuss such matters. This frustrated several members of the committee.

Sen. Marco Rubio (R-Fla.), noted that Coats and Rogers had said they had not felt “pressured” by Trump. Rubio pointedly asked, “Are you prepared to say that you have never been asked by the president or the White House to influence an ongoing investigation?” Neither would directly answer that query. Coats said he wouldn’t share what he considered “confidential information that ought to be protected in an open hearing.”

Rubio countered that he wasn’t asking for classified information; he just wanted to know whether Coats or Rogers had been asked to influence an ongoing investigation.

“I’m just not going to go down that road in a public forum,” Coats said, adding that he’d be willing to answer questions from special counsel Robert Mueller if asked.

“I stand by the comments I’ve made. I’m not interested in repeating myself, sir. And I don’t mean that in a contentious way.”

Rogers said he was standing by the answer he had given earlier in the hearing when Sen. Mark Warner (D-Va.) asked whether Rogers had been pressured to get the FBI to back off Flynn. “In the three-plus years that I have been the director of the National Security Agency, to the best of my recollection, I have never been directed to do anything I believe to be illegal, immoral, unethical, or inappropriate,” Rogers told Warner. “Directed,” of course, is different than being asked.

Later in the hearing, Sen. Angus King (I-Me) pressed Coats and Rogers on their refusal to discuss their conversations with Trump about the Russia investigation. “Why are you not answering our questions?” a visibly angry King asked.

“Because I feel it is inappropriate, Senator,” Rogers replied.

After confirming that the president had not invoked executive privilege to prevent Rogers and Coats from discussing the matter, King again demanded that they “answer the questions.”

“I stand by the comments I’ve made,” Rogers said. “I’m not interested in repeating myself, sir. And I don’t mean that in a contentious way.”

“Well, I do mean it in a contentious way,” King said. “I don’t understand why you’re not answering our questions.”

Rogers said that “those conservations were classified” and that it is “not appropriate in an open forum to discuss those classified conversations.”

“What is classified about a conversation involving whether or not you should intervene in the FBI investigation?” asked a clearly exasperated King.

“Sir, I stand by my previous comments,” Rogers responded.

Watch this intense exchange between Sen. Angus King and intelligence chiefs: “I don’t understand why you’re not answering our questions.” pic.twitter.com/CWmwfISBHK

King also pressed Coats to justify his decision not to answer the Senators’ questions. “What is the legal basis for your refusal to testify to this committee?” King asked.

“I’m not sure I have a legal basis,” Coats said.

The hearing demonstrated how tough it might be for Congress to determine whether Trump has indeed leaned on intelligence officials to smother or counter the FBI’s Russia investigation, which is now being overseen by special counsel Robert Mueller. Without being instructed by the White House to keep mum about their conversations with Trump, Coats, Rogers and the others refused to cooperate fully. Democrats on the committee were upset by this, but only a few Republicans seemed bothered. And Sen. Richard Burr (R-NC), the committee chairman, did not appear frustrated.

It is well within the intelligence committee’s purview to determine whether the president has tried to impede a national security investigation focused on a covert operation mounted by Russia to subvert an American election. Wednesday’s testimony showed that to get to the bottom of that, the committee will have to fight for the necessary information—and it’s unclear whether Burr and his fellow Republicans are willing to engage in such a battle.