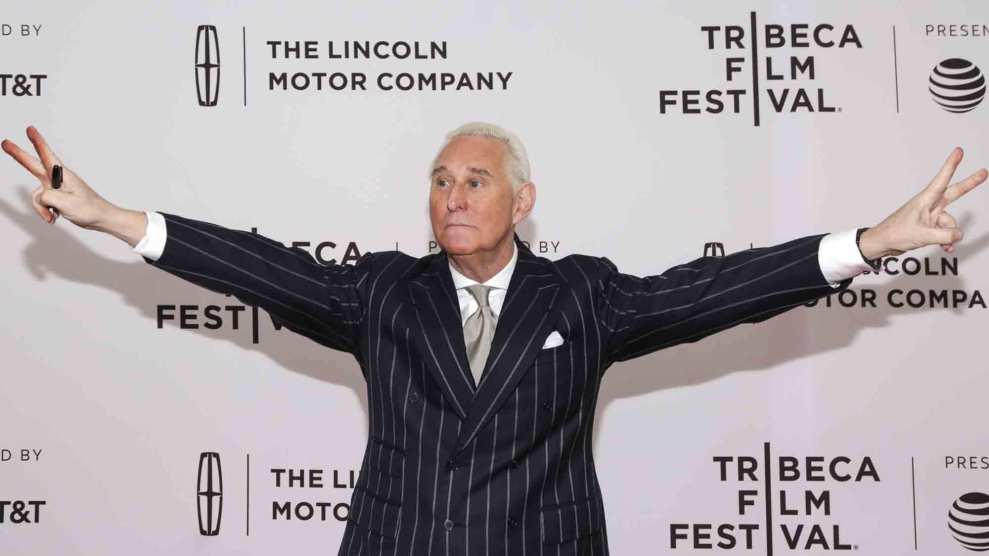 Last week, the Guardian published a report revealing a new and odd twist in the Trump-Russia scandal: Nigel Farage, the British politician who led the Brexit movement in Great Britain, is a “person of interest” in the FBI investigation of interactions between Trump associates and the Russian government. The newspaper reported that Farage was under FBI scrutiny because he had relationships with both the Trump camp and WikiLeaks, which disseminated Democratic emails swiped by Russian hackers in an effort to help Donald Trump’s presidential campaign. Farage dismissed the story as “hysteria” and said he had not been contacted by the FBI. But Farage did meet with Trump during the campaign. And a source close to the Trump camp tells Mother Jones that a Trump-Farage meeting was set up by Roger Stone, the veteran political dirty-trickster and long-time Trump adviser who has come under investigation in the Trump-Russia inquiry.

That source is Stone himself.

In the months since the election, Stone has drawn the attention of investigators and reporters because he made statements during the campaign that implied he possessed inside information about WikiLeaks’ plans to release material stolen in the hack-and-leak covert operation mounted by Putin’s regime to subvert the 2016 campaign and assist Trump. In early August—after WikiLeaks had disseminated Democratic Party emails hacked by Russian intelligence—Stone said at a Republican event in Florida, “I actually have communicated with [WikiLeaks founder Julian] Assange. I believe the next tranche of his documents pertain to the Clinton Foundation, but there’s no telling what the October surprise may be.” On October 2, he tweeted, “Wednesday@HillaryClinton is done. #Wikileaks.” (This was five days before WikiLeaks released the emails of Clinton campaign CEO John Podesta, which were stolen by Russian hackers.) That month, Stone claimed he had “a back-channel communication” with Assange through “a good mutual friend.” During the campaign, Stone also communicated with Guccifer 2.0, the online persona that posted hacked Democratic emails, and Stone publicly insisted Guccifer 2.0 was not connected to the Russians.

Stone’s prescient statements about WikiLeaks’ anti-Clinton dumps and his claim of a connection with Assange naturally have raised questions about his role in the Trump-Russia scandal. And the Guardian report on Farage partly focused on the Brit’s ties to Stone. The story raised the possibility that Farage might have been Stone’s contact with WikiLeaks.

After the Guardian article was published, Mother Jones asked Stone if Farage was Stone’s “mutual friend” who had been his go-between with Assange. Stone replied, “Dined with him once in Cleveland [during the GOP convention in July]. Got him a meeting with the candidate. Never spoke to him again.”

So did Stone hook up Farage and Trump? The two politicians had a much-noticed rendezvous when Farage, then the leader of the UK Independence Party, appeared with Trump at a campaign rally in Mississippi in late August and declared, “If I was an American citizen, I wouldn’t vote for Hillary Clinton if you paid me.” It was a moment when the conservative anti-European populism of England merged with Trump’s anti-establishment American Firstism. Farage spoke of pro-Brexit voters supporting the referendum to withdraw Great Britain from the European Union so “they could take back control of their country, take back control of their borders, and get back their pride and self-respect.” Farage urged the American people to “stand up against the establishment.”

A book written by a Farage associate and published in October reported that Farage’s partnership with Trump came about because the British politician, while attending the GOP convention, had a chance encounter at 4:30 a.m. in his hotel bar with an aide to Mississippi Gov. Phil Bryant, a Republican. The aide suggested Farage visit Mississippi and subsequently sent him a formal invitation. A month later, Farage flew to Mississippi, just when Trump was scheduled to speak at a Republican fundraiser and a campaign rally. Farage had dinner with Bryant and regaled him and other guests with Brexit stories. Bryant suggested Farage speak at the Trump rally the following night—after speaking at the GOP fundraiser. On a radio show the next morning, Farage announced he was in Mississippi to show his support for Trump. Steven Bannon, who had recently been named Trump’s chief strategist, called Farage to check what Farage intended to say at the Republican dinner and the Trump rally. Hours later, Farage met Trump for the first time, according to this account, in a holding room at the Republican fundraiser. Trump strode across the room and gave the British politician a bear hug.

This account makes no mention of Stone. I asked Stone how his assertion that he had set up a meeting between Farage and Trump squared with this report. He replied, “I suggested candidate [Trump] meet Farage immediately after the convention. Certain [Farage] asked others to secure a meeting. Don’t recall when it happened only that it did.” It’s unclear whether the meeting Stone says he brokered was the same as the Mississippi get-together.

Stone added, “You report so much bullshit why do you care about the facts?”

The facts here are intriguing. If the FBI is indeed examining Farage for his ties to Assange and the Trump crew, Stone’s interactions with Farage—and whether or not Stone really did connect him with Trump—could be relevant. The brash and brassy Stone, who relishes publicity and mud-slinging and who has written a book claiming LBJ killed JFK, has been an enticing target for Democrats and investigators pursuing the various threads of the Russia-Trump scandal. With the Farage connection, the plot thickens.

Farage did not reply to a request for comment. Neither did the White House.

UPDATE: A spokesman for Farage says, “Nigel met Roger Stone in a restaurant in Cleveland during the RNC purely by chance. They subsequently met each other in a hotel in Washington during Trump’s inauguration, again without planning and by chance. He did not organise any meeting between Mr Trump and Mr Farage.”