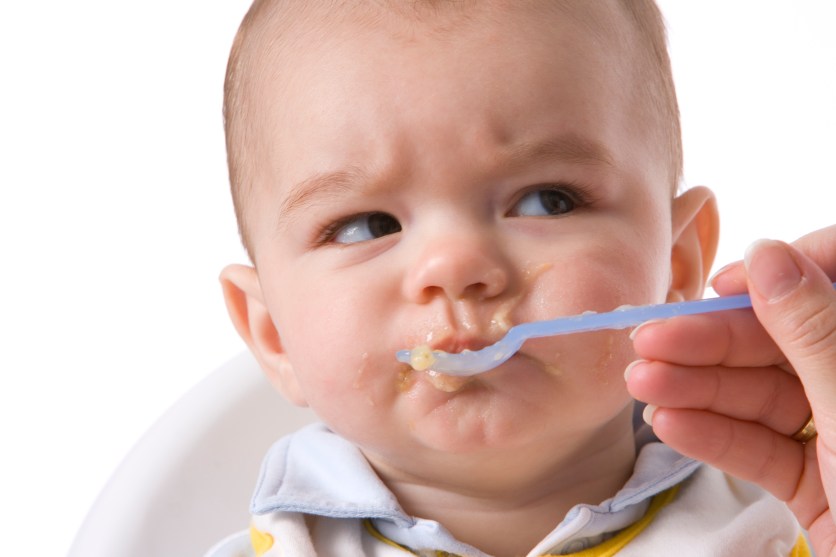 You may have caught wind of last week’s news that 20 percent of baby food—and 14 percent of  other food—contains lead. The finding came from a report by the Environmental Defense Fund (EDF), a nonprofit advocacy group. Here’s what you should know.

The baby foods that were most likely to contain lead were fruit juices, root vegetables, and cookies.

How do the researchers know that baby food contains lead? Four times a year, as part of the Food and Drug Administration’s Total Diet Study, agency workers go into grocery stores across the country and buy about 280 types of foods and beverages—from chicken pot pies to low-fat yogurt to whiskey. They test the samples for 800 different contaminants and nutrients and publish the results online. The EDF analyzed the FDA data from 2003 to 2013 and found that 20 percent of 2,164 baby food samples and 14 percent of the other 10,064 food samples contained lead. The baby foods that were most likely to contain lead were fruit juices, root vegetables, and cookies.

Which brands have the most lead? Nobody knows, because the FDA’s data doesn’t include brand names. We also don’t know why lead is more common in baby food than in other kinds of food. Tom Neltner, the chemicals policy director at the EDF and one of the authors of its study, told Mother Jones, “We’ve talked to manufacturers to try to find out and none of them have had an answer.”

How much lead is dangerous? Experts agree there’s no safe level of lead in food, especially for children. The heavy metal’s presence in blood has been linked to lower IQ, behavioral problems, and learning disabilities. The federal government banned the use of lead-based paint in toys, furniture, and residential properties back in 1978, but lead exposure has come under increased scrutiny since last year’s water crisis in Flint, Michigan. In June 2016, in the wake of that crisis, the American Academy of Pediatrics (AAP) released a report advising that all sources of lead exposure be eliminated—including lead-containing food and water.

So how is it legal for baby foods to contain lead? The FDA sets lead levels for candy likely to be consumed by small children, fruit juices, certain imported dried fruits, and bottled water—and that’s it. All other foods may get tested for lead as part of the agency’s Total Diet Study, and the FDA may issue a recall if routine testing finds a particular product to be consistently contaminated, but the agency doesn’t hold the food industry to any set standard for most products.

Even the existing limits are not consistent: For bottled water it’s 5 parts per billion, for juice it’s 50 parts per billion, and for imported dried fruits and certain candies it’s 100 parts per billion. What are these limits based on? “What is achievable…under good manufacturing practices,” according to the agency’s website. That’s not necessarily the same as what is healthy, Neltner points out.

How does lead get into food? A lot of ways. Lead in gasoline for cars was phased out by 1996, and lead arsenate remained a popular pesticide in apple orchards until it was banned in 1988, but a lot of that residue remains in our soils. Leaded paint, while banned for residential use, is still allowed for industrial purposes and is still common in countries that trade with the United States. Until January 2014, pipes labeled “lead-free” were allowed to contain up to 8 percent lead. Most private planes still run on leaded gas. All of these sources can find their way into soil, where they can be absorbed by crops.

Is the government going to do anything to get lead out of food? “I think the onus is really on FDA and industry to change their standards to reflect what we know, that there is no safe lead level,” said Jennifer Lowry, chair of the the AAP Council on Environmental Health Executive Committee, in a statement. “These are old standards they currently have and they haven’t been updated in decades.” The FDA says it’s reevaluating those standards, but President Donald Trump’s proposed budget doesn’t bode well for the agency.

How can I protect my kids? To reduce lead absorption from any single source, the AAP recommends a varied and well-balanced diet high in iron and calcium. It also recently released new guidelines for fruit juice consumption—notably, children under a year old shouldn’t drink juice at all.