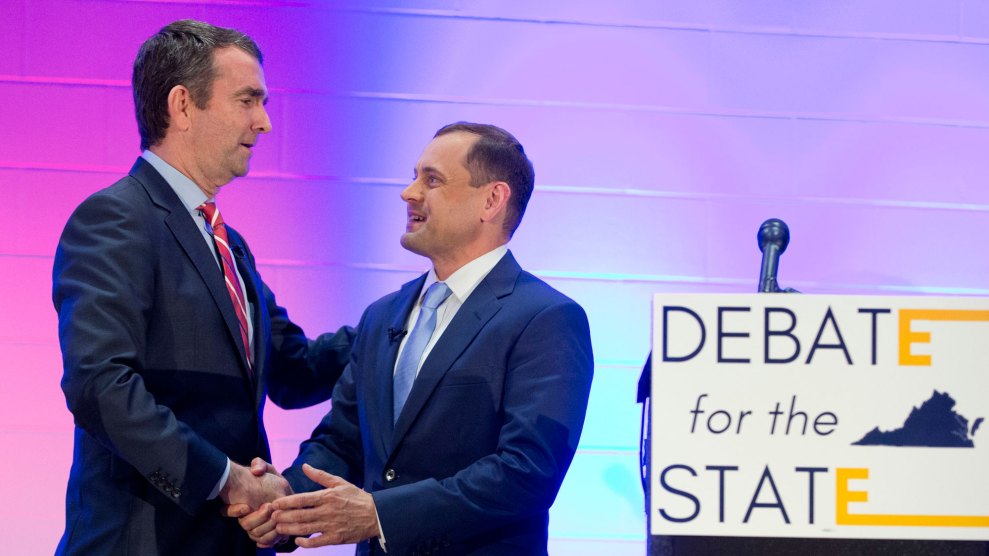 Ralph Northam, left, and Tom Perriello at a debate in MaySteve Helber/AP

Let’s get this out of the way: Contrary to what you may have read on Twitter, neither Hillary Clinton nor Bernie Sanders is seeking the Democratic nomination for governor of Virginia. Tuesday’s primary between Lt. Gov. Ralph Northam and former Rep. Tom Perriello is less a referendum on what happened in last year’s presidential contest than it is the first in a long series of debates that will play out over the next two years.

The clearest fault-line in the race to succeed Democratic Gov. Terry McAuliffe is not between Bernie and Hillary, but rather between Virginia Democratic leaders and national ones. As Northam noted on the campaign trail, he was endorsed by every Democratic member of the state legislature, the governor, the state attorney general, and most of the state’s Democratic congressional delegation. There is an undeniable inertia to incumbency, especially when things are going well, and he is running on a platform that, at least in Virginia—an increasingly blue state where McAuliffe ran and won on gun control—has met with a series of statewide successes.

Perriello, who entered the race in January—long after Northam appeared to have the nomination locked up—is the darling of national Democratic leaders and activist groups. Sanders and his organization, Our Revolution, has endorsed Perriello. So has Jon Lovett, the former Obama speechwriter who co-hosts the popular Pod Save America podcast; Lovett went door-knocking with the ex-congressman earlier this month. Although Obama himself has stayed quiet, 30 of his former staffers signed onto a letter endorsing Perriello, and Perriello is airing ads around the state featuring Obama stumping for him in Charlottesville seven years ago.

Perriello’s wonky economic populism and his opposition to new natural-gas pipelines in the state helped endear him to Berniecrats. But the life-force of his candidacy has been the difficult votes he cast for key Obama agenda items, such as the Affordable Care Act and a doomed cap-and-trade bill that would have restricted greenhouse gas emissions. The Left may look back on Obamacare as a missed opportunity, but on the eve of the 2010 tea party wave, Perriello—a freshman congressman in a conservative district—stuck his neck out in a way that plenty of other Democrats didn’t, and Obama-ites haven’t forgotten it.

From the perspective of progressives, both Northam and Perriello have blemishes on their records that make them imperfect fits for the roles that have been ascribed to them. Northam, ostensibly the party man, voted for George W. Bush twice and said at a debate ahead of his 2011 re-election to the state Senate that health care is a “privilege.” (Northam now calls it a “right.”) Perriello received an “A”-rating from the NRA as a congressman and voted for the anti-abortion “Stupak amendment” to the Affordable Care Act. (He has since renounced the Stupak vote and condemned the NRA.)

Finding deeper meaning in the Virginia Democratic primary is difficult because politics is complicated. The fact that Perriello caught fire after entering a race whose outcome seemed to pre-ordained speaks to the anxieties and unrest among Democrats. The fact that Northam might still hold on tell us something, too—about the strength of national mood swings in places where Democrats are already doing pretty well. This is the first close Democratic primary since 2016, not the last; gubernatorial primaries next year in Florida, Illinois, and California might tell us something different.

Just as revealing as the fact that the Democratic primary is chaotic is the fact that the Republican primary isn’t. Corey Stewart, a Confederate sympathizer from Minnesota by way of California who had been Donald Trump’s state chairman, sought to make a race of it by promising to protect century-old monuments to Civil War generals. But former lobbyist and RNC chairman Ed Gillespie, himself a Trump supporter, has been the presumptive nominee since he entered the race.

Gillespie’s ascendancy in the state party is also the latest step in a decades-long Beltway-ization of Virginia politics. If Gillespie wins in November, he would be the third national party chair to hold the post in the last 10 years. He would be a fitting successor to Terry McAuliffe—two career fundraisers and lobbyists who served concurrently as party chairs during the 2004 election. Perriello, who represented a rural South Side district in Congress before moving to Arlington, doesn’t fit the same bill as Gillespie, but his DC credentials include a stint as president of the Center for American Progress Action Fund, the archetype of Beltway progressivism.

The Democratic party is in the midst of a transformation that will not end on Tuesday or for a long time after. But on the south shore of the Potomac, Republicans seem just fine with their swamp.

Courtesy of our friends at Decision Desk HQ, you can follow the results from Virginia live once the polls close at 7 p.m. ETD.