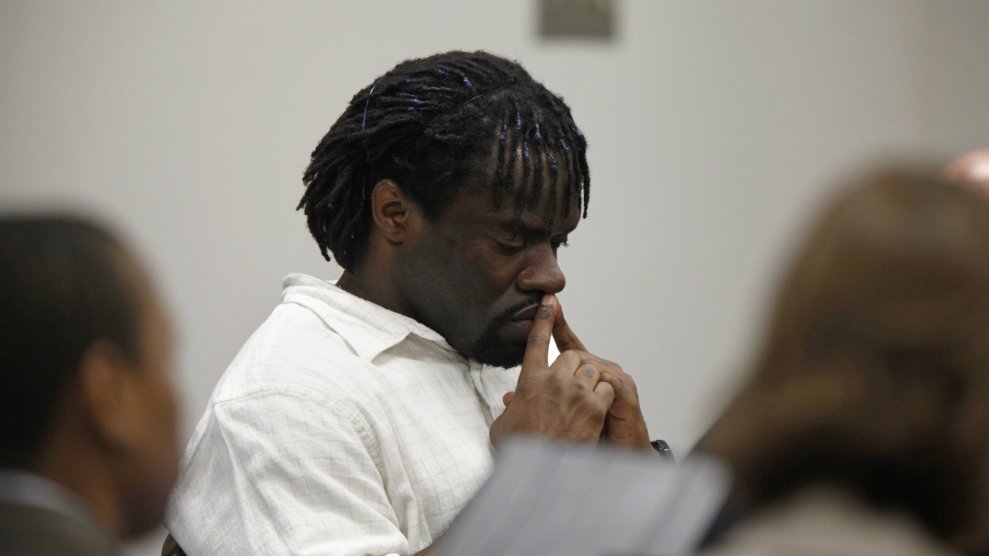 In 1994, Marcus Robinson, who is black, was convicted of murder and sentenced to death for the 1991 killing of Erik Tornblom, a white teenager, in Cumberland County, North Carolina. He spent nearly 20 years on death row, but in 2012 his sentence was changed to life without a chance of parole. He was one of four death row inmates whose sentences were commuted by a judge who found that racial discrimination had played a role in their trials.

The reason their cases were reviewed at all was because of a 2009 North Carolina law known as the Racial Justice Act, which allowed judges to reduce death sentences to life in prison without parole when defendants were able to prove racial bias in their charge, jury selection, or sentence.

“The Racial Justice Act ensures that when North Carolina hands down our state’s harshest punishment to our most heinous criminals,” former Gov. Bev Perdue said when she signed the bill into law, “the decision is based on the facts and the law, not racial prejudice.”

At 21, Robinson was the youngest person sentenced to death in North Carolina. When he was three, he was hospitalized with severe seizures after being physically abused by his father and was diagnosed with permanent brain dysfunction. However, those weren’t the only troubling aspects of his case.

“We continue to believe the Racial Justice Act is an ill-conceived law that has very little to do with race and absolutely nothing to do with justice.”

Racial discrimination in jury selection has been prohibited since it was banned by the Supreme Court in its 1986 Supreme Court decision Batson v. Kentucky, but Robinson’s trial was infected with it. The prosecutor in the case, John Dickson, disproportionately refused eligible black potential jurors. For example, he struck one black potential juror because the man had been once charged with public drunkenness. However, he accepted two “nonblack” people with DWI convictions. Of the eligible members of the pool, he struck half the black people and only 14 percent of the nonblack members. In the end, Robinson was tried by a 12-person jury that included only three people of color—one Native American individual and two black people.

Racial discrimination in jury selection was not uncommon in the North Carolina criminal justice system. A comprehensive Michigan State University study looked at more than 7,400 potential jurors in 173 cases from 1990 to 2010. Researchers found that statewide prosecutors struck 52.6 percent of eligible potential black jurors and only 25.7 percent of all other potential jurors. This bias was reflected on death row. Of the 147 people on North Carolina’s death row, 35 inmates were sentenced by all-white juries; 38 by juries with just one black member.

Under the Racial Justice Act, death row inmates had one year from when the bill became law to file a motion. Nearly all the state’s 145 death row inmates filed claims, but only Robison and three others—Quintel Augustine, Tilmon Golphin, and Christina Walters—obtained hearings. In 2012, Robinson’s was the first. At the Superior Court of Cumberland County, Judge Gregory Weeks ruled that race had played a significant role in the trial and Robinson was resentenced to life without parole. North Carolina appealed the decision to the state’s Supreme Court.

An immediate outcry followed the decision. The North Carolina Conference of District Attorneys issued a statement saying, “Capital cases reflect the most brutal and heinous offenders in our society. Whether the death penalty is an appropriate sentence for murderers should be addressed by our lawmakers in the General Assembly, not masked as claims (of) racism in our courts.”

The ruling attracted lots of publicity from across the country and North Carolina lawmakers were outraged. “There are definitely signs in the legislative record that there were some [lawmakers] that really wanted to see executions move forward,” Cassandra Stubbs, the director of the ACLU Capital Punishment Project who also represents Robinson, says. Legislative staffers circulated talking points for lawmakers with arguments that the RJA turns “district attorneys into racists and convicted murderers into victims,” describing the law as “an end-run around the death penalty and an indefinite moratorium on capital punishment.”

The day Judge Weeks resentenced Robinson, the Senate president pro tempore for the state Legislature, Phillip Berger, expressed concern that Robinson could be eligible for parole. He suggested Robinson—who had just turned 18 when he committed the crime and would not have been considered a juvenile—would be ineligible for life in prison without a chance of parole, citing a US Supreme Court ruling that prohibited juveniles from receiving life sentences without parole. “We cannot allow cold-blooded killers to be released into our community, and I expect the state to appeal this decision,” he said. “Regardless of the outcome, we continue to believe the Racial Justice Act is an ill-conceived law that has very little to do with race and absolutely nothing to do with justice.”

The state Legislature took on the challenge and voted to repeal the Racial Justice Act in 2013. This made it impossible for those on death row to even attempt to have their sentences reviewed for racial bias, but it left the fates of the four who had been moved to life imprisonment unclear. “The state’s district attorneys are nearly unanimous in their bipartisan conclusion that the Racial Justice Act created a judicial loophole to avoid the death penalty and not a path to justice,” Gov. Pat McCrory said in a statement at the time.

Even though the law was still in effect when the four inmates’ sentences were reduced, they weren’t safe from death row just yet. Robinson’s sentenced had been legally reduced, but the legal battle was just beginning.

In 2015, after nearly two years from the initial hearing, the North Carolina Supreme Court ordered the Superior Court to reconsider the reduced sentences for Robinson, Augustine, Golphin, and Walters, saying the judge failed to give the state enough time to prepare for the “complex” proceedings.

This past January, Superior Court Judge Erwin Spainhour ruled that because the RJA had been repealed, the four defendants could no longer use the law to reduce their sentences. “North Carolina vowed to undertake an unprecedented look at the role of racial bias in capital sentencing,” says Stubbs. But now, “the state Legislature explicitly turned from its commitment and repealed the law.”

Robinson is back on death row at Central Prison in the state’s capital of Raleigh. In the petition to the state Supreme Court, Robinson’s lawyers point out that the Double Jeopardy Clause—the law that prevents someone from being tried twice for the same crime—bars North Carolina from trying to reimpose the death penalty because the 2012 RJA hearing acquitted him of capital punishment.

“He’s never been resentenced to death,” Stubbs says. “They have no basis to hold him on death row.”