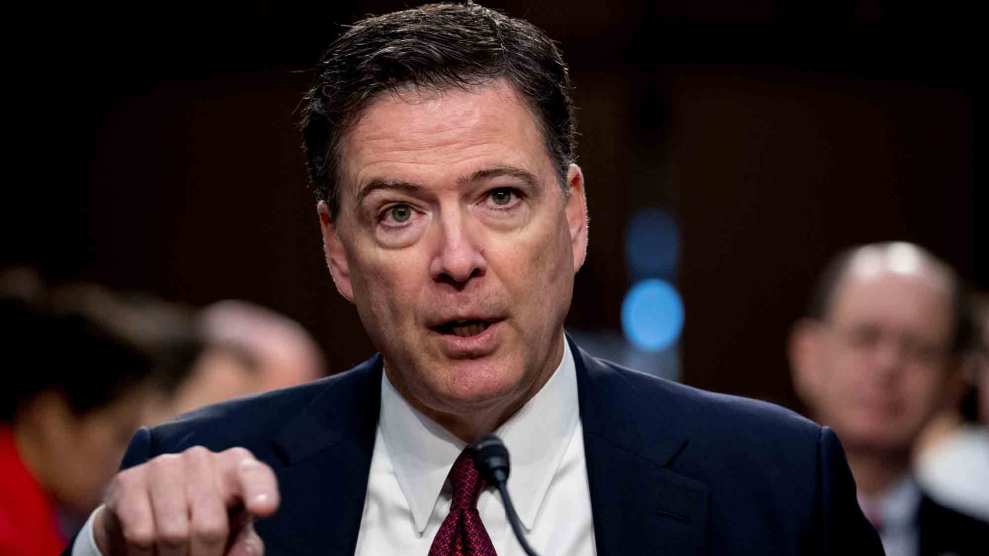 Here is the bombshell: a former FBI director has said publicly and under oath that the current president of the United States cannot be trusted.

This is unprecedented and highly troubling. Though James Comey, whom President Donald Trump fired in May, had the day before disclosed his prepared testimony chronicling his disturbing interactions with Trump, his dramatic and much-anticipated appearance Thursday morning before the Senate intelligence committee reinforced and expanded the damning indictment Comey presented in his statement. He noted that he believed that Trump had privately directed him to drop the investigation of former national security adviser Michael Flynn that was part of the FBI’s ongoing Russia probe. He also testified that he saw Trump’s statements to him about the Russia investigation as an order to quash the probe. And he accused the president and the White House of lying.

In his prepared testimony, Comey recounted in just-the-facts manner a series of private communications with Trump, during which the president asked Comey to pledge him loyalty, to go easy on Flynn, to “lift the cloud” created by the Russia investigation, and to publicly state that Trump was not personally under investigation. Before the intelligence committee, which is mounting its own probe of the Trump-Russia scandal, Comey detailed how these discussions worried him and other senior FBI officials.

Republicans on the committee tried to protect Trump by highlighting how Trump had asked Comey to help Flynn, noting the president had said, “I hope you can see your way clear to letting this go.” Expressing hope, they noted, is not a command. Yet Comey swatted that away, saying he was shocked by the request and interpreted Trump’s statement as an instruction. “I took it as a direction,” Comey testified, adding, “I didn’t obey.” This was solid testimony that the president was trying to block an FBI investigation of a close associate. Whether or not that qualifies as obstruction of justice—Comey told the senators that special counsel Robert Mueller will be reviewing this question—it is a serious charge. Moreover, Comey’s account directly contradicts Trump’s assertion that he did not ask Comey to let Flynn off the hook. Unless Comey is making up this tale, Trump has been caught in a bold lie.

Comey repeatedly indicated that he feared Trump was a dishonest man who had no allegiance to the rule of law or ethical conduct. He essentially said that he believed Trump was trying to enlist him as a loyal member of his crew and undermine his standing as an independent actor. Asked why he wrote memos about his meetings with Trump, Comey was blunt: he was concerned Trump “might lie about the nature of our meetings.” And in a stunning admission, Comey recalled that after Trump suggested in a tweet that he had secret tapes of his conversations with with the then-FBI director, Comey directed a close friend (a Columbia University Law professor) to leak to the New York Times a Comey memo detailing the meeting in which Trump asked him to end the Flynn probe. Comey explained he hoped this leak would lead to the appointment of a special prosecutor.

Ponder that for a moment: a former FBI chief was so worried about the conduct of a president, he took steps designed to create an independently overseen investigation of the president’s associates and political campaign.

Comey also challenged—indirectly but fiercely—Trump’s spin on the Russia scandal. He noted there was absolutely no question about the intelligence community’s assessment that Moscow had intervened in the 2016 election to benefit Trump. “That is about as unfake as you can possibly get,” he commented. A foreign government, he remarked, “tried to shape the way we think, we vote, we act. That is a big deal. And people need to recognize that.” Comey said that not once after taking office did Trump ask him about Russia’s intervention in the election or what could be done to prevent a reoccurrence. (That is a severe dereliction of duty for a commander in chief.) Pointing to Trump’s own statements, Comey testified he believed Trump fired him because of the Russia investigation.

This was a powerful appearance. Republicans looking to protect Trump could not mount much of a defense. None of them criticized Comey. A few asked why he he didn’t stand up to Trump during any one of these improper communications. (Comey explained he was too shocked.) They encouraged Comey to say repeatedly that despite Trump’s attempted interventions, the Russia and Flynn investigations were not impeded. Some focused on Comey’s stated concerns about how former Attorney General Loretta Lynch handled the Hillary Clinton email investigation. Sen. James Lankford (R-Okla.) remarked that if Trump only tried once to get Comey to call off the hounds on Flynn, this was merely a “light touch.” Sen. Tom Cotton (R-Ark.) pressed Comey on whether he believed Trump colluded with Russia, looking for a “no.” Comey replied, ‘That’s a question that would be answered by the investigation.” Several Republicans asked Comey to debunk a New York Times article reporting Trump campaign associates had repeated contacts with Russian intelligence—and he did.

Yet the overarching message of the historic hearing was undeniable: a former FBI director had credibly undermined the integrity of the president. Citing the Russia investigation, Comey compared Trump to Henry II, who was said to have declared of Thomas Beckett, “Who will rid me of this meddlesome priest?” He accused the president and the White House of outright lying when they claimed the FBI was in chaos to justify his firing.

At the start of the hearing, Sen. Richard Burr (R-NC), the chairman of the committee, said that it would be important for the American public to also “hear the president’s description of events.” Some form of that is now imperative. With Comey’s public appearance, the committee, the House intelligence committee, and special counsel Robert Mueller each have testimony casting Trump as a liar and a Nixonesque scoundrel who attempted to abuse his power. While they each investigate Moscow’s covert political warfare against the United States and interactions between Trump associates and Russia, they also have the task of probing Trump’s efforts to rig the FBI investigation and his firing of the official who would not play ball.

As vital as the Russia investigations remain, Comey’s testimony addresses a more fundamental question: is the US government in the hands of a deceitful and devious man?