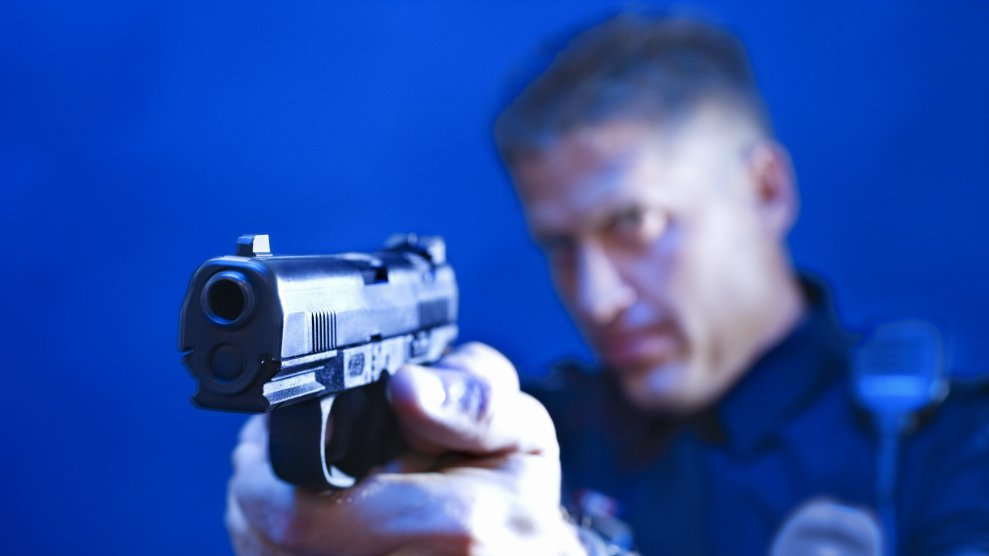 Police reform advocates have demanded in recent years that officers face consequences for using excessive force, especially in shootings. But a new lawsuit alleges that a former Weirton, West Virginia, police officer was disciplined for doing the opposite. During an incident last May, Officer Stephen Mader decided not to shoot an armed suicidal man. Police brass determined he showed poor judgment during the encounter. Soon after, Mader was fired from the town’s police force. Now he is suing the city for wrongful termination.

The lawsuit, filed May 10 against the city of Weirton by Mader’s attorney along with the ACLU of West Virginia, accuses the department of firing Mader to buttress its defense of another officer who did shoot the man. In an emailed statement to Mother Jones, Weirton’s mayor’s office declined to comment on the suit, adding that the “the city hasn’t received a copy of the lawsuit or been made aware of any allegations.”

Mader says he determined that Williams was attempting to commit suicide-by-cop and, believing that he was not a threat, decided not to shoot him.

According to the lawsuit, on the evening of May 6, 2016, Mader responded to a 911 call from a woman who reported that her ex-boyfriend was at her home and had threatened to kill himself. Mader—a veteran of the Marines—was a rookie officer at the time. When he arrived at the scene, he encountered Ronald Williams, a 21-year-old African American man, standing outside the home with his hands behind his back. After initially refusing to show his hands, Williams brought them to his side and revealed that he was holding a handgun. Mader demanded that Williams drop it, but he refused and told Mader to shoot him.

During the encounter, Williams was visibly despondent but not aggressive, the lawsuit says. Mader says he determined that Williams was attempting to commit suicide-by-cop and—believing that he was not a threat—decided not to shoot him. As Mader tried to talk him down, two other officers arrived on the scene. Williams then raised his gun, and one of the officers shot him in the head, killing him. The officers later determined that Williams’ gun was unloaded.

Mader was fired the next month following an investigation into the incident. Weirton’s city manager told local media after Mader’s dismissal that he was fired because of two other incidents that took place earlier in the year. In the termination letter, the Weirton police chief wrote that Mader displayed “difficulties in critical incident reasoning” and had failed “to meet probationary standards of an officer.” The letter does not refer to Mader’s encounter with Williams or other incidents. But in an accompanying memo, a police captain accused Mader of “negligence” during the May 6 incident because he “failed to engage the suspect” and eliminate a threat, forcing another officer to shoot Williams in order to protect his ex-girlfriend, her child, and other officers on the scene. A prosecutor also determined that the officer who shot Williams—and who remains on the force—was justified in doing so.

According to his lawsuit, it was Mader’s responsibility to decide for himself what kind of force to use based on his own assessment of whether Williams posed an imminent threat. Department protocol—and the Fourth Amendment of the Constitution—barred him from using deadly force in any other circumstance. The suit also argues that the department’s decision to fire him encourages other Weirton Police Department officers to use force in incidents where it may not be necessary by sending the message that they could lose their jobs if they don’t. “What I think it shows—and this is a problem I think we have throughout the country—is that because you can use deadly force, you should use deadly force,” Mader’s attorney Tim O’Brien told me. “And what this case is about is that an officer should be entitled to exercise that discretion based on facts known to that officer.” The same can be said of officers who choose to shoot, O’Brien noted, but the same Fourth Amendment standard applies.

General de-escalation training for police and more precise training on dealing with individuals in a mental health crisis have been increasingly adopted by police departments around the country in recent years, but the training is still not widespread. Just 16 states mandate de-escalation training for police officers, according to a recent investigation by AMP Reports. West Virginia is not one of them. Among those states that do require it, some require as little as one hour of training per year.

Mader says he received some de-escalation training in the Weirton police academy, but he mostly drew on his military training during his encounter with Williams. There is little research on whether military veterans—which account for nearly 20 percent of of all police officers nationwide, according to a recent Marshall Project investigation—are more or less likely to use force. A recent Pew Research survey found that cops who were veterans were slightly more likely to say they had used force than their non-veteran peers.

Mader told me he believes Williams might still be alive if he had had more time to talk to him before other officers arrived on the scene. O’Brien agreed, and said that while the case is about a single officer, it has implications for policing nationwide “and the context in which we have arrived in this society where it has become almost second nature to accept the fact that a first option is to shoot and kill a citizen. It’s become much more the norm than perhaps it should be and that’s what we need to evaluate.”

You can read the full lawsuit here.