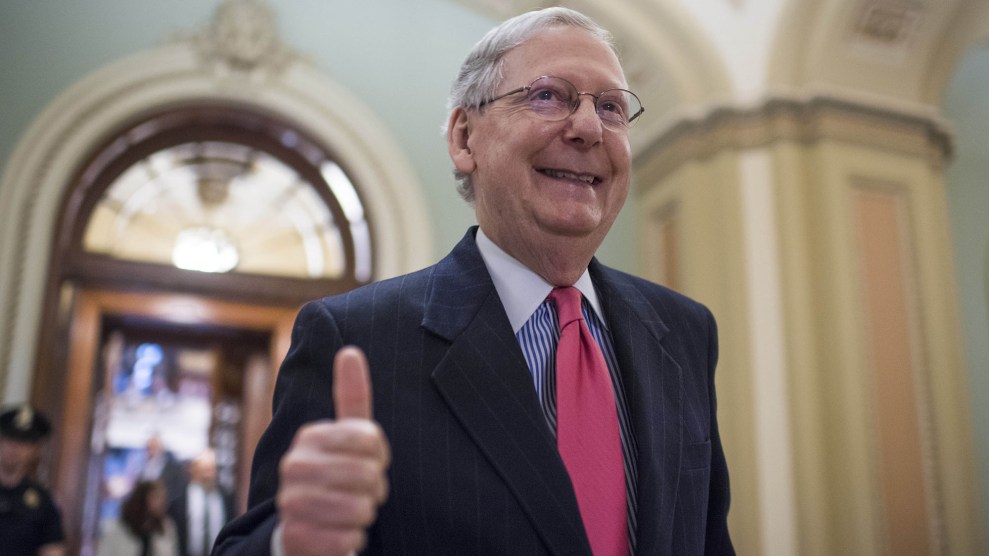 Now that Republicans in the House of Representatives have passed a bill to repeal Obamacare, the work is shifting to the Senate. Senate Republicans will need to cobble together a deal without losing more than two of their own members (Vice President Mike Pence could cast the tie-breaking vote if it’s tied 50-50). Because the legislation is what’s known as a reconciliation bill, it can’t be filibustered.

The House bill is unlikely to pass the Senate without significant changes, as a number of GOP senators have voiced displeasure with various aspects of it. Senate Republicans have formed a working group made of up various ideological factions—ranging from Republicans in swing states wary of Medicaid cuts to hardcore conservatives, such as Ted Cruz—to try to find a compromise.

On Friday, Bloomberg published the list of senators who are part of that working group so far, and one group is notably absent: women. All 13 of the GOP senators reportedly involved in crafting the new bill are men; none of the Senate’s five Republican women are members of the group. (Senate Majority Leader Mitch McConnell’s (Ky.) press office didn’t immediately respond to a request to confirm or comment on the membership of the working group.)

The House plan to repeal Obamacare would cut all federal funding to Planned Parenthood and would allow states to end Obamacare’s prohibition on discrimination against patients with preexisting conditions—allowing insurance companies to charge women more strictly because they are women. And yet apparently, none of the lawmakers involved in crafting the Senate’s initial legislation will be women.

This is particularly surprising since several female Republican senators have voiced skepticism about the House bill, and at least some of them will need to be brought onboard in order for the Senate to pass a health care bill. Sen. Shelley Moore Capito (R-W.Va.) cosigned a letter earlier this year objecting to the House’s proposal to end Medicaid expansion, which has helped lower the uninsured rate for adults in her home state from 22 percent in 2011 to 8.7 percent in 2015. Republican Sens. Susan Collins (Maine) and Lisa Murkowski (Alaska) have both objected to the bill’s provision defunding Planned Parenthood. Collins’ absence from the working group is particularly surprising, since the Maine senator has taken a leading role in crafting one of the few fully fleshed-out alternative proposals to the House’s bill.

Leaving women out of key spots is becoming a trend when it comes to health care decisions during the Trump administration. When Trump invited House members to the Rose Garden after Thursday’s vote, it was a sea of mostly men standing behind him. When the White House released images of Trump meeting with the conservative Freedom Caucus in March, Kellyanne Conway was the only woman in sight.