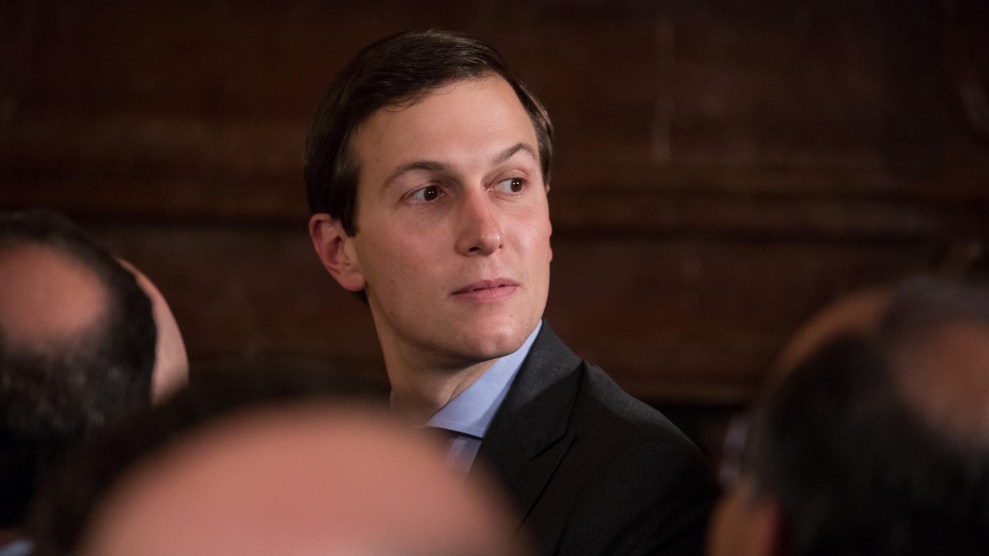 Jared Kusher, the husband of President Donald Trump’s daughter Ivanka and one of the president’s top advisers in the White House, is “now a focus in the [FBI’s] Russia investigation,” according to a Washington Post report published Thursday evening. And NBC News reported, “Investigators believe Kushner has significant information relevant to their inquiry, officials said. That does not mean they suspect him of a crime or intend to charge him.”

Kushner’s December meetings with Russian Ambassador Sergey Kislyak and the head of a Russian bank from Moscow are being looked at by investigators probing Russian meddling in the 2016 US presidential election and examining possible ties between Trump associates and Russia, according to the Post. Former national security adviser Michael Flynn and former Trump campaign chairman Paul Manafort have also been under scrutiny for their contacts with Russians or pro-Russian Ukrainian politicians.

In early December, Kushner met in New York with Russian ambassador Sergey Kislyak, and he later sent a deputy to meet with Kislyak again. Flynn was also present at the early December meeting, and later that month, Flynn held a call with Kislyak to discuss U.S.-imposed sanctions against Russia. Flynn initially mischaracterized the conversation even to the vice president — which ultimately prompted his ouster from the White House.

Kushner also met in December with Sergey Gorkov, the head of Vnesheconombank, which has been the subject of U.S. sanctions following Russia’s annexation of Crimea and its support of separatists in eastern Ukraine.

In addition to the December meetings, a former senior intelligence official said FBI agents had been looking closely at earlier exchanges between Trump associates and the Russians dating back to the spring of 2016, including one at the Mayflower Hotel in Washington. Kushner and Kislyak — along with close Trump adviser and current Attorney General Jeff Sessions — were present at an April 2016 event at the Mayflower where then-candidate Trump promised in a speech to seek better relations with Russia. It is unclear whether Kushner and Kislyak interacted there.

As reported by the New York Times in April, Kushner failed to disclose several meetings with Russian officials, an omission Kushner’s lawyers have characterized as a mistake. Jamie Gorelick, one of Kushner’s attorneys and a former deputy attorney general during the Clinton administration, told the Post Thursday that Kushner volunteered to share information about his contacts with the Russians with investigators.