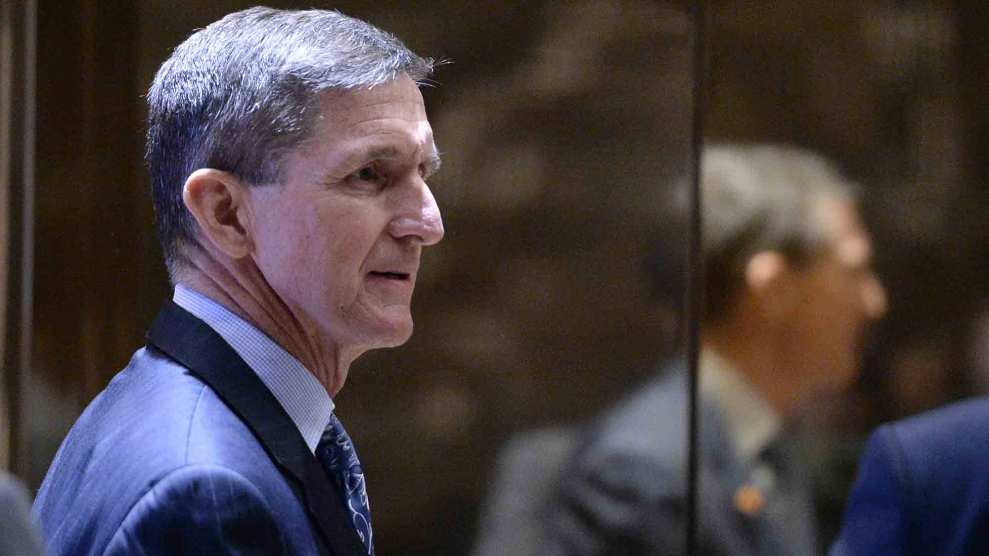 It is hard to keep track of all the Michael Flynn scandals. The former national security adviser for President Donald Trump—who lasted only 22 days in the job—is at the center of various investigations. He has drawn scrutiny for his contacts with the Russian government (and for lying about those contacts), for his pocketing of $45,000 from Kremlin-backed RT (and his failure to disclose the payment), for his lobbying for Turkish interests (and his failure to disclose that as well), and for attending a meeting with Turkish officials during which a plan reportedly was discussed for abducting a US-based foe of that country’s president. But one Flynn mystery has received little attention: What was the original source of the $530,000 he was paid last summer and fall—when he was Trump’s top national security aide—to be an agent for Turkish interests?

In March, Flynn, who weeks earlier had been fired from the White House job for lying about his contacts with Russian Ambassador Sergey Kislyak, retroactively filed with the Justice Department as a foreign agent. (It’s illegal to lobby for foreign interests and not register with the Justice Department, and Flynn is reportedly under investigation for not registering at the time he did this work.) Flynn’s retroactive disclosure noted that he had been hired in August 2016 by Inovo BV, a Dutch consulting company run by Ekim Alptekin, the chairman of the Turkey-US Business Council.

Much is hazy about Michael Flynn’s work for Ekim Alptekin, including, most notably, the source of the funding for the project.

The paperwork Flynn filed with the government is confusing. Some of the records note that his company, the Flynn Intel Group, was hired to compile opposition research on Fethullah Gulen, a Muslim cleric living in Pennsylvania whom the Turkish government claims helped orchestrate an unsuccessful coup against President Recep Tayyip Erdogan last summer, and to prepare material on Gulen—presumably derogatory material—that could be publicly disseminated. But an attachment to the filing, citing an American law firm representing Alptekin, says that “Inovo represented a private sector company in Israel that sought to export natural gas to Turkey, and it was for support of its consulting work for this client that Inovo engaged Flynn Intel Group, specifically to understand the tumultuous political climate at the time between the United States and Turkey so that Inovo could advise its client regarding its business opportunities and investment in Turkey.” In March, Alptekin told one reporter that he had hired Flynn “principally to produce geopolitical analysis on Turkey and the region” for a “regional energy company that is considering an investment in Turkey.”

It’s unclear why there are conflicting accounts about Flynn’s work for Inovo and Alptekin. And though Alptekin has asserted that his firm had no official or financial connections to the Turkish government, Flynn’s retroactive registration—his company shut down in November—stated, “Flynn Intel Group’s work for Inovo could be construed to have principally benefitted the Republic of Turkey.” It was through his contract with Inovo that Flynn ended up in a September 19 meeting set up by Alptekin at the Essex House hotel in New York City with Turkish government officials, where reportedly the participants considered kidnapping Gulen. (A Flynn spokesman insisted Flynn had not discussed any illegal actions, and Alptekin has denied there was any talk of abducting Gulen at this gathering.)

Much is hazy about Flynn’s work for Alptekin, including, most notably, the source of the funding for the project. According to Flynn’s disclosure filing, Alptekin’s Inovo made three payments to him from September 9 to November 14 totaling $530,000. None of the money came from Turkey, according to Alptekin’s American attorneys. In an interview with a Dutch newspaper in April, Alptekin said the funds for the Flynn project came from a loan from his wife and payments from Ratio Oil Exploration, an Israeli natural gas company.

Here’s where the story gets curious. An Israeli news station in March contacted Ratio Oil Exploration, and the firm said it had no relationship with Alptekin.

1/ Flynn and Turkey: Israeli gas companies tell us in @news10 that they had no connection whatsoever with @ekimalptekin , never employed him

A day after disclosing that news, the Israeli station reported that Alptekin had told it, “I have never stated, confirmed, or denied that I acted for Ratio Oil.”

1/Turkish businessman @ekimalptekin who hired General Flynn tells me: ‘I have never stated, confirmed or denied that I acted for Ratio Oil..

Yet weeks later, Alptekin was telling the Dutch newspaper that some of the money for Flynn had indeed come from Ratio Oil Exploration. Was Ratio Oil part of the Flynn deal? It would seem not, given that the company denied any connection to Alptekin. For his part, Alptekin had initially been dodgy about its possible involvement before stating that Ratio Oil had helped to finance the Flynn project. (Ratio Oil did not respond to a request for comment.)

As for his wife, Nigar Alptekin, she is an Azerbaijani fashion model who once was in a Turkish pop group with two other models that was called Adrenalin. Neither Nigar Alptekin (also known as Nigar Talibova or Nigar Talibzade) nor the music group have a prominent online presence. A music video from the group posted on YouTube in 2012 had only been viewed 4,387 times as of Thursday. Nigar Alptekin’s Twitter feed has 155 followers.

Ekim Alptekin this week was in Washington for the 36th Annual Conference on US-Turkey Relations. When a reporter for Mother Jones, looking to ask about the source of the money and his wife’s role, approached Alptekin, he declined to be interviewed. Alptekin did not respond to multiple email requests for comment. And a lawyer for Flynn also did not respond to a request for comment.

It’s possible that Alptekin used money from a fashion model and an Israeli energy company to pay for Flynn’s secret lobbying for Turkish interests. But confirming the source of these funds could well be on the to-do list of FBI investigators working the Flynn case, a list that seems to be rather long.