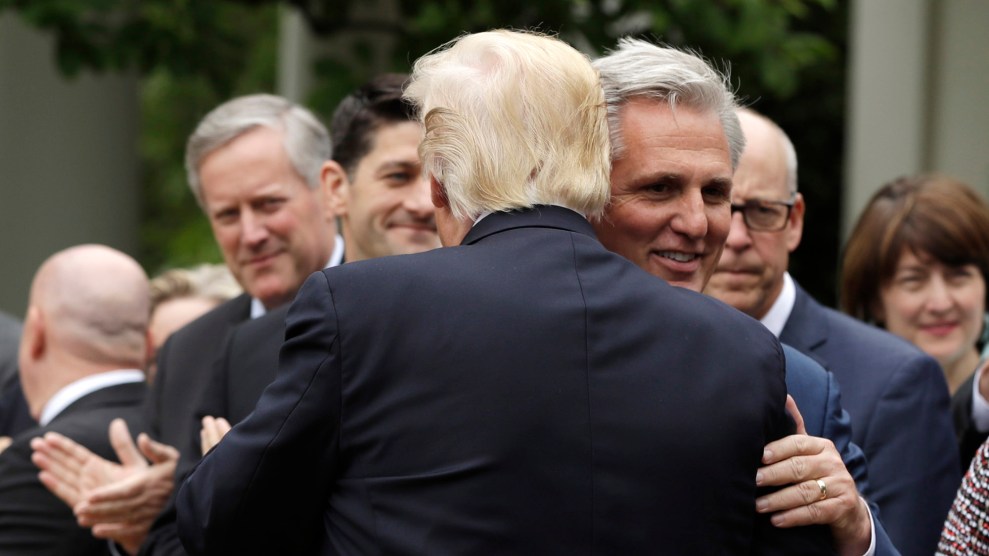 Another night, another bombshell report about President Donald Trump and Russia.

The Washington Post revealed Wednesday evening that in June 2016, House Majority Leader Kevin McCarthy (R-Calif.) was secretly recorded telling other top Republicans that he believed Russian President Vladimir Putin “pays” Trump. Speaker of the House Paul Ryan (R-Wisc.), who was in the room at the time, apparently ended the exchange moments later by telling those present not to leak what was said.

“There’s two people I think Putin pays: [Rep. Dana] Rohrabacher [R-Calif.] and Trump,” McCarthy said, according to the Post, which reports that it obtained and verified a recording. (A spokeman for Rohrabacher denied the allegation; Trump has also denied any coordination with Russia.)

Spokesmen for Ryan and McCarthy told the Post that the exchange was meant as a joke, and there’s no evidence in the story that McCarthy was aware of any evidence to support the claim that Trump or Rohrabacher was on the Russian payroll. Regardless, the conversation provides some insight into what GOP congressional leaders apparently thought about candidate Trump, who by then had essentially secured the Republican presidential nomination.

The Post published this story just as news was breaking that the Department of Justice had appointed a special counsel to investigate ties between Trump’s presidential campaign and Russia.

Prior to the discussion of Trump, according to the Post, Ryan and McCarthy had met separately with the Ukrainian prime minister, with whom they had discussed Russian interference in Eastern Europe. Here’s how the Post recounted the recorded conversation, which apparently took place the day after news broke that the Democratic National Committee had been hacked:

“I’ll guarantee you that’s what it is…The Russians hacked the DNC and got the opp [opposition] research that they had on Trump,” McCarthy said with a laugh.

Ryan asked who the Russians “delivered” the opposition research to.

“This is an off the record,” Ryan said.

Some lawmakers laughed at that.

“No leaks, alright?,” Ryan said, adding: “This is how we know we’re a real family here.”

The Post notes that it’s difficult to tell whether the remarks were “meant to be taken literally.” When initially asked about the exchange, spokesmen for Ryan and McCarthy denied that the statements had been made. After being told by the Post that there was a recording of the conversation, the spokesmen said that it was an “attempt at humor.”

After being told that The Post would cite a recording of the exchange, Buck, speaking for the GOP House leadership, said: “This entire year-old exchange was clearly an attempt at humor. No one believed the majority leader was seriously asserting that Donald Trump or any of our members were being paid by the Russians. What’s more, the speaker and leadership team have repeatedly spoken out against Russia’s interference in our election, and the House continues to investigate that activity.”

“This was a failed attempt at humor,” Sparks said.

Another intriguing aspect of this story is involvement of Evan McMullin, a former CIA officer and high-ranking GOP Hill staffer who ultimately entered the 2016 presidential race as an independent candidate with backing from the conservative “Never Trump” movement:

Evan McMullin, who in his role as policy director to the House Republican Conference participated in the June 15 conversation, said: “It’s true that Majority Leader McCarthy said that he thought candidate Trump was on the Kremlin’s payroll. Speaker Ryan was concerned about that leaking.”