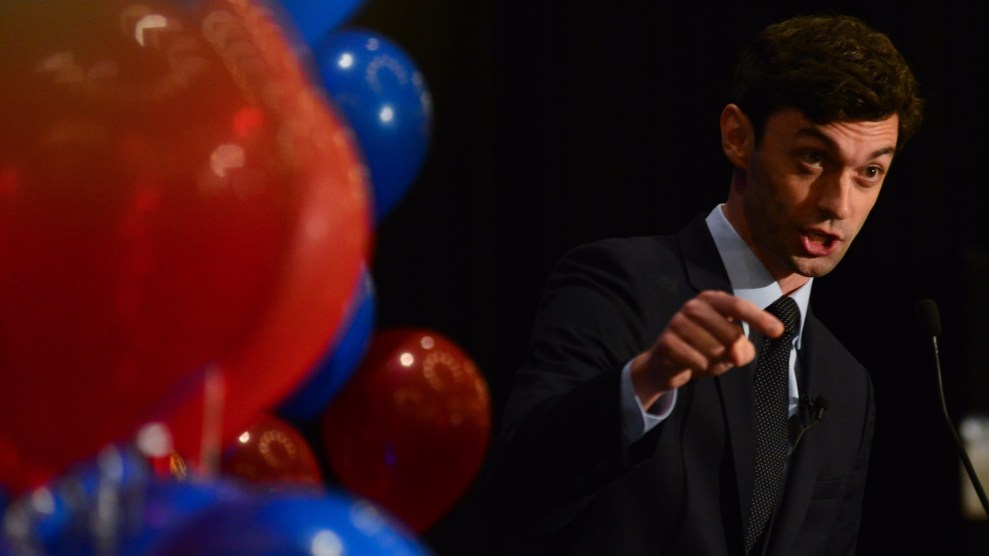 On April 18, Democrat Jon Ossoff came within a hair of winning the congressional seat for Georgia’s 6th District, a strong showing in suburban Atlanta district that has long been considered safe territory for Republicans. He got the most votes as Republicans split their votes among several GOP candidates but fell short of a majority by 3,700 ballots, setting up a runoff with the second-place finisher on June 20. Running against a single Republican, Ossoff must now do what he couldn’t in the first round: cobble together a majority in a historically conservative district. To accomplish that, he’ll likely need to find new voters and turn them out to the polls.

So when federal district court judge Timothy Batten extended the voter registration deadline from March 20 to May 21, he breathed new life into Ossoff’s campaign. Outside groups have rushed into the district to find eligible but unregistered voters—most of them young people and minorities—who are more likely to vote for Ossoff than his Republican opponent, former Georgia Secretary of State Karen Handel.

“It was a game-changer,” says Tharon Johnson, a Democratic strategist based in Atlanta. “The extension of the deadline presents a tremendous opportunity for the Ossoff campaign to expand the electorate and bring a lot of new registered voters to the polls.”

Ossoff’s campaign for the vacant seat previously held by Health and Human Services Secretary Tom Price has captured national attention. Money has poured in from progressives galvanized by their opposition to President Donald Trump and the Republicans in Congress and from GOP-aligned outside groups that have funded a volley of attack ads against Ossoff. It’s already the most expensive House race in history.

The unpopularity of the president in the district has created an opportunity for Ossoff. Stumping for Handel in the district earlier this week, House Speaker Paul Ryan never mentioned the president’s name. Democrats hope that Trump’s low approval will help Ossoff peel off some Republicans and GOP-leaning independents, and his campaign is particularly targeting women. Polls show a dead heat in the race.

But Handel has been the favorite, given the current makeup of the electorate, which remains mostly white, conservative, and accustomed to supporting Republicans. For Ossoff to pull of a win, Johnson says, he’ll need “impressive turnout among new voters.”

For Ossoff to pull of a win, he’ll need “impressive turnout among new voters.”

One of the groups that quickly ramped up their efforts in the district was the New Georgia Project, which was launched by state House Minority Leader Stacey Abrams in 2013 to enroll minorities under the Affordable Care Act. It soon became apparent that many people of color in Georgia were not registered to vote. “We dug into the numbers,” says Nse Ufot, the executive director of the New Georgia Project, and it turned out there were more than 800,000 eligible but unregistered people of color in Georgia. Since 2014, she says, the group has registered nearly 210,000 minority voters in the state.

By overlaying voter registration information from the secretary of state’s office with the latest census data, the group concluded that there are nearly 27,000 unregistered African Americans in the 6th Congressional District. Voter registration rates in the 6th District—a historically white, wealthy, and educated suburb—are the highest in the state. But like the rest of Georgia, it’s becoming more ethnically and economically diverse. To reach these new residents, Ufot says, staff and volunteers are knocking on 1,200 to 1,400 doors a day and setting up voter registration booths at malls and grocery stores on the weekends. Several other groups are actively registering voters, as is the Ossoff campaign itself, which says it is registering about 100 people per day.

As organizers and the campaign are aware, registering new voters is the easy part. Making sure they get to the polls is harder. “It’s a combination of knocking on doors and helping people get voter IDs, and identifying people who need help getting rides to the polls,” says Ufot.

Ufot fears there could be one additional wrinkle: whether the three counties that make up the 6th District will be able to process all the new voter registrations. Ufot says her group is keeping an eye on the counties to ensure that those new voters are added to the rolls in time to vote. After the court’s decision, the counties had a backlog of tens of thousands of registrations to process, in addition to new applications coming in. Cobb County is reportedly receiving about 600 new registratrions a day.

In the legal battle over the registration deadline, Republican Secretary of State Brian Kemp argued that the extension would force election officials to scramble to process the backlog of registrations and new applications. “Cobb County will be required to hire temporary workers to quickly process a significant backlog of voter registration applications,” he warned in a legal brief. Ufot worries that efforts to bring new voters to the polls could be thwarted if the counties fail to process new registrations, not just in this election but in future ones. “For the populations that we focus on who are so difficult to reach and to motivate,” she says, “[if] they show up and they are embarrassed by a poll worker who tells them in front of all their neighbors that they are not on the rolls, it’s going to be so hard to get them back.”