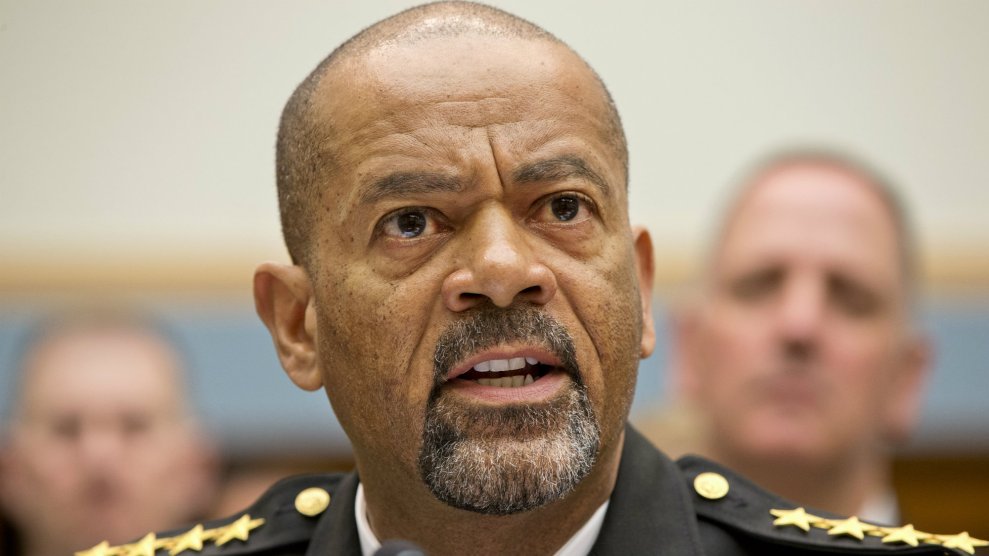 A longtime Republican Party insider and former Senate staffer for now-Attorney General Jeff Sessions has sent out the latest in a series of crude immigrant-bashing fundraising emails in an effort to get Milwaukee County’s controversial sheriff to run for Senate in Wisconsin.

The sheriff, David Clarke, has not signed on to the draft campaign. But Jack Daly, who used to work for several Republicans on the Senate Judiciary Committee, including Sessions, has embarked on the fundraising effort with an advisory group made up of conservative pundits and reality TV stars. Last month, he sent an email blast full of racial invective in an effort to get Clarke to run. The latest email, sent on May 6, portrays undocumented immigrants as drug dealers and rapists—similar charges to those made by Donald Trump during the 2016 presidential campaign.

The email comes on the heels of a mass protest in Milwaukee against Clarke, who wants his department to join the Department of Homeland Security’s 287(g) program, which allows local police departments to carry out the duties of federal immigration officials, such as asking people about their immigration status.

In February, Milwaukee County declared itself a sanctuary jurisdiction, meaning that local law enforcement would not cooperate with the federal government’s efforts to enforce immigration law. Daly, who lives in North Carolina, is not pleased with that move and supports Clarke’s push to join the 287(g) program. In the email, he writes that the sanctuary policy has allowed undocumented immigrants to sow chaos, and Clarke should have the ability to deport undocumented immigrants who come through his jail.

Remember: the hard Left nimrods running Milwaukee’s government have declared Milwaukee a “Sanctuary City” and the schools “Sanctuary Schools” — safe havens where illegals who have been convicted of murder, gun running, dope dealing, rape, and robbery since coming to American unlawfully can hide for the rest of their natural lives, or until they themselves get murdered in another drug deal gone bad.

Daly calls the protest against Clarke a “revolting display of anarchy” in his email. He describes the protesters as “tens of thousands of assorted criminals, illegal aliens, deportables, and miscellaneous Mexican flag-waving types,” as well as “confused and marginalized American university professors, pot heads, and other miscreants.”

Daly claims that many protesters were bused in but that “Milwaukee seems to be full of godless liberals whose main fetish is to harbor these criminal illegals, and help them escape from justice.” Daly also says taxpayers are footing the bill for food, shelter, and medical care for undocumented immigrants in the Milwaukee County Jail.

You paid for their food and their shelter and their medical care while they were in the jail, and for welfare for their dependents and free public education for their kids. And when you were their victims, you paid with your property or your lives.

Clarke’s Milwaukee County jail is far from paradise. Four people died there in 2016, including Terrill Thomas, a 38-year-old mentally ill man who died of dehydration after jail staffers turned off his water for a week as punishment for flooding his previous cell. Earlier this month, jurors recommended criminal charges for the guards involved in Thomas’ death. The investigation did not target Clarke himself, but state lawmakers have called for his resignation over his “gross mismanagement” of the jail.

Daly doesn’t mention any of the jail deaths in the fundraising email. Instead, he attacks Sen. Tammy Baldwin, Clarke’s Democratic opponent if he decides to run. “With liberal extremist Tammy Baldwin raising millions from the open borders lobby, LGBTQ radicals, and Black Lives Matter terrorists,” he writes, “I assure you that every penny counts.”