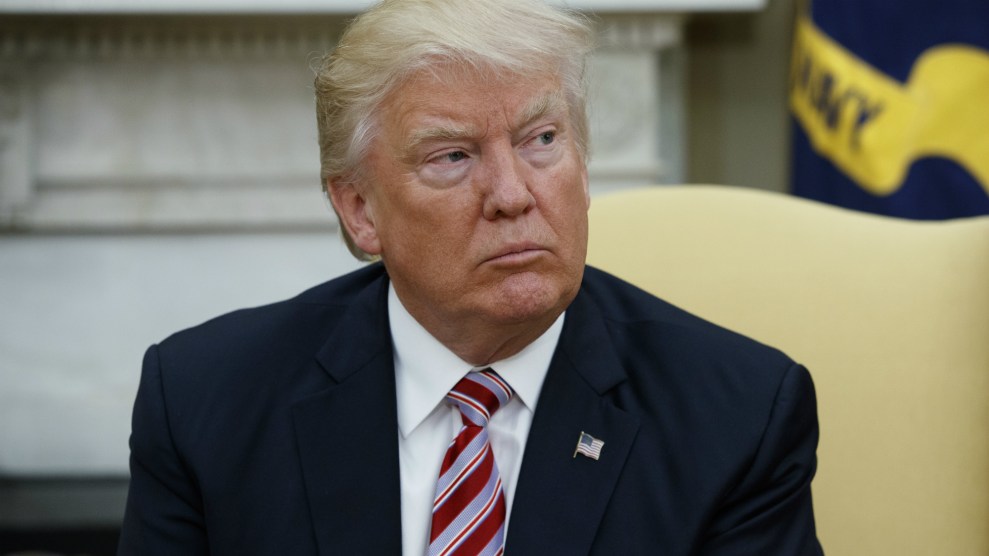 On Friday morning, Donald Trump tweeted, “James Comey better hope that there are no ‘tapes’ of our conversations before he starts leaking to the press.” Not only was this a loosely veiled threat directed at the former FBI director, whom Trump unceremoniously fired on Tuesday, but it also suggested that Trump possessed recordings of their conversations—perhaps even a tape of their January 27 dinner, where the president claims Comey told him he was not under investigation as part of the bureau’s probe of the Trump campaign’s Russia ties.

During a press briefing on Friday afternoon, White House press secretary Sean Spicer declined to answer questions about whether Trump had a secret White House recording system. The good news for historians is that if such tapes do exist, the Trump administration is required by law to preserve these presidential records and turn them over to the National Archives and Records Administration.

A spokesman for NARA forwarded requests for comment on the preservation of Trump’s tapes, if they exist, to the White House, which did not respond to a request for comment from Mother Jones. But Lisa Rosenberg, executive director of Open the Government, a coalition of good-government and watchdog groups, says the the rules are clear: Under the Presidential Records Act, recordings between the president and a senior government official that occur in the White House are not private recordings; they are presidential records that will eventually be released to the public. (An administration can delay the public release of materials for up to 12 years after the president leaves office.)

“We’re not just talking about who he’s having dinner with, we’re talking about information that impacts decision-making that impacts public policy, and in this case it might impact national security and integrity of the elections,” she says. “Even though we might not know what will be said for 12 years, we can still learn from that. We’re still learning from past administrations about any number of issues that continue to resonate to this day. We need to be able to learn from our mistakes, and our successes, so it’s in the public interest. That’s why the Presidential Records Act exists.”

Unfortunately, Rosenberg says, there is no real mechanism to ensure the White House is preserving the tapes as records for future release. She notes that the Presidential Records Act doesn’t have an enforcement mechanism, but there are other legal reasons the records might have to be preserved.

For example, they could be subpoenaed by congressional or FBI investigators probing the Russia scandal or other matters. (President Richard Nixon, who famously recorded his Oval Office meetings and calls, refused to respond to a subpoena for secret recordings of his Oval Office meetings—a refusal that eventually led to one of the articles of impeachment that were drawn up against him.) On Friday, Reps. John Conyers and Elijah Cummings, the ranking Democrats on the House Judiciary and Oversight committees, respectively, sent the White House a letter demanding it turn over any tapes relating to Comey.

Norm Eisen, a former ethics lawyer for the Barack Obama administration, says the existence of recordings means they can be targeted by Congress and that White House officials should be aware of the need to save any that have been made.

“Given the current circumstances, the destruction of such tapes would raise serious obstruction of justice issues,” Eisen says.