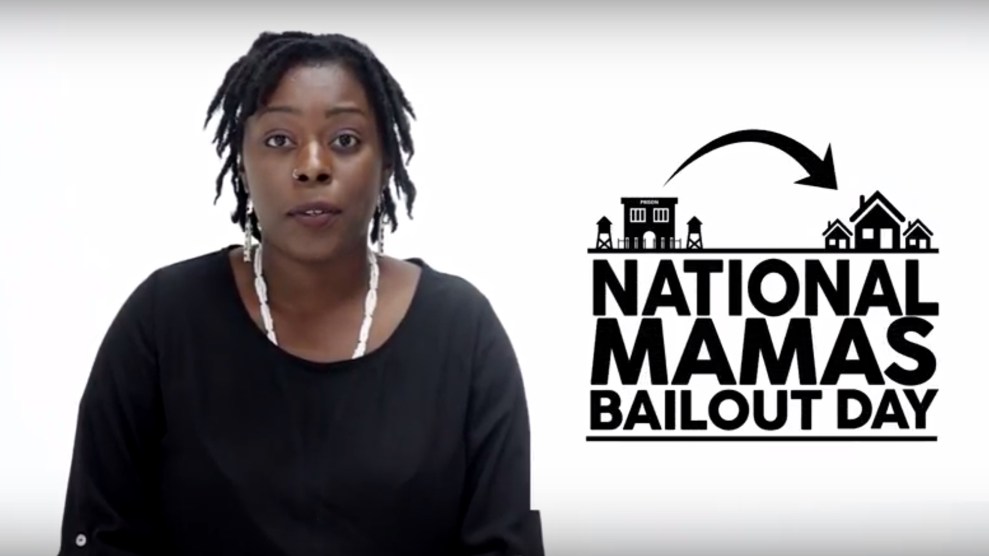 Black Lives Matter has a big gift for some moms this Mother’s Day—their freedom. Groups affiliated with the police and criminal justice reform movement have been bailing black women out of jail ahead of the holiday on Sunday. The nationwide effort, dubbed National Black Mamas Bail Out Day, seeks to reunite the women with their families and raise awareness of the disparate impact of incarceration and the bail system on black women.

So far, more than 50 women around the country have been bailed out by the Mother’s Day effort. Organizing groups in Atlanta, Baltimore, Chicago, New York City, Oakland, and 13 other cities, have been raising money through an online fundraising campaign. So far, they have brought in nearly $500,000 for the campaign, with $25,000 set aside for use in each city. The average bail paid off has varied widely; organizers in Atlanta bailed out 19 women with their pot of money, whereas 4 women have been bailed out in Oakland.

Activists have also raised money individually as well. Members of the Atlanta chapter of Southerners on New Ground (SONG), an LGBT-focused racial justice group, canvassed neighborhoods and collected small donations in a hat, according to Mary Hooks, an organizer with the chapter who came up with the idea for the nationwide initiative. “Black people have a tradition of using our collective resources to buy each other’s freedom,” she says, referring to the slavery-era practice of free black people saving money to purchase the freedom of their enslaved family members and friends. “We have an opportunity to do that when we understand how the cash bail system works. The sooner we can get folks out, the ability for them to mitigate their cases increases and the less collateral damage they are likely to incur.”

The organizers have drawn on their existing relationships with other criminal justice organizations to identify women to bail out of jail. In Oakland, the public defender’s office sent organizers names of women in jail, says Gina Clayton, an organizer with Essie Justice Group. Essie Justice organizers also sat in on arraignment hearings to identify women who would need to be bailed out. One of the people bailed out in Oakland was a mother of two who was jailed on a $10,000 bail about a week earlier, Clayton says. When organizers visited the woman to tell her they were paying her bail, she cried. Organizers with the Oakland office of the Black Alliance for Just Immigration, an immigrants’ rights group that focuses on black migrants, bailed out a Haitian woman who had been held in a detention facility in Southern California. The woman had fled domestic abuse in her home country, according to Devonte Jackson, an organizer with the group. BAJI bought the woman a bus ticket to Florida so she could visit her family for Mother’s Day.

The term “mama,” as it’s used by the National Black Mamas Bail Out Day campaign, is broadly defined to include not just women with biological children, but all women—including trans women—who are linchpins for their families and neighborhoods. “It’s about knowing and naming that black women play such a critical role in our communities,” Hooks says.

The number of women behind bars in the United States has increased 700 percent since 1980, according to the Sentencing Project. More than 100,000 women are currently in jail. Many have not been convicted of anything but are unable to make bail, and a disproportionate number of them are black. Eighty percent of incarcerated women are mothers, according to the Vera Institute of Justice.

Nationally, the median bail set for a felony charge is $10,000, almost a year’s income for the average person unable to meet bail, according to the Sentencing Policy Initiative. Nearly 90 percent of inmates awaiting trial can’t afford bail; The average bail amount in felony cases has nearly tripled since 1990.

Bail reform is a key part of the national policy platform released last summer by the Movement for Black Lives, a broad coalition of groups affiliated with the Black Lives Matter movement. Many of the groups bailing out women this week are also working on efforts to pass local and state legislation that would abolish cash bail in their jurisdictions. Earlier this year, New Orleans and New Jersey eliminated cash bail requirements for a range of low level offenses.

This weekend, organizers in some cities are holding events to welcome newly freed women back home. In Atlanta, organizers are hosting a picnic for the women and their families on Mother’s Day. Volunteers will help connect the women with resources for housing, employment, and legal assistance, Hooks says. The groups are also raising money for a possible bail-out effort to commemorate Father’s Day on June 18.