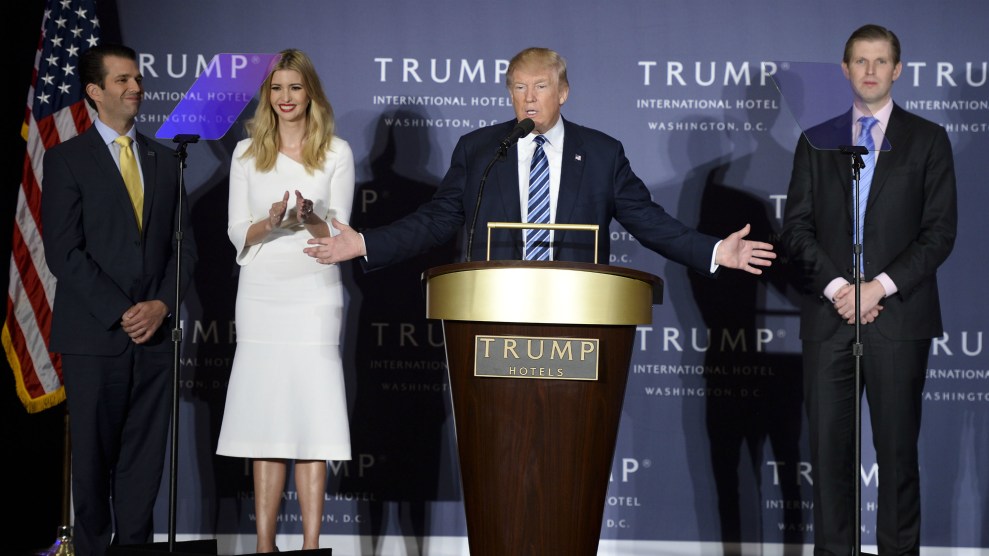 President Donald Trump revealed an outline of his big tax reform plan on Wednesday. It’s light on specifics and even lighter on details about how the administration might pay for what it describes as the “biggest tax cut” in US history. But one thing is perfectly clear: Trump and his family could save billions of dollars. Here are four ways Trump’s tax proposals would help people named Trump.

The estate tax, which applies to wealth that deceased people pass on to their heirs, only affects the richest of the richest—roughly 0.2 percent of Americans. Individuals worth at least $5.45 million (or married couples worth at least $10.9 million) will owe estate taxes after their deaths. Currently, assets in excess of this $5.45 million exemption are taxed at 40 percent. President Donald Trump claims to be worth $10 billion, so his heirs could save billions if the estate tax disappears.

The alternative minimum tax requires certain taxpayers to calculate how much tax they owe twice—once using the regular income tax rules and again under AMT rules. Originally, the AMT was structured to prevent wealthy people from abusing the system by avoiding paying their fair share of taxes. We don’t know much about Trump’s taxes, but his 2005 returns, which were obtained by MSNBC, indicate the he earned $153 million that year. Without the AMT, Trump apparently would have paid just $7 million in taxes, according to the New York Times—a tax rate less than 5 percent. But the AMT forced him to pony up an additional $31 million that year, raising his tax rate to about 25 percent. Asked at a Wednesday press briefing how eliminating the AMT would impact Trump’s tax liability, Secretary of the Treasury Steven Mnuchin dodged the question and abruptly ended the briefing.

Many businesses are structured as pass-through companies, meaning that rather than filing taxes as corporations, they “pay taxes through the personal income tax code,” as the Times explains. Trump wants to cut the rate for pass-throughs (as well as for corporations) to just 15 percent, which will certainly enrich anyone named Trump. Since the Trump Organization is a collection of pass-throughs, the organization itself isn’t subject to income tax. Instead, the owners are taxed individually. So Trump and his children would only have to pay 15 percent on their earnings from the family organization in taxes, much lower than the current top rate of 39.6 percent.

Trump wants to eliminate several tax brackets and lower the top individual tax rate from 39.6 percent to 35 percent. Under the new plan, there will be three tax brackets: 10 percent, 25 percent, and 35 percent. That could be a huge giveaway to the Trumps and other wealthy Americans who make millions of dollars each year.