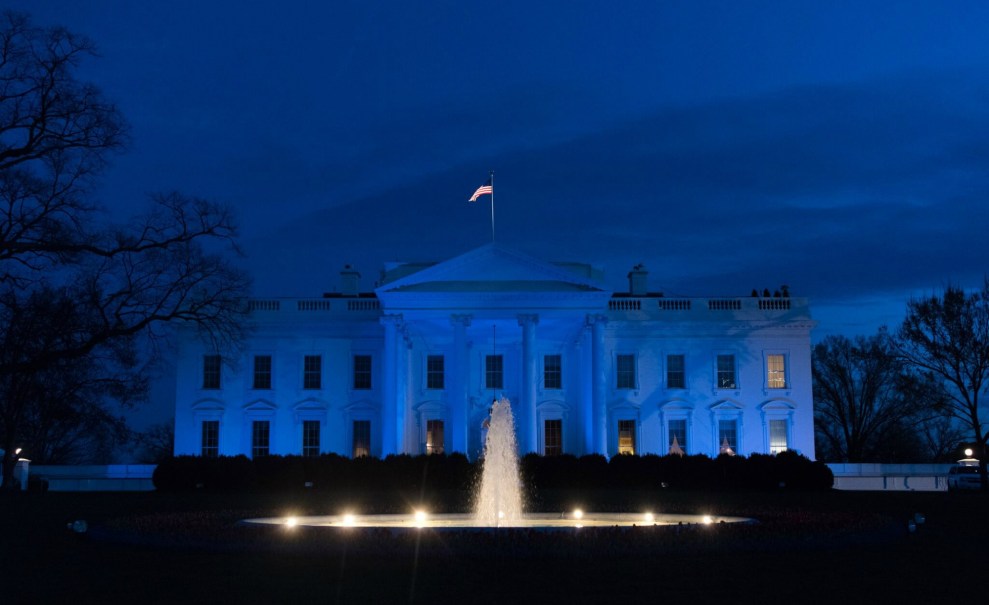 Earlier this month, the White House was drenched in blue light, a gesture of support for the Autism Speaks campaign for Autism Awareness Month. For the first time since the largest autism advocacy group in the country began persuading public spaces to turn on blue lights in 2010, the White House joined Niagara Falls and the Empire State Building to participate in the campaign.

“We come together in unity to increase understanding and acceptance of children and adults with autism, across the spectrum,” the Autism Speaks campaign writes. “As a nation, we must meet the critical need for increased research and support.”

Autism spectrum disorder is a developmental disability affecting more than 3.5 million people in the United States, or 1 in 68 children, according to the Centers for Disease Control and Prevention. (Some advocates believe autism is underdiagnosed in Hispanic, black, and female children.) Those who have it can experience mild to severe difficulty with expressive communication, social interaction, and motor skills. The cause is unknown, but the misconception that common childhood vaccinations can cause autism has been thoroughly disproved. Nonetheless, on the campaign trail, Donald Trump suggested otherwise.

Of all the advocacy and research groups that seek to broaden society’s understanding of autism spectrum disorder, the most prominent and well funded was founded in 2005 by former NBC President and CEO Bob Wright and his wife, Suzanne, after their grandson was diagnosed with autism. The nonprofit received a $25 million donation from Home Depot co-founder Bernard Marcus to assist in its launch. By 2015, (the most recent numbers available), the group’s yearly budget totaled around $60 million.

Autism Speaks funds research into the causes and treatment of autism, works to increase public awareness about it, and advocates on behalf of people with autism and their families. In the past it also explored the discredited link between childhood vaccinations and autism. Suzanne Wright, who died in 2016, often wrote about the devastation of the developmental disability. “Life is lived moment-to-moment,” she wrote in a blog post before the 2013 Autism Speaks policy summit in Washington. “In anticipation of the child’s next move. In despair. In fear of the future. This is autism.”

That dire message of the tragedy of autism has attracted the support of many politicians and celebrities. Sen. Tammy Baldwin (D-Wis.) lauded Autism Speaks in a speech at the opening reception for the summit. “You talk about Autism Speaks. I talk a lot about voices, voices that are too often not heard in our political process,” Baldwin said. “I think we can really break through some partisan divides by uniting around the issue of Autism Speaks.” During the organization’s 2015 Leadership Summit, former Sen. Kelly Ayotte (R-N.H.) said, “I know that you’re making a difference in coming together around autism…Hopefully we can find research that is going to cure autism and certainly provide better treatment for it.” Conan O’Brien hosted the group’s 10th anniversary celebrity chef gala, where musician Pink also performed. Earlier this month, Rep. Paul Ryan (R-Wis.) tweeted a picture featuring a pin of the nonprofit’s logo for “Light It Up Blue.”

But despite the broad support, enthusiasm for Autism Speaks is not shared by those in the broader autism community who complain the organization further stigmatizes autism and includes few autistic people in positions of leadership.

“Throughout their history they have held points of view that are destructive to autistic people.”

“Throughout their history they have held points of view that are destructive to autistic people,” says John Robison, who was once the only autistic person on an Autism Speaks advisory board. “For example, the organization has characterized autism as a debilitating condition that destroys families and prevents autistic people from living happy lives.”

In fact, self-advocates argue, their disability is not something that needs to be cured, but a vital aspect of who they are. Many consider autism and other neurological differences such as ADHD part of normal human variation; given this neurodiversity, they argue, autistic people should be accommodated and supported in society, not cured. Figuring out ways to do this is where research dollars should most productively flow. Past efforts of Autism Speaks to find a cure, they say, is an implicit suggestion that the world would be better off without autistic people. Indeed, some consider this as a form of “eugenics” and call the organization a “hate group.”

Many self-advocates point to a 2009 video produced for one of the group’s awareness-raising events called World Focus on Autism as a prime example of how the organization spreads messages that increase the stigma about autism. “I work faster than pediatric AIDS, cancer, and diabetes combined,” the ominous disembodied voice of autism warns as images of autistic children by themselves appear. “If you’re happily married, I will make sure that your marriage fails. Your money will fall into my hands, and I will bankrupt you for my own self-gain.”

The backlash was immediate. One blogger called the video a “disservice announcement.” A parody video using the same footage featured a similar voice to personify Autism Speaks, intoning, “I will make everyone think you and your children are diseased and disordered and then turn on them.” The Autistic Self Advocacy Network, a nonprofit run by and for autistic people, organized protests. In response to the controversy, Autism Speaks quickly took the video down.

In a blog post years later announcing his resignation from the board, Robison wrote he had hoped to steer the organization and its fundraising power in the right direction by trying to bring attention to how destructive its messages have been to the psyches of autistic people. “We do not like hearing that we are defective or diseased,” he wrote. “We do not like hearing that we are part of an epidemic. We are not problems for our parents or society, or genes to be eliminated. We are people.” Autism Speaks did not respond to the criticism at that time.

As they push back against harmful messaging and misconceptions, the internet “has completely revolutionized the way that autistic people can connect to one another, can connect to other people,” says Julia Bascom, executive director of the Autistic Self Advocacy Network. The web has been game-changing, she says, because it’s “a form of communication that does not have to happen in real time, does not involved eye contact, does not involve body language or tone of voice or anything like that,” all of which are challenges for many autistic people.

But there’s another factor contributing to the rise in autistic self-advocacy, explains Bascom. “In the autism community, you saw a bunch of people being diagnosed starting in the ’90s,” she says. “And we’ve grown up.” Despite this reality, only 2 of the nearly 30 board members at Autism Speaks are autistic. “Autism Speaks is an organization with a beautiful name and a tagline that says it’s time to listen, but they are very bad at listening to autistic people and amplifying the voices of autistic people,” Bascom says.

Over time, Autism Speaks has changed its leadership and taken steps to address some of the criticisms. About six months ago, the group revised its mission statement, taking out language referring to the “hardships” of autism and the search for “a possible cure.” But Bascom points to the research the group continues to fund: Instead of investing in work that helps autistic people communicate or improves their lives in other ways, she says, “there’s this huge amount of research dollars dedicated…to genetic research and looking for biomarkers and things like that, and only a tiny fraction is looking at stuff autistic adults are saying would be helpful.”

Stephen Shore, one of the autistic board members, says that even though he has noticed a shift in organizational priorities—everything from working with autistic people in a more meaningful way to changing the focus of the group’s research—he would like to see more autistic leaders. “It always takes time for an organization to change, so we can’t expect an organization to have a research focus on genetic markers today and then tomorrow it’s focused on researching the efficacy of various approaches for working with children on the autism spectrum,” he says.

Another sticking point for critics is its past research examining possible links between vaccines and autism, even as evidence against the debunked theory continued to grow. The group didn’t take the firm stance that vaccines do not cause autism until 2015. That change came about three months before Bob Wright, who continues to spread anti-vaccine misinformation, stepped down as chairman. (He still sits on the board.) Wright, a powerful businessman in his own right, is a “longtime friend” of Trump, according to White House press secretary Sean Spicer. The president, who has also engaged with the anti-vaxxer conspiracy, has hosted fundraisers for Autism Speaks and encouraged his Twitter followers to donate to the organization in the past. Wright also publicly supported Trump in the 2016 election.

Go Donald trump. The best choice for all republicans and all Americans!

Which leads back to the White House turning blue, something Trump promised the late Suzanne Wright he’d do if he won the election. In the past, Obama had been asked to participate in the “Light It Up Blue” campaign, but advocates quickly lobbied against it, explaining “why that would be harmful, and they did not,” Bascom says. But clearly things have changed. In the White House statement announcing the administration would be participating in the campaign, Trump used the kind of language Autism Speaks has recently backed away from, mentioning the “obstacles” families face and saying, “Ongoing efforts to scan the human genome carry significant potential to better manage the disorder and, ultimately, find a cure.”

*Clarification: An earlier version of this article was unclear about which Autism Speaks board Robison served on.