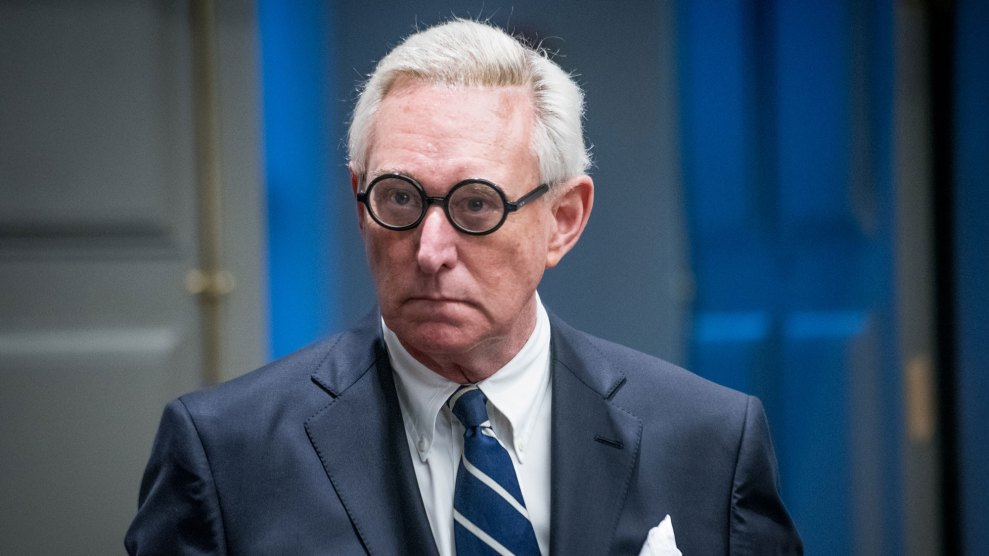 He’s a trailblazer of political mudslinging, a Nixon fanatic, and gleeful spewer of alternative facts. For nearly half a century, Roger Stone has been deploying unconventional political warfare, most recently as an adviser to Donald Trump’s 2016 campaign. Stone’s motto, “admit nothing, deny everything, launch counterattack,” perfectly describes Trump’s behavior during the race and now, his presidency. Stone’s specialty is being a “ratfucker“—a practitioner of dark arts avoided by most mainstream politicians and consultants. (Asked about the term in an interview with Politico, the ever-classy Stone instead smeared Sen. Ted Cruz: “I think he’s the one fucking rats.”)

Stone first worked with Trump in the 1980s, lobbying on his behalf of his businesses and later exploring a 2000 Trump presidential bid. He joined Trump’s 2016 campaign early on, and continued to provide outside support throughout 2016. He peddled conspiracy theories through sites such as Alex Jones’ InfoWars and communicated with an online persona allegedly involved in the hacking of Democratic targets. CNN, Fox, and MSNBC have banned Stone from appearing on the shows because of his offensive remarks. (Stone says they won’t book him because he would just “kick their ass.”) He’s currently being sued for defamation in connection with flyers distributed during the 2010 New York gubernatorial campaign. Most recently, Stone was back in the news because he may be called to testify before the House Intelligence Committee about Trump’s possible connections to Russia. And a new documentary, Get Me Roger Stone, is due out on Netflix next month.

Stone got his start in political trickery while he was a student at George Washington University. Stone donated money to the campaign of Pete McCloskey, Nixon’s rival in the 1972 Republican primary, but he made the donation in the name of the Young Socialist Alliance and sent the receipt to a Rhode Island newspaper. The scam was unearthed during a Watergate-related congressional hearing a year later, costing Stone his staff position with Kansas Sen. Bob Dole.

Stone would later immortalize his Nixon fandom by tattooing the disgraced president’s face on his back. He has said he sees parallels between Tricky Dick and Trump: “They’re both interested [in] what works and in getting things done.”

YES! My Nixon tattoo mentioned tonight on @allinwithchris is REAL. Many have asked – proof! pic.twitter.com/9zSfTjc9aA

In 1980, Stone co-founded of one of the first “double-breasted” political consultancies, which combined running campaigns and lobbying. The firm—originally known as Black, Manafort, and Stone—did work for Republicans like Ronald Reagan, Phil Gramm, Arlen Spector. It also worked with  Trump, who formed an exploratory committee with Stone to weigh a presidential run with the Reform Party. One of the original partners was Paul Manafort, Reagan’s convention director and Trump’s future campaign manager. Lee Atwater, the GOP operative who used the infamous Willie Horton case to help sink Michael Dukakis’ 1988 presidential campaign, became a full partner in 1984.

The firm also signed up some shady international clients. As Stone explained, it “lined up most of the dictators in the world that we could find; pro-Western dictators, of course. The good ones.” It represented clients such as a business group connected to Philippine dictator Ferdinand Marcos, Angola’s UNITA rebels, and the Bahamian government—which was under scrutiny for alleged drug trafficking.

Soon after Election Day 2000, when it became clear the next president would be decided by the Florida recount, Stone got to work. In mid-November, he sent a few dozen protesters, mostly preppy Republican staffers, to the offices where Miami-Dade County election officials were counting paper ballots by hand. The mob found where officials were counting ballets and chanted loudly for them to stop. (“Stop the fraud!“) The incident was dubbed the “Brooks Brothers riot.” The recount stopped soon afterward, and the Supreme Court ultimately handed the presidency to George W. Bush. Stone has since expressed regret for helping Bush win: “Maybe there wouldn’t have been a war if I hadn’t gone to Miami-Dade.”

In 2007, New York Senate Majority Leader Joe Bruno hired Stone to go after Gov. Eliot Spitzer. Not long after that, Bernard Spitzer, Eliot’s father, received an aggressive voicemail message from what sounded like Stone. The caller said that if Bernard didn’t come clean about making “shady campaign loans” to his son, he would be “arrested and brought to Albany.” Stone denied making the call, suggesting it may have been a skilled impressionist. Nevertheless, he was fired by Bruno. Spitzer would later resign after he was caught in the company high-priced prostitutes. Stone claims he had a hand in the Democratic governor’s downfall. He learned of Spitzer’s hooker habit from a woman in Miami, he said, and sent a letter to the FBI telling what he knew.

During the 2008 primary season, Stone launched an anti-Hillary Clinton PAC called Citizens United Not Timid, whose web address was WhatIsHillary.com. The group didn’t do much beyond selling T-shirts with a logo resembling a woman’s crotch. When Citizens United, the conservative group whose case resulted in the landmark 2010 Supreme Court ruling on campaign finance, asked Stone to change the name, he replaced “united” with “uniformly.” The acronym remained intact. 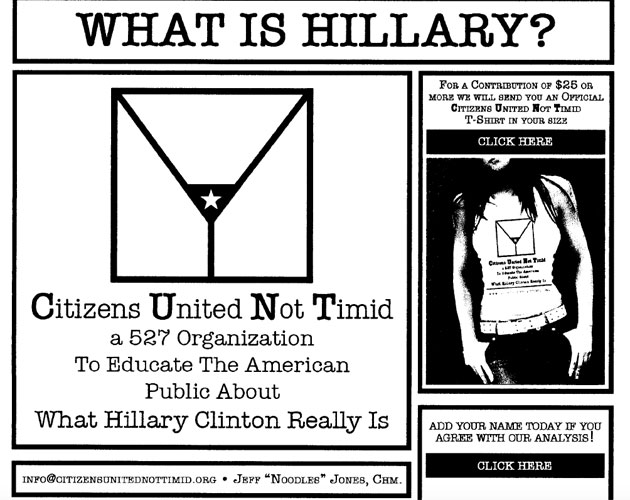 From the website of of Citizens United Not Timid

At the tail end of the 2008 primaries, the conservative blogosphere spat out a rumor that future first lady Michelle Obama had used the word “whitey” to describe white people while speaking at Trinity University. Stone jumped on it, telling Fox News that he believed one of the news networks had an unreleased tape of the comments. Stone provided no evidence of this and no recording has ever been unearthed.

In his best-selling 2013 book, The Man Who Killed Kennedy: The Case Against LBJ, Stone posits that Lyndon Johnson, fearing John Kennedy would remove him from his 1964 reelection ticket, arranged to have his boss killed in Dallas in 1963. “He’s the linchpin of the plot,” Stone said in an interview, adding, “he’s responsible for at least eight murders.” 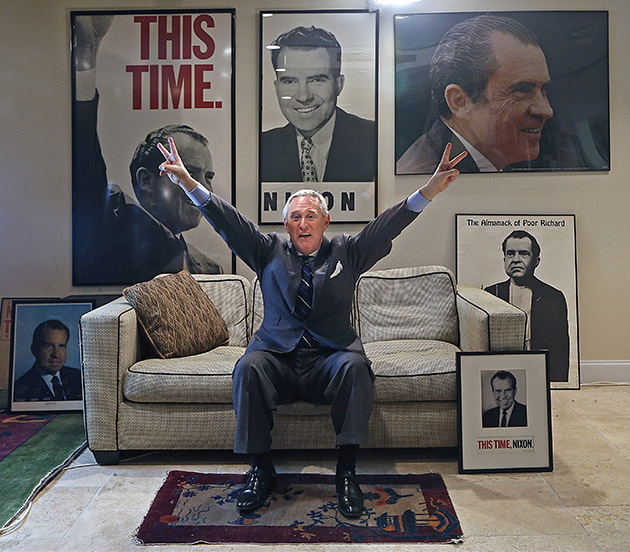 In his 2016 book, The Clintons’ War on Women, Stone claimed that Chelsea Clinton’s real father is Webster Hubbell, an old friend and colleague of Hillary Clinton who spent more than a year in jail for his role in the Whitewater scandal. Stone even imagines that Chelsea had four plastic surgeries as a teenager so she wouldn’t resemble Hubbell. (Stone’s co-writer, Robert Morrow, is a longtime Hillary Clinton hater who has posted sexual and conspiratorial messages about her on Facebook. He ran for president as a #NeverTrump candidate.)

Last August, Stone tweeted that it would soon be “Podesta’s time in the barrel,” referring to Hillary Clinton’s campaign chairman John Podesta. On October 2, he tweeted “Wednesday @HillaryClinton is done. #Wikileaks.” Later that week, WikiLeaks released emails from Podesta’s account that had been obtained by hackers, raising the possibility that Stone had received advance notice. Over the summer, Stone claimed he had communicated with WikiLeaks founder Julian Assange directly, but he now says he communicated through someone else. (Recently, Jerome Corsi of InfoWars wrote that Stone’s Podesta tweet was actually referring to research Corsi had collected on Podesta that they planned to release.) Stone also recently revealed that he was in contact with Guccifer 2.0, the online persona American intel officials believe is a front for Russian-backed hackers. But Stone maintains that he communicated with the account only briefly on Twitter.

In Trumplike fashion, Stone took to Twitter in January to spread his latest unsourced claim: “Yes, I believe I was poisoned to stop me from exposing the ‘Russian Hacking’ LIE b4 the Congressional Investigation.” Stone says he became dangerously ill last December, and that he believes the “Deep State” tried kill him so it could be blamed on the Russians. Stone’s tweet came just a couple weeks before the release of his latest book, The Making of the President 2016. He says he doubts he’ll ever know exactly who supposedly tried to knock him off. “Let’s face it,” he told Time, “there would be too many suspects.”