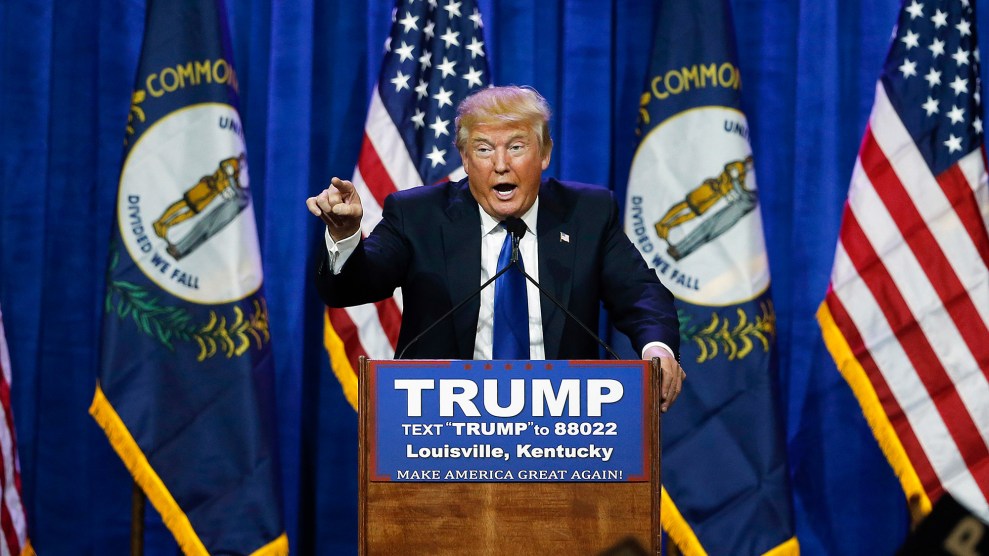 Donald Trump at a March 2016 rally in Louisville, Kentucky, where he encouraged his supporters to kick out protestersJohn Bazemore/AP

For once, liberals and white supremacists agree on something: President Donald Trump’s rhetoric incites right-wing violence. On Monday, Matthew Heimbach, a notorious 26-year-old white nationalist who was filmed shoving an African American woman at a Trump campaign rally in March 2016, filed a lawsuit claiming that he had simply been acting “pursuant to the directives and requests of” Trump himself.

At the rally in Louisville, Kentucky, three African American protesters drew jeers from the crowd, prompting Trump to shout from the stage, “Get ’em outta here!” Heimbach, standing nearby, began shoving Kashiya Nwanguma, a student at the University of Kentucky. Nwanguma also claimed she was called a “nigger and a cunt” (Heimbach denies it was him). After the incident, Heimbach wrote on his blog, “White Americans are getting fed up and they’re learning that they must either push back or be pushed down.”

A month later, Nwanguma filed a lawsuit in federal court accusing Heimbach and another man of assault and battery, and sought to hold Trump liable for inciting the violence. On April 1, 2017, a judge squashed a challenge to Nwanguma’s case filed by Trump, writing that because violence had broken out at previous rallies and known hate-group members were in attendance in Louisville, Trump’s directive for attendees to remove the protesters was “particularly reckless.”

Acting as his own attorney, Heimbach has filed a counterclaim denying the charges. If he is found guilty, he said in his claim, he was only acting on Trump’s orders. Citing among other incidents the February 1, 2016, Trump rally in Iowa where the then-presidential candidate instructed a crowd to “knock the crap out of [disrupters]”—”I promise you,” the president said, “I will pay for the legal fees”—Heimbach argued that the president’s campaign should be held financially responsible for any penalties levied against Heimbach. “Any liability,” he wrote, “must be shifted to” Trump.

I met Heimbach in 2013, while directing a documentary for Vice about the White Student Union he had formed at Towson University outside Baltimore, Maryland. The WSU patrolled the suburban campus in search of “black predators.” “White Southern men,” Heimbach said, “have long been called to defend their communities when law enforcement and the state seem unwilling to protect our people.” While I accompanied Heimbach’s crew, the only crime we witnessed was a drug deal by two white students—which the WSU members ignored. They did, however, celebrate the anniversary of Abraham Lincoln’s assassination.

Heimbach exemplifies and has ridden the wave of white-extremist radicalization since Barack Obama’s election in 2008. During our interviews, he denied being an outright white supremacist or racist. “I hate Hitler,” he told me, explaining that he despised the Ku Klux Klan and neo-Nazis. “They’re just low-rent thugs trying to make themselves feel better. Frankly, they’re an embarrassment.”

But over the next several years, Heimbach came out as a full-on white nationalist. He made common cause with members of the National Socialist Movement, the Aryan Terror Brigade, and the Imperial Klans of America. He formed a new group, the Traditionalist Youth Network, which openly advocated partitioning the United States into mini-“ethno-states” based on race. He battled with anti-fascists in Indiana. “The political establishment has made an entire generation of young white men and women into fascists, and that’s a beautiful thing!” he told a New York Times reporter in 2016.

Heimbach rallied behind Trump’s candidacy, and started wearing a red “Make America Great Again” ball cap everywhere. The footage of him shoving Nwanguma in Louisville was emblematic of how Trump’s nativist dog whistle was pulling extremist sentiment into the mainstream. “Now there’s some viral footage of several heated moments in Louisville,” Heimbach wrote in a blog post on the Traditionalist Youth Network website after the incident:

One features yours truly helping the crowd drive out one of the women who had been pushing, shoving, barking, and screaming at the attendees for the better part of an hour. I’ll avoid any additional Trump events to ensure that I don’t become a distraction, but the entire point of the [Black Lives Matter movement’s] tactics is to push people until they push back. It won’t be me next time, but White Americans are getting fed up and they’re learning that they must either push back or be pushed down.

Even if the odds that Heimbach’s lawsuit will succeed are infinitesimal, the case is a revealing indication of the far right’s symbiotic relationship with Trump. White nationalists, apparently, really do believe the president has been nudging them to commit violence, or at least promising to tolerate it if they do. When in February sources inside the White House told reporters that Trump planned to no longer target white supremacists as part of the government’s anti-terrorism efforts, the editor of the neo-Nazi site Daily Stormer cheered, “Yes, this is real life…Donald Trump is setting us free.” Others were heartened by Trump’s silence in the wake of the murder of six people at a mosque in Quebec City by a white nationalist that same month. The rioters in Berkeley, California, last weekend—some wearing MAGA hats—seem to have heard the same music that Heimbach did last March.