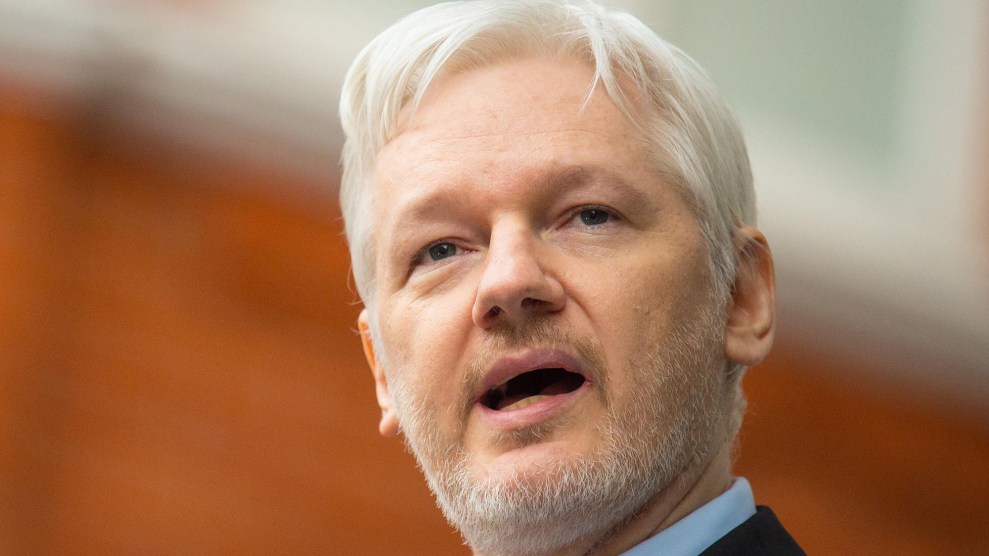 More than a week after reports that the US government is preparing criminal charges against WikiLeaks founder Julian Assange and other members of his organization, a lawyer for Assange says he’s received no information about what the government wants from his client.

“The only thing that’s happened is there’s been a very vibrant rumor mill,” Barry Pollack, Assange’s US-based lawyer, tells Mother Jones. “Obviously there’s been a lot of chatter, but the only thing I’ve seen is that the Department of Justice has sort of confirmed that it is looking at the Vault 7 leak,” —WikiLeaks’ March 7 dump of thousands of pages of CIA hacking tools.

“The Department of Justice has not gotten back to me in any way or answered any of my repeated attempts to enter a dialogue with them to tell us what they’re actually doing,” Pollack says. Other than what’s been reported in the press, he says, he has no idea what charges the government might be contemplating. He understands that the government doesn’t always share everything with defense lawyers, especially before a suspect is charged or arrested, but he says, “It is uncommon, in fact unprecedented in my experience, that they’re not willing to engage in a broad conversation about the status of the investigation and where a particular person fits in with respect to an investigation.”

Assange has been holed up in the Ecuadorian Embassy in London since 2012 to avoid being detained by British authorities and sent to Sweden, where he’s wanted for questioning related to accusations of sex crimes. Assange has claimed that the accusations are “dirty tricks” to bring him back to Sweden and then extradite him to the United States, a possibility that Ecuador cited when it granted him asylum in 2012.

British authorities won’t give him safe passage to leave the country, and the United Nations Human Rights Council Working Group on Arbitrary Detention has called his limbo “a state of arbitrary deprivation of liberty.” Meanwhile, Assange has continued to publish controversial materials, including thousands of Democratic National Committee emails and memos during the 2016 presidential campaign and 50,000 emails belonging to Hillary Clinton campaign chairman John Podesta, moves that the US government says were part of a Russian campaign to undermine the liberal order and prevent a Clinton presidency.

On March 7, Wikileaks published what it called Vault 7, a 8,761-page cache of documents related to the CIA’s hacking tools and methods. It could be the largest leak of CIA documents in history, according to the New York Times, and it exposed tools that CIA hackers use to compromise targets around the world. A month later, CIA Director Mike Pompeo delivered a blistering speech attacking WikiLeaks, saying that the organization “walks like a hostile intelligence service and talks like a hostile intelligence service.” He said WikiLeaks had been used by Russian military intelligence to publicize stolen Democratic National Committee materials and accused Russian state-run television network RT of collaborating with WikiLeaks.

“We can no longer allow Assange and his colleagues the latitude to use free speech values against us,” Pompeo said. “To give them the space to crush us with misappropriated secrets is a perversion of what our great Constitution stands for. It ends now.”

A week later, US Attorney General Jeff Sessions was asked about arresting Assange “once and for all.” He seemed to suggest that was his intent, saying, “We’ve already begun to step up our efforts, and whenever a case can be made, we will seek to put some people in jail.”

Later that day, CNN and the Washington Post reported that the Justice Department was getting close to making a move in the case. “US authorities have prepared charges to seek the arrest of WikiLeaks founder Julian Assange,” CNN reported. According to the network, the new discussion of charges happened because “investigators found what they believe was proof that WikiLeaks played an active role in helping Edward Snowden,” the former NSA contractor who provided journalists with thousands of documents related to that agency’s operations around the world.

Unless and until the Department of Justice comes to the table, I don’t see a path forward.”

The Department of Justice didn’t respond to questions about its plans for Assange. In a statement to Mother Jones, a CIA spokesperson declined to confirm the authenticity of the Vault 7 documents and said that the “American public should be deeply troubled by any Wikileaks disclosure designed to damage the Intelligence Community’s ability to protect America against terrorists and other adversaries.”

As a candidate last year, Trump famously said, “I love WikiLeaks!” Pompeo repeatedly cited WikiLeaks materials as he attacked Clinton, and he tweeted out links to documents released by WikiLeaks. Now the Trump administration appears poised to take a much harsher line on Assange than the Obama administration, whose Justice Department found that WikiLeaks’ publications were not substantially different from those of news organizations.

The reports of possible charges come as congressional investigators and the FBI probe potential connections between Donald Trump campaign officials and Russian interests who allegedly hacked into the DNC computer system and Podesta’s email account. Some have accused WikiLeaks of working with the Russians to publish the material—a charge Assange vociferously denies. Pollack says those investigations shouldn’t have a legal impact on Assange’s case. “It shouldn’t make any difference whatsoever what the source is or whether or not the government approves or disapproves of the source or the information itself,” Pollack says.

For now, he and his client have no choice but to wait and see what the Justice Department decides to do.

“The United Nations has found that he is being unlawfully detained at the embassy, and I don’t see how any of that changes without there being some dialogue and some negotiation,” Pollack says. “We have continually said that we are open to that and indeed would welcome it. Unless and until the Department of Justice comes to the table, I don’t see a path forward.”