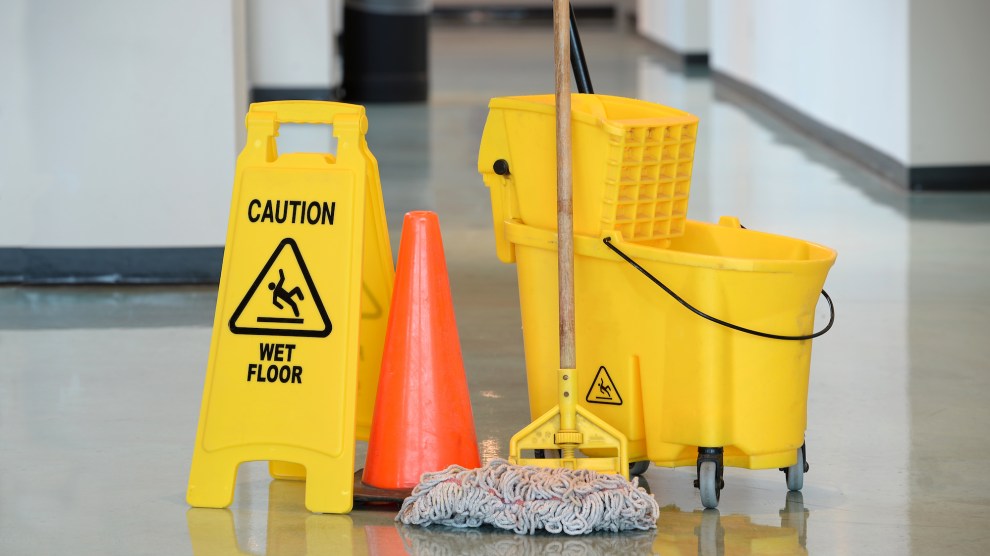 When Carlos Eliezer Ortiz Muñoz arrived at the Denver Contract Detention Facility in Aurora, Colorado, in 2014, he was given a clothing package and assigned to a housing unit, where he’d have to stay for months. Like tens of thousands of other immigrants across the country who are kept in Immigration and Customs Enforcement (ICE) detention each night, Ortiz and his fellow detainees were waiting to see if they’d win their immigration cases or face deportation.

Before long, the private prison company that ran the detention center put Ortiz to work. Each day in his housing unit, guards assigned a crew of six detainees to clean the private and common living areas; scrub down toilets, showers, and eating tables; and sweep and mop floors. “None of us got paid anything,” Ortiz said in a court statement. But he couldn’t protest—he knew he could be sent to solitary confinement if he refused to do the cleaning. “Some of the guards would threaten us by saying, ‘¿Quieres ir al hoyo?‘” Ortiz said. “‘You want to go to the hole?'”

“Some of the guards would threaten us by saying, ‘¿Quieres ir al hoyo?‘ ‘You want to go to the hole?'”

The GEO Group, the private prison company that operates Aurora, allegedly forced more than 50,000 immigrants like Ortiz to work without pay or for $1 a day since 2004, according to a lawsuit that nine detainees brought against the company in 2014. On February 27, a federal judge ruled that their case could proceed as a class action, breathing new life into a suit that exposes the extent to which the for-profit company relied on cheap or unpaid detainee labor to minimize costs at the Aurora facility.

“If we’re right, and these practices are illegal, it has tremendous implications on the ability of the government to use detention in the immigration enforcement architecture,” says Andrew Free, an immigration attorney on the detainees’ legal team. “It would prompt a serious rethinking of whom to detain, and how much it’s going to cost.”

GEO incarcerates more immigrants (and receives more public money to do so) than any other detention center operator, according to an analysis by the anti-detention group CIVIC. And its business detaining immigrants for ICE is only expected to grow “with this increased and expanded approach to border security,” CEO George Zoley said in a February earnings call.

According to the lawsuit, there were two ways GEO cashed in on cheap labor from detainees. There was the facility’s sanitation policy, under which detainees like Ortiz were required to work as janitors without pay. If they didn’t, they risked being punished with solitary confinement, according to GEO’s local detainee handbook. Detainees could also apply for a job in Aurora’s voluntary work program, which paid them exactly $1 a day to keep the facility running.

In a statement, GEO spokesman Pablo Paez wrote that GEO’s volunteer work program policies follow federal standards. “We have consistently, strongly refuted the allegations made in this lawsuit, and we intend to continue to vigorously defend our company against these claims,” he said. “The volunteer work program at all immigration facilities as well as the minimum wage rates and standards associated with the program are set by the Federal government under mandated performance-based national detention standards.”

“The problem isn’t the existence of the work program. The problem is this inherently coercive relationship that makes the workers uniquely vulnerable to exploitation and abuse.”

ICE’s standards for immigration detention centers say that voluntary work programs are intended to give detainees “opportunities to work and earn money while confined.” Yet David Fathi, director of the ACLU’s National Prison Project, says it’s questionable whether such programs are truly voluntary for people “held in captivity, against their will.” While working may be a positive outlet for incarcerated people, Fathi says, “the problem isn’t the existence of the work program. The problem is this inherently coercive relationship that makes the workers uniquely vulnerable to exploitation and abuse.”

Some people in Aurora’s program stripped and waxed floors, while others did laundry, prepared food, cut hair, or worked in the library. Shifts lasted between three and eight hours, according to a copy of Aurora’s detainee work program policy, and detainees were paid the same $1 no matter how long they were assigned to work.

Lourdes Argueta volunteered. She was given a job as a janitor in the medical unit, where she and other detainees “clean toilets, sweep and mop floors, pull carpets and clean floors, clean windows, remove trash, clean patients’ rooms (including cleaning up blood, feces and urine), and perform other cleaning tasks,” she said in a statement to the court. She also worked in GEO’s booking area, creating new detainee files and putting together packages of clothing for new detainees.

During a deposition, GEO’s assistant business manager at Aurora testified that if there were no “voluntary workers” like Argueta, the company would need to bring in additional officers, paid at hourly wages set by rules in GEO’s contract, to get the same work done. So how much would the company have to shell out if it didn’t rely on cheap detainee labor? Under GEO’s contract with ICE, which incorporated federal wage regulations, the lowest allowable employee wage at the Aurora facility was $10.90 an hour for food service workers. A typical shift in the voluntary work program lasted approximately seven hours, according to the detainee work program policy—so if GEO had hired additional employees to do the work, it would have cost the company nearly $76.30 per shift. (That’s a lowball estimate, given that some detainees worked jobs that would have paid significantly more.) Instead, they spent $1.

If GEO had hired employees to do those jobs instead, the company would have spent more than $125,000 in wages and benefits that month. GEO’s actual payments: $1,680.

That translates to huge cost savings. Take, for example, November 2012, when detainees took hundreds of voluntary work program shifts. If GEO had hired employees to do those jobs instead, the company would have spent more than $125,000 in wages and benefits that month. GEO’s actual payments: $1,680.

That number only increases if you account for Aurora’s sanitation policy, under which all detainees in the facility did janitorial work in the housing units for no pay, the lawsuit alleges. GEO employees doing the same work would have been eligible for $12.01 per hour in wages, under the company’s contract with ICE.

“If GEO was absorbing all of the labor costs, its profit would be less,” explains Nina DiSalvo, executive director of Towards Justice, one of the firms representing the detainees. Andrew Free, the attorney, goes further: “It turns their profits upside down,” he claims. “It would be a money-losing enterprise if they had to pay the people to operate this facility under the current contract.” (Given that the Department of Homeland Security pays an average of $126.46 per day to detain one immigrant, that may not be a stretch.)

So how does the company get away with it? The “dollar a day” policy dates back to 1978, when Congress passed an appropriations bill funding voluntary detainee work programs, says Jacqueline Stevens, the head of Northwestern University’s Deportation Research Clinic, whose research on detainee labor informed the 2014 suit. But that was before the rise of private prison companies, she adds—and it was initially implemented in government-run facilities, not those run by for-profit companies beholden to shareholders. “GEO’s privately held, so there’s an extra concern that they may be exploiting people in a way an institution run by the federal government would not be,” Stevens explains.

When immigrants inside Aurora filed grievances asking why they weren’t paid more, GEO’s assistant business manager replied by saying that ICE, not the company, set the daily rate. But in February’s order, Colorado District Court Judge John Kane ruled that while ICE only reimburses GEO for $1 per detainee shift, the company could pay more if it wanted. (And in fact, in at least one other location, it appears to have paid detainees more than the $1 ICE reimbursed it for, Stevens says.) While the detainees aren’t eligible for employment under GEO’s contract, their lawsuit argues that GEO “unjustly enriched” itself by misleading them about how much it could pay.

While the detainees aren’t eligible for employment under GEO’s contract, their lawsuit argues that GEO “unjustly enriched” itself by misleading them about how much it could pay.

“By far the greatest expense of running any detention facility is labor,” Fathi says. “GEO has got to be worried that if this practice is unlawful at one facility, it’s presumptively unlawful at all facilities.” If they lose, he adds, “they have to be looking at not just what they would have to pay at Aurora.”

The lawsuit also argues that the sanitation policy violated the Trafficking Victims Protection Act, a modern anti-slavery statute. To maintain cleanliness in the housing units, GEO used housekeeping crews like the one Ortiz was assigned to when he arrived at Aurora. According to GEO’s local detainee handbook, refusing to clean was considered a “high moderate”-level offense and was punishable by several possible sanctions, including up to three days of so-called “disciplinary segregation”: solitary confinement. Plaintiff Demetrio Valerga told the court in a statement that he “did the work anyway because it was well known that those who refused to do that work for free were put in ‘the hole.'” With the sanitation policy in place, the company employed just one janitor for the 1,500-bed facility.

ICE’s own standards say detainees can’t be required to work, except for keeping “immediate living areas” neat: making their beds, stacking loose papers, and keeping the floor and furniture uncluttered. Under questioning during a deposition, Aurora’s assistant warden of operations made it clear that GEO considered all parts of the housing unit (bathrooms and day areas, as well as cells) to be fair game. Yet a federal watchdog agency recently found that requiring detained immigrants to clean any common areas used by all detainees was a violation of ICE standards.

“Imagine you see people being yelled at by guards and thrown in solitary all the time,” Free says. “In order to avoid solitary yourself, you have to maintain the sanitary nature of the facility you’re being housed in. And then they say, ‘If you want, we’ll pay you a dollar a day to do something else. If you don’t, you’re still going to work when we tell you to.’ And the company that’s on the other end of this is making millions.”