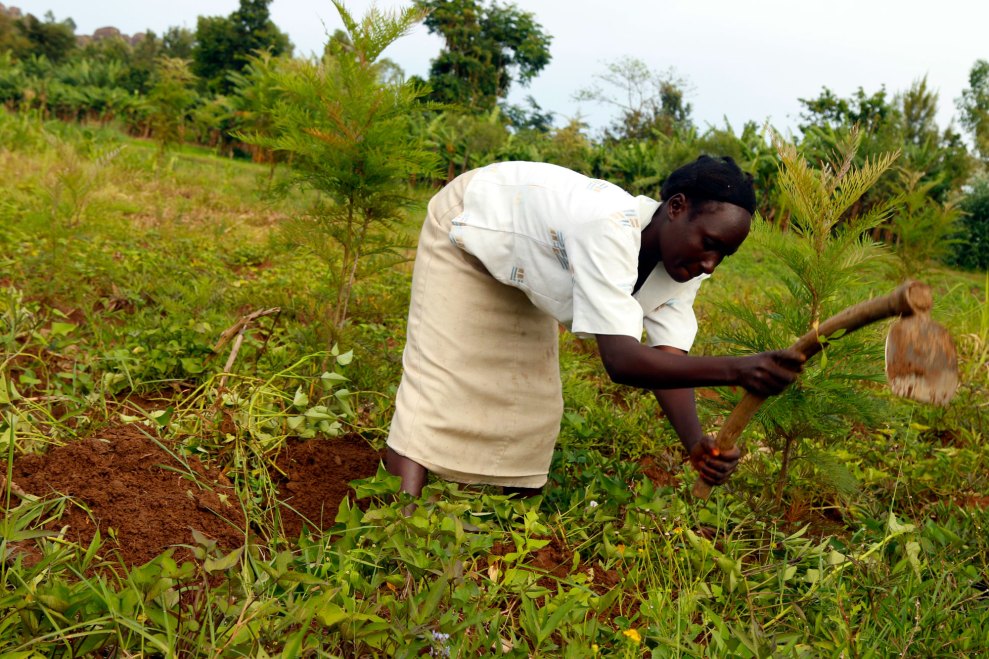 Smallholder farmers in Africa like Christine Wasike are among the world’s most vulnerable people to climate change. Tim McDonnell

On Tuesday, President Donald Trump took his most concrete step thus far to unravel his predecessor’s legacy on climate change, with a wide-ranging executive order that dismantles several Obama-era policies to restrict greenhouse gas pollution. The order outraged environmentalists—Sen. Ed Markey (D-Mass.) called it “a declaration of war on American leadership on climate change”—but it wasn’t very surprising: It simply followed through on a threat contained in the budget Trump proposed two weeks ago.

“We’re not spending money on that anymore,” Mick Mulvaney, director of the White House’s Office of Management and Budget said then, in response to a question about climate change during a press conference. “We consider that to be a waste of your money to go out and do that.”

That stance could be a big problem for the dozens of farmers I’ve met across sub-Saharan Africa as a journalist reporting on climate change impacts to food security.

Christine Wasike is a maize farmer in Bungoma, an agricultural haven in western Kenya. She works half an acre by hand to produce food for her husband and several young children; if she’s lucky, there is enough left over to sell for cash to pay for school fees, clothes, healthcare, farm equipment, and other necessities.

A majority of people on the continent depend directly on subsistence agriculture for their livelihoods and are among the world’s most vulnerable people to climate change.

Like all but a handful of wealthy farmers in Kenya who can afford irrigation systems, she relies exclusively on rainfall to water her crops, and last year, which scientists recently confirmed was the hottest ever recorded, the rains came late and light. As a result, Wasike’s harvest was disappointing, and her income for the season was less than $50, a net loss after covering the cost of seeds and other farm expenses.

“When there is drought farmers suffer a lot,” she says. “There is a lot of hunger, especially with children at home.”

Stories like Wasike’s are increasingly commonplace in sub-Saharan Africa. A majority of people on the continent depend directly on subsistence agriculture for their livelihoods, and because they rely almost exclusively on rainfall for water and often can’t afford adaptive technologies, they are among the world’s most vulnerable people to climate change. As a result, they are among those with the most to lose from if Trump reverses Obama’s climate change policies.

As America walks away from its commitment to help slow the global warming that it holds the primary responsibility for creating in the first place, Wasike, her children, and millions of her peers will be much more likely to face a future defined by hunger and poverty.

The main target of Trump’s executive order is the Clean Power Plan, a regulation hammered out during Obama’s second term that imposes limits on greenhouse gas emissions from power plants. The regulation, which was Obama’s signature achievement on climate change, aims to slash the carbon footprint of the nation’s power sector by 32 percent below 2005 levels by 2030. But to Scott Pruitt, the new administrator of the Environmental Protection Agency, it was never more than a plot to “kill jobs throughout the country,” as he told ABC News on Sunday. As directed by Tuesday’s order, the EPA will now review all policies that “serve as obstacles or impediments to energy production”—including the Clean Power Plan. At the same time, the Justice Department will back down from defending the Plan against legal attacks.

These policy changes will reverberate far beyond the coal-fired power plants they are meant to protect. That’s because the Clean Power Plan is the domestic regulation underpinning the US commitment to the Paris Agreement, the groundbreaking global climate accord reached in December 2015. Although the agreement, signed by Obama shortly before he left office, contains language that would make it difficult for Trump to formally withdraw within the next few years, his order effectively accomplishes the same thing. Without the Clean Power Plan, America’s participation in the agreement becomes meaningless. And without America, the world’s second-biggest climate polluter after China, the whole agreement goes up in smoke.

Sub-Saharan Africa already has the world’s least-productive farms: Average yields of staple grains per hectare are only one-quarter of those in the US and Europe.

As a result, the chance that global temperature rise will stay “well below” 2 degrees Celsius above pre-industrial levels, the limit agreed to in Paris, will vanish. That kind of warming will produce a variety of life-threatening effects in the US which, contrary to Mulvaney’s assertion, would cost taxpayers far more—in the form of damage to coastal property, lost agricultural production, increased electrical bills, public health threats, and other costs, according to a recent economic analysis lead by former New York mayor Michael Bloomberg—than what they will save by slashing climate programs.

Still, the impact to developing countries—where livelihoods are more often linked directly to the land and where the money is scarce to, for example, build a storm surge barrier or develop a drought-resistant seed—will likely be even more severe. Millions of the world’s most vulnerable people will suffer the consequences of industrial pollution they did not produce. In other words, they will be left to clean up America’s mess.

In Africa, the most severe impacts will be to agriculture and food security. Sub-Saharan Africa already has the world’s least-productive farms: Average yields of staple grains per hectare are only one-quarter of those in the US and Europe, according to the World Bank, due mainly to poor soil quality and lack of access to financing and the latest farming techniques and equipment. Low productivity not only leads to hunger—23 percent of Africans, 220 million people, are chronically undernourished, the world’s highest rate—but also impedes economic growth, since agriculture is the main income source for a majority of people.

Rising temperatures (Africa has warmed by about 1 degree Fahrenheit in the last 50 years, and is expected to continue warming faster than the global average rate) and increasingly erratic rainfall are making the situation worse. An analysis for the 2014 Intergovernmental Panel on Climate Change report found that prolonged dry spells and high temperatures could reduce yield of staple grains across the continent up to 35 percent by 2050, even as the continent sees its population double.

The consequences will be wide-reaching. Market prices will climb, calorie availability will drop, and national economies will suffer: A recent analysis by the OECD found that reduced agricultural productivity because of climate change could sap up to 4 percent of sub-Saharan Africa’s GDP by 2060, the world’s highest rate of loss. Some areas may become unusable for farming or grazing, forcing people to look for new land, which in turn can lead to territorial ethnic conflicts and deforestation. Food and water scarcity can prompt mass migrations, like the one currently underway in the Sahel, and humanitarian crises, like the 20 million people currently in need of emergency food assistance in southern Africa. It can contribute to radicalization and the empowerment of terrorist groups like Boko Haram, which has benefited from destitution caused by the desiccation of Lake Chad.

These impacts will be borne in particular by the rural poor, who often have no “plan B” when the harvest fails, and in particular by women, who typically are responsible for growing crops for food and cash (in addition to other household duties).

Fortunately, in most cases, the solutions needed to make Africa’s farmers and pastoralists more resilient to climate change are nothing very fancy, expensive, or high-tech. People need training on basic techniques to conserve water and improve soil quality; they need access to microloans to afford better seeds, tools, fertilizer, and irrigation; they need secure land rights; they need better roads to take their produce to markets. The fate of programs to promote these solutions now in place at the the US Agency for International Development, now under the purview of Secretary of State Rex Tillerson, remains unclear.

What farmers don’t need are unchecked greenhouse gas emissions from the US The specific numbers on projections of crop yields, hunger, poverty, and other factors differ slightly depending on which analysis you read, but one trend is consistent: The hotter the world gets, the worse off Africa’s rural poor will be. And if that doesn’t bother this administration, it should, since economic depression and political instability are ultimately harmful to US business, military, and diplomatic interests in Africa.

Deleting climate change from the EPA’s rulebook and the federal budget won’t make it go away—and it won’t settle our environmental debt to the rest of the world.