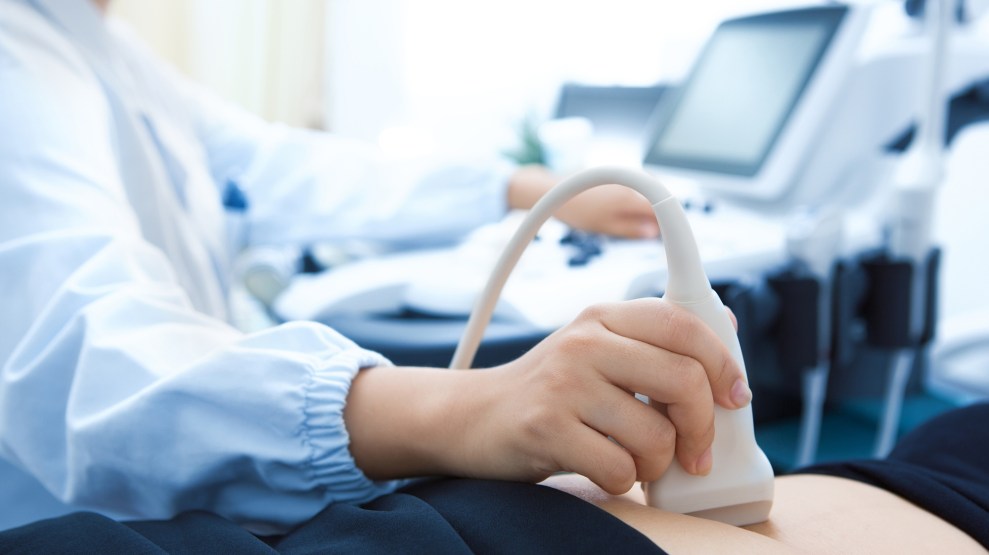 Last year, Texas was the loser in a national showdown over abortion rights, but conservative lawmakers in the state were not deterred. Several new anti-abortion measures have already gained traction in the 2017 legislative session, and two passed the Texas Senate on Tuesday—they now head to the House for a vote before they arrive at the governor’s desk.

Senate Bill 25, also known as the “wrongful births” bill, would protect physicians from legal retribution in cases where the provider withholds information about fetal abnormalities if the physician believes that, if given the information, the patient would consider terminating the pregnancy. It passed the Texas Senate in a 21-9 vote. Republican state Sen. Brandon Creighton said in a press release that he sponsored the measure because “it is unacceptable that doctors can be penalized for embracing the sanctity of life.”

“It is unacceptable that doctors can be penalized for embracing the sanctity of life.”

In what are known as “wrongful birth” lawsuits, parents have sued doctors after the birth of a child with a severe disability, when the parents feel they were not adequately informed about the disability and their options before birth. The concept originated in a 1975 Texas Supreme Court case, Jacobs v. Theimer, when Dorotha Jean Jacobs gave birth to a baby with defective organs after a bout with rubella in her first trimester, according to the Texas Tribune. Jacobs sued her doctor for failing to diagnose her illness early enough for them to understand the risks, and the court awarded Jacobs money to cover the child’s medical expenses.

In a Senate hearing, Creighton said he was concerned that without the law, doctors will warn patients of every likelihood for disability to avoid being sued. Anti-abortion advocates support the bill because they say it prevents physicians from encouraging patients to seek abortions in order to avoid lawsuits, while also protecting those physicians who do not recommend abortion procedures from facing litigation. Nine other states have bans on “wrongful-birth” lawsuits, including Arizona, South Dakota, and Indiana. Creighton has emphasized that Texas has a special responsibility to put a stop to these lawsuits, since the Texas Supreme Court’s decision in Jacobs v. Theimer set a precedent for all subsequent suits.

“It breaks my heart that courts have punished doctors for the birth of children with Down Syndrome or a missing limb,” Creighton said in a press release. “Every child is precious and deserving of our protection.”

Creighton also claims there has been an increase in attorneys who solicit clients as “wrongful-birth” specialists in metropolitan areas such as Austin and Houston. But malpractice attorneys told the Dallas Morning News that these lawsuits are rare, if not completely nonexistent.

Abortion rights group argue that the measure encourages doctors to withhold important medical information from patients about fetal defects. During a discussion on the Senate floor, state Sen. Jose Rodriguez, a Democrat, expressed his reservations, describing the measure as “all about restricting and further limiting a woman’s right to exercise her choice as to what she’s going to do in the case of serious…congenital defects in the fetus.”

Heather Busby, executive director at NARAL Pro-Choice Texas, told Mother Jones in an emailed statement that the the bill allows doctors to lie to patients, plain and simple.

“Pregnant Texans deserve to feel like they can trust their doctors to provide them with all the information, and when a doctor does not do that, those families deserve to have a legal avenue to seek compensation to care for special needs children,” Busby said.

Another highly restrictive measure also passed the Texas Senate in a 21-9 vote on Monday. Senate Bill 415, brought by state Sen. Charles Perry (R-TX) seeks to ban “dilation and evacuation” abortion procedures, which are the safest and most common forms of second-trimester abortion. The Guttmacher Institute, a reproductive rights think tank, reports that 11 percent of abortions in the United States take place after the first trimester, and 95 percent of those procedures are D&E abortions.

The bill refers to D&E procedures as “dismemberment abortions” and is predicated on the erroneous notion that fetuses can feel pain in utero. This theory comes from a 2004 congressional expert testimony by Dr. Kanwaljeet “Sunny” Anand, now the chief of palliative care and critical care medicine at Lucile Packard Children’s Hospital Stanford, who said that a fetus can feel pain at 20 weeks after conception. As Mother Jones has previously reported, his work is an outlier, and the general medical consensus is that the brain connections required to register pain are not formed until at least 24 weeks post-conception.

“Each year in Texas, more than a thousand lives are ended by dismemberment abortions,” Perry said in a press release, which noted that his bill would also penalize abortion providers for performing the procedure, classifying the offense as state felony, which could result in jail time.

To protest the measure, a group of activists attended the Senate meeting dressed in red-and-white costumes, a reference to Margaret Atwood’s dystopian novel, The Handmaid’s Tale.

The Center for Reproductive Rights, which defends the right to an abortion through legal means, has said the law is unconstitutional. CRR is also no stranger to litigation over Texas abortion law—they were plaintiffs in the case challenging HB2, which went to the Supreme Court last year and was ruled unconstitutional. Their efforts have blocked similar laws in Louisiana, Kansas, and Oklahoma.

Amanda Allen, CRR’s senior state legislative counsel, said in a press release, “Texas politicians need to abandon their crusade against women’s dignity and focus on measures that actually improve the lives and health of women and their families.”