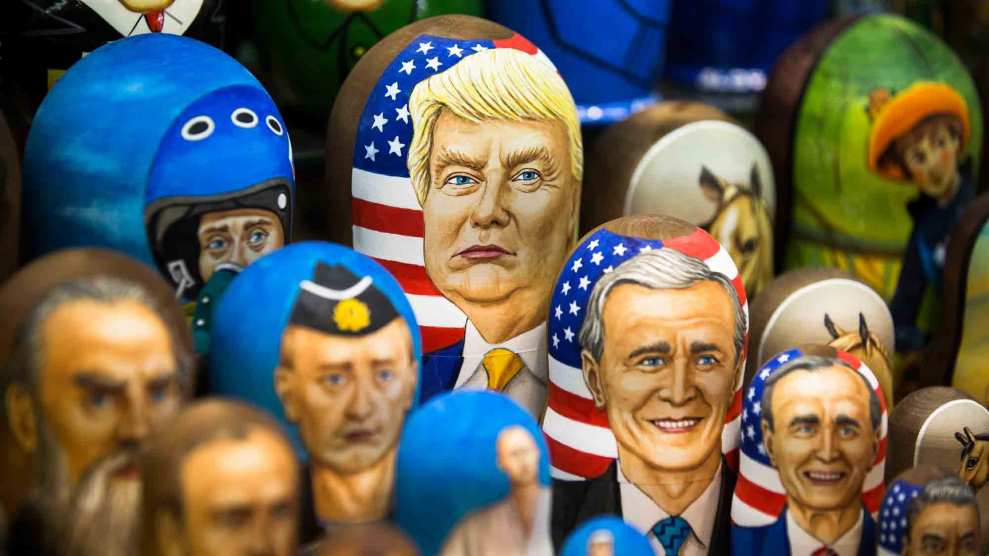 The Trump-Russia scandal keeps widening. Former national security adviser Michael Flynn resigned after revelations that he had privately talked to Russian Ambassador Sergey Kislyak about the sanctions imposed on Russia as punishment for its hacking of political targets during the 2016 election to aid Donald Trump. Attorney General Jeff Sessions was forced to recuse himself from Justice Department or FBI investigations involving Russia and the Trump campaign after he was caught falsely claiming he had not interacted with Russian officials during the campaign, when he was a top Trump adviser. (He, too, had met with Kislyak.) News reports keep yielding more information indicating Trump associates were in contact with Russian officials and possibly Russian intelligence. Reportedly there is at least one FBI investigation on this front; the House and Senate intelligence committees have each launched their own probes. And this past weekend, Trump had a Twitter meltdown and hurled the unsubstantiated Breitbart-born accusation that Obama had illegally spied on him in Trump Tower. It is becoming tough to track all the developments, as the story becomes more complicated and the prospects for a long and complex investigation increase. But there is a simple question that might be easy to answer and that could cut to the chase.

What happened during Flynn’s conversations with Kislyak before the election?

One fundamental issue in this scandal is what interactions occurred between Trump and his associates and Vladimir Putin’s regime and its agents. Trump and his political aides have repeatedly insisted there were no communications between the Trump camp and Russians during the campaign. Days after the election—in response to news reports quoting Russian Deputy Foreign Minister Sergei Ryabkov saying that “there were contacts” between the Trump team and the Kremlin—Trump spokeswoman Hope Hicks claimed the campaign had “no contact with Russian officials” before the election. After the conclusion of a January 11 press conference, Trump insisted his campaign had no contact with Russia. At a February 14 White House briefing, press secretary Sean Spicer asserted there had been no communications between the Trump campaign and Russians. And Trump has frequently declared—as he did at a press conference last month—”I have nothing to do with Russia.” (That is false. Trump has repeatedly tried to do business in Russia, and he held the Miss Universe contest, which he owned until 2015, in Moscow, in partnership with oligarch Aras Agalarov, with whom Trump was pursuing other deals in Russia.)

The public record contradicts the denials of the Trump crew. Flynn, Sessions, onetime Trump foreign policy advisers Carter Page and J.D. Gordon, and former campaign manager Paul Manafort each had some degree of contact with Russian officials during the campaign. Perhaps the most intriguing interaction involved Flynn.

When the Washington Post broke the news that Flynn had spoken with Kislyak during the transition, the newspaper’s reporters spoke to the Russian ambassador, who revealed a fact that has not received sufficient public attention: Flynn and Kislyak were in communication prior to Election Day. This statement belied all the Trump camp claims that there had been no hobnobbing with the Russians during the campaign. But the implications run deeper.

Beginning in early June, there were news reports that the Russians were behind the hacking of Democratic targets that led to the public release, through WikiLeaks and other outlets, of emails stolen from the Democratic National Committee. (In October, emails swiped from Clinton campaign CEO John Podesta would be released.) In late July, Obama said that “experts have attributed this [hack] to the Russians.” In mid-August, Trump, as the GOP nominee, received an intelligence briefing that noted that Moscow was behind the hacks and leaks. Flynn attended that briefing. On September 7, James Clapper, the director of national intelligence, pointed to Obama’s July statement and added, “The Russians hack our systems all the time, not just government but also corporate and personal systems.” A month later, Clapper’s office and the Department of Homeland Security released a statement stating that Moscow was definitely the culprit.

So from the start of June until Election Day, it was widely noted that the Russians were either the likely perps or the guilty party—that is, Putin’s government had conducted a secret operation to influence an American election. Though it would take the intelligence community until after the election to reach the conclusion that this scheme was mounted to benefit Trump, it did seem obvious throughout the campaign season that Clinton was being harmed by the operation and Trump was being helped.

All this means that when Flynn was talking to Kislyak—or any other Russian government officials—during the campaign, he was in contact with a foreign power waging political warfare against the United States and had reason to suspect or know this. And throughout the summer and fall campaign, Flynn, who was already cozy with Moscow (having accepted a speaking fee to hang out with Putin at a Moscow gala for RT in December 2015), was Trump’s most senior foreign policy aide. (He was given a prime speaking spot at the Republican National Convention.)

What was Flynn, this prominent and important Trump adviser, saying to Kislyak during this stretch? The ambassador refused to tell the Washington Post what he and Flynn discussed. Was Flynn firmly telling the Russians to cease meddling in US politics? Did they discuss the hacking at all? Or perhaps Flynn was signaling to Moscow that Putin would get a better deal if Trump were elected. If Flynn uttered to Kislyak anything of that nature—or even if he ducked the issue of the hacking—Moscow could have read this as encouragement for its covert operation to undermine the US election.

There has been speculation that the Trump campaign colluded with Moscow on the hacking/leaking plot. (Clapper this weekend said he had seen no evidence of such collusion but noted it was possible evidence might have emerged since he left the government in January.) But communications between the Trump camp and the Russian government need not have been so explicit to qualify as outrageous and improper. On the campaign trail, Trump had praised Putin, refused to acknowledge the Russian hack, and raised the possibility of easing the sanctions imposed on Russia for its invasion of Ukraine. If Flynn was reinforcing Trump’s pro-Putin message in his private chats with Kislyak, that would have been reassuring for Moscow and might possibly have emboldened a regime as it was assaulting the US electoral system.

Flynn’s pre-election communications with Kislyak could be far more significant than his conversations during the transition about the Obama sanctions that prompted his firing. Investigators working the Trump-Russia beat should zero in on this. Flynn should be asked when exactly he was gabbing with the Russian ambassador during the campaign. Phone and text records ought to be reviewed. There might be transcripts of these discussions, for Kislyak was routinely spied on by the US intelligence community. (That’s why Flynn got caught lying about his talks with the Russian ambassador during the transition.)

There is plenty of muck for investigators and reporters to be raking regarding the Trump team’s interactions with Russia. It is evident that there were contacts during the campaign—and that Trump and his lieutenants have repeatedly dissembled about this. And Flynn may well be one key to figuring out what was going on. In recent days, Sessions’ two acknowledged interactions with Kislyak have drawn much notice. As much scrutiny should be applied to Flynn’s pre-election communications with the Russian. It might just offer a path to solving the riddle wrapped in a mystery inside an enigma.