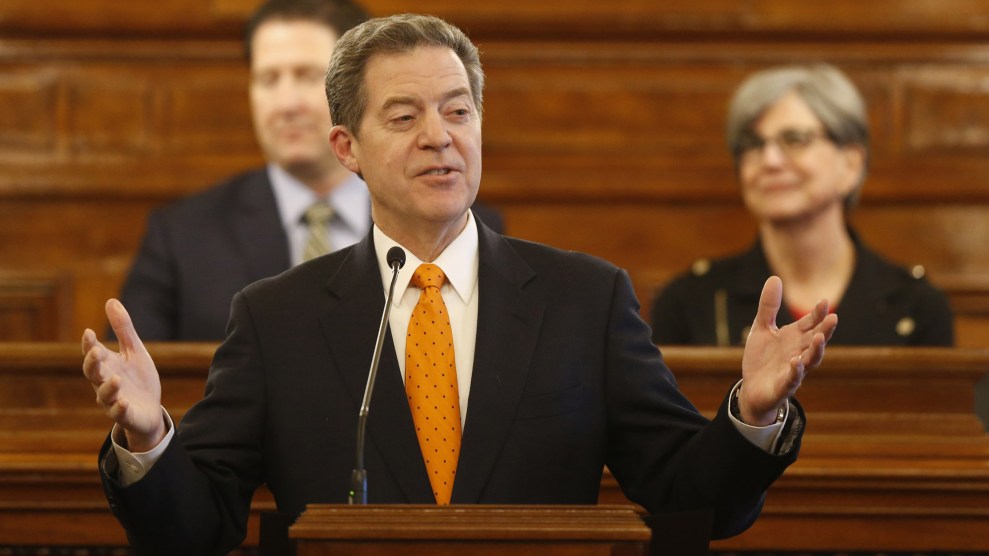 The bad news keeps piling up for Kansas Gov. Sam Brownback and his radical budget-cutting experiment. The state Supreme Court ruled on Thursday that the Republican governor and state legislature had—yet again—failed to adequately fund public schools by hundreds of millions of dollars per year.

The court ordered lawmakers to devise a plan that would meet constitutional standards by the end of June and mandated a new formula to increase government spending on the state’s public education system. The demand for extra education funding couldn’t come at a worse time for Brownback, as the governor and Republican-held state legislature are caught in a stalemate on whether Kansas should repeal Brownback’s landmark income-tax cuts in order to solve shortfalls that have plagued the state budget in recent years.

“We conclude the state’s public financing system, through its structure and implementation, is not reasonably calculated to have all Kansas public education students meet or exceed the minimum constitutional standards of adequacy,” the court wrote in an unsigned, unanimous opinion. By underfunding education, the judges said, the state system failed in one-fourth of all its public schools to appropriately educate students in basic reading and math skills and shortchanged half of the state’s black students and one-third of its Hispanic students.

John Robb, an attorney representing the school districts involved in the lawsuit, told the Wichita Eagle that the ruling represented “justice for kids,” noting that the state could be forced to spend anywhere from $431 million to $893 million per year in additional education funding, depending on how lawmakers decide to calculate per-pupil spending levels.

The state’s current legal trouble dates back to 2010, when four school districts sued the state, alleging that Kansas provided “inequitable” and “inadequate” funding to its public education system. The lawsuit attacked state funding from two angles. It alleged that the overall pool of money that the state devotes to education was far too low, violating the state’s constitutional guarantee of an adequate education. And as Kansas reduced overall school funding, the school districts behind the lawsuit noted that the state’s cuts were inequitably distributed. That distribution, they alleged, hurt the state’s poorest districts and discriminated “based upon district wealth.”

Those concerns have only intensified since the lawsuit was first filed, as Kansas has struggled to climb out of a fiscal disaster. After Brownback took over as governor in 2011, he passed historically large tax cuts, promising that lower income taxes would spur economic growth—a preview of what Donald Trump and fellow Republicans now want to do at the federal level. But those cuts have since been disastrous, leaving the state with a vast budget gap as tax revenue continually comes in below expected levels.

In 2013, a three-judge panel ruled against the state, ordering Kansas to provide an additional $400 million in education spending. “It seems completely illogical,” the court noted, “that the state can argue that a reduction in education funding was necessitated by the downturn in the economy and the state’s diminishing resources and at the same time cut taxes further.” Brownback slammed the ruling for increasing the tax burden on Kansas residents, adding that the legislature, not the court, should make school funding decisions.

In 2014, the state Supreme Court weighed in on the equitable funding side of the lawsuit, ruling that the state’s decades-old funding formula did not dedicate enough funds to low-income districts and violated the state constitution. At that time, the Supreme Court declined to rule on the question of whether the state’s total per-pupil spending was adequate and instead remanded that question back to the lower court. A year later, Brownback signed a law that replaced the state’s formula with a two-year block grant system intended as a stopgap until a permanent formula could be devised. But last February, the Kansas Supreme Court ruled that the state’s block grant effort was inequitable. The court ordered lawmakers to increase funding for poor school districts or risk a statewide school shutdown. Six days before a June deadline, Kansas lawmakers passed an education funding measure that gave $38 million to poor districts and staved off a shutdown. Now, another shutdown looms if legislators fail to come up with another plan to change the state’s formula.

The decision marks a blow for Brownback and the Republican-led legislature tasked with drafting a funding plan by the court’s new June deadline. In early February, Republican state senators proposed a 5 percent cut to public education spending for the rest of the fiscal year—cutting $120 million in spending through June—and raising income taxes as part of a plan to close the state’s budget gap. That decision quickly fell apart after it drew the ire of educators and activists. Lawmakers eventually passed an increase to the state income tax, but Brownback vetoed it.

Read the court’s decision below: