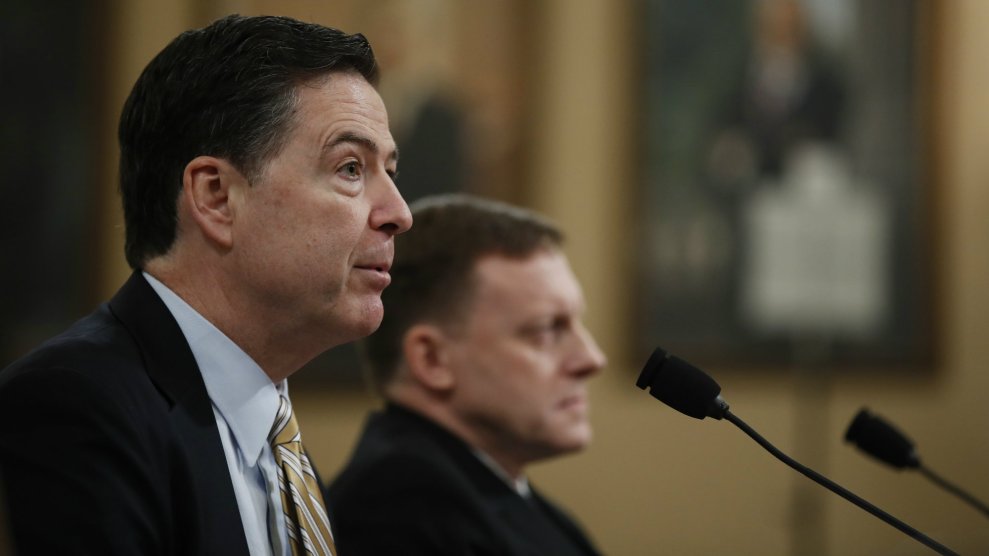 On Monday morning, hours before the House intelligence committee convened a hearing on Russian hacking during the 2016 campaign with star witness FBI chief James Comey, the president of the United States was tweeting furiously in an effort to preempt headlines that might emerge from the event. The political-media world was waiting for Comey to comment on the absurd and fact-free charge that Trump tweeted more than two weeks ago claiming President Barack Obama had wiretapped him during the campaign. But the hearing was also expected to reinforce the intelligence committee’s previously released assessment that Russian autocrat Vladimir Putin mounted a covert action to subvert the US election to benefit Trump. And the other big subject: interactions Trump and his crew had with Russia during the campaign.

Trump and his supporters have been fighting against the Russia-hacked-America narrative for months, because they know (quite correctly) that it taints Trump’s Electoral College win. So at the crack of dawn, Trump was trying to dismiss this topic. He tweeted that former Director of National Intelligence James Clapper had said there was “no evidence Potus colluded with Russia.” He insisted, “This story is FAKE NEWS and everyone knows it.” He claimed the “Democrats made up and pushed the Russian story as an excuse for running a terrible campaign. Big advantage in Electoral College & lost!” And he asserted, “The real story that Congress, the FBI and all others should be looking into is the leaking of Classified information. Must find leaker now.”

James Clapper and others stated that there is no evidence Potus colluded with Russia. This story is FAKE NEWS and everyone knows it!

The Democrats made up and pushed the Russian story as an excuse for running a terrible campaign. Big advantage in Electoral College & lost!

The real story that Congress, the FBI and all others should be looking into is the leaking of Classified information. Must find leaker now!

What about all of the contact with the Clinton campaign and the Russians? Also, is it true that the DNC would not let the FBI in to look?

These come across as the tweets of a desperate man. There was much wrong and false about Trump’s mini-missives. It was true that Clapper recently said on Meet the Press that he had not seen evidence that the Trump campaign colluded with the Russians in their assault on US democracy. But Clapper certainly left open the possibility that such evidence could emerge. More important, the issue was not solely whether Trump and his lieutenants were active co-conspirators in Moscow’s hacking and leaking aimed at the Democrats. One big question is whether Trump and his team either explicitly or implicitly encouraged Putin to mount or continue the operation targeting US politics.

After saying there was no collusion, Trump tweeted that the whole Russian story is phony and just Democratic spin. That’s obviously nuts. Having cited Clapper on the collusion matter, Trump ignored him—and the entire US intelligence community—on the big picture, because Clapper’s office and the US intelligence agencies released reports last year concluding Russia had hacked Democrats and leaked their emails to help Trump win. Still, Trump calls this fake news. That would mean he does not accept the assessment. Here we have the president of the United States proclaiming the full intelligence community cannot be believed or trusted. He is characterizing a reality that is politically inconvenient for him as nothing but a made-up story concocted by his political enemies. This is dangerous.

Trump’s tweets were blown out of the water at the start of the hearing. Mike Rogers, the head of the National Security Agency, said the intelligence community still stands behind its conclusion that Moscow pulled off the hacks and the leaks in part to assist Trump. In other words, this stuff is real. Then Comey dropped a bombshell: He confirmed that the FBI was investigating the Russian hacking and contacts between Trump associates and Russia, noting that his agents were examining whether there had been any coordination between the Trump camp and Russians. Comey said this probe has been going on since July. The FBI chief also declared (repeatedly) that the FBI and the Justice Department have no “information that supports” Trump’s tweets claiming Obama wiretapped Trump. In a sense, the FBI director and the NSA head were each calling Trump a liar.

Back to the Russian hack: By the president’s standard, the FBI chief is investigating fake news. So shouldn’t Trump fire Comey—or, at least, order him to cease and desist? Trump’s position has no logical consistency. In his tweets, he tried to divert attention to leaks (which were about interactions between his folks and Russians). But if the leaks are not true, then there is no reason for an investigation of the leaks. Yet Republicans on the committee took their lead from Trump and focused on leaks much more than the Russian hacks. During his opening round of questioning at the hearing, Rep. Devin Nunes, the chairman of the committee, gave a chunk of his time to another Republican to grill Rogers about the damage caused by leaks. In his opening statement, Nunes devoted more time to echoing Trump’s claim that there is no evidence of collusion than he did to denouncing the Russian effort to undermine the US election.

Trump and his defenders will no doubt continue to say there is no public indication of collusion. But collusion is hardly the only question at hand. According to multiple media reports, Trump associates interacted with Russians during the campaign. What were they talking about? For instance, the Russian ambassador to the United States has said he was in contact with Ret. General Michael Flynn before the election, at a time when Flynn was Trump’s top national security adviser. From mid-June onward, there were reports—and then the intelligence community in October publicly declared—that the Russians were behind the hacks and leaks that harmed Hillary Clinton’s campaign. (Trump and Flynn were briefed on this in mid-August.) So when was Flynn in contact with the Russian ambassador? And what was he telling him? If Flynn—or other Trump people—were signaling to the Russians that Moscow would get a better deal with a Trump administration, then they were providing Putin more incentive for his clandestine campaign against the election. This would be aiding and abetting a foreign power that was engaged in political warfare against the United States.

Rogers and Comey told the committee that full investigations are indeed warranted. The Russians hacked the campaign, and there are indications that Trump associates interacted with Russians. Trump’s tweets cannot undo this. He now finds himself in the highly awkward position of being contradicted by his FBI director (on the absurd wiretapping charge) and linked to a counterintelligence investigation (and perhaps a criminal one) conducted by his own FBI. None of this is fake. How will Trump tweet himself out of this predicament?

UPDATE: During a break in the hearings, two Democratic members of the House intelligence committee told me that this was the first time they were told that the FBI has been investigating contacts between Trump associates and Russia. One noted, “We’ve heard this was a possibility but we didn’t know for sure.” This suggests that in private briefings with committee members, Comey would not confirm or deny the existence of an investigation. Both Democratic members pointed out that Nunes and Rep. Adam Schiff, the ranking Democrat on the committee, might have been informed of the FBI investigation in the more restricted briefings they receive.

UPDATE II: In an important exchange, Schiff asked Comey a question referring to Clapper’s recent remark that he had not seen any evidence of collusion between Trump associates and Russia. Comey said no evidence of coordination was included in the assessment released by the intelligence community in January because the FBI’s investigation was not finished.