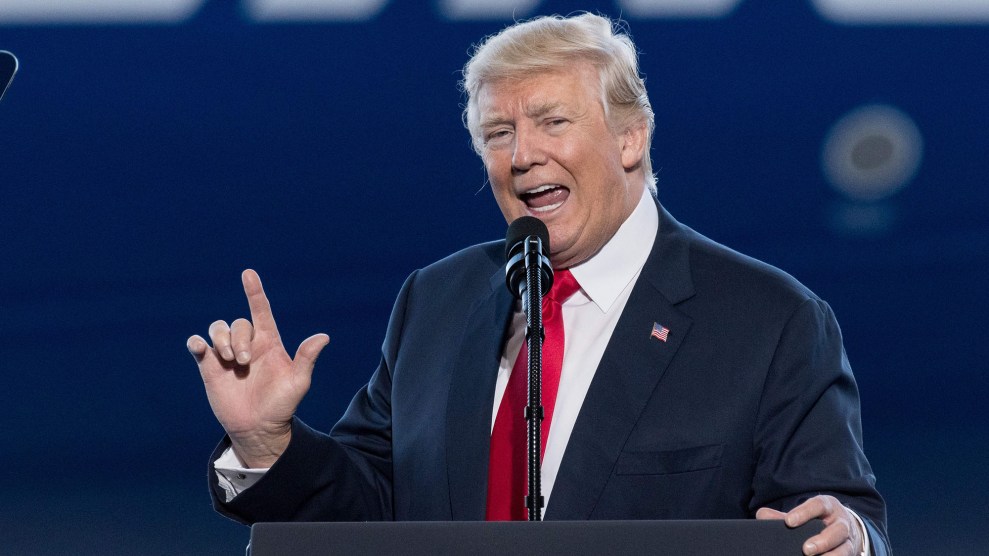 President Donald Trump has thrown his full weight behind the House Republicans’ plan to overturn Obamacare. But he might end up regretting that move in 2020. That’s because many of the bill’s most disruptive changes would take effect just as he’s launching his bid for reelection.

If the early days of the Trump presidency are any guide, policy implementation doesn’t appear to be this administration’s strong suit.

Of course, there’s more than one way to spark a political bloodbath. When Trump gets ready to dive into his reelection campaign, he could face a crumbling health care system in the middle of turbulent changes. Many of the major provisions in the GOP bill won’t go into effect immediately. Instead, key Obamacare policies would sunset in early 2020—with major changes to Medicaid, tax credits, and the individual insurance marketplace all kicking in right around the time Democrats are battling it out in the Iowa caucuses.

If there’s one lesson to learn from Obama’s Affordable Care Act, it’s that major overhauls of the health care market inevitably won’t go as smoothly as predicted. And if the early days of the Trump presidency are any guide, policy implementation doesn’t appear to be this administration’s strong suit.

Republicans regularly complained that the Affordable Care Act was structured so that former President Barack Obama wouldn’t have to face the consequences of the bill until after his 2012 reelection campaign; the full rollout of the program didn’t take place until several years after Obama signed the 2010 bill into law. When the insurance marketplaces finally launched in the fall of 2013—with a disastrous rollout that created public outrage—Obama had long since secured his second term.

Republicans apparently aren’t going to provide Trump with that kind of cover. For example, the biggest changes to Medicaid in the GOP’s proposal will kick in at the end of 2019 and the beginning of 2020.

One of Obamacare’s most successful measures for boosting the insurance rolls has been Medicaid expansion, which allows states to enroll everyone earning up to 138 percent of the federal poverty level into the government insurance program. The federal government largely foots the bill for these new enrollees. According to a study by the Kaiser Family Foundation, in the 31 states that have participated in this program, more than 11 million people joined the Medicaid program thanks to the new, more generous eligibility requirements.

Under the Republican repeal bill, those states wouldn’t immediately lose funding for this larger universe of possible Medicaid recipients. Rather, they’ll receive the same level of federal funding until…January 1, 2020. At that point, states will no longer get funding to add new people to the program, and anyone who drops from the Medicaid rolls for more than a month will be excluded thereafter.

Health care costs can be pretty unpredictable, so Trump better hope none of those unexpected spikes hit swing states in 2020.

Also beginning in 2020, the overall structure of Medicaid funding will change. Currently, the feds promise to pay for a set percentage of state medical costs through the program. It’s an open-ended guarantee: If a state sees a huge spike in the cost of health care in any given year, the federal government will automatically step in to help cover those extra costs.

But under the GOP’s new plan, there would be a cap on how much the feds contribute to state Medicaid spending (an amount that will vary widely between states). According to the Center for Budget and Policy Priorities, a liberal group, states would lose $116 billion in federal contributions over the next decade because of that change. Some states will undoubtedly see their Medicaid costs rise above the new cap, leaving state governments scrambling to either find more funding or to cut benefits. Health care costs can be pretty unpredictable, so Trump better hope none of those unexpected spikes hit swing states in 2020.

People who buy their insurance through the individual marketplaces will also experience a major shift starting in 2020. Before Obamacare, it could be incredibly difficult for someone trying to purchase insurance as an individual to figure out what plans actually covered. Frequently, consumers would realize only after getting sick that their plan could leave them with large out-of-pocket costs. But now, if you visit HealthCare.gov to pick out a health plan, options are grouped into tiers based on how generous the benefits are. Obamacare created a system of simple language to make those differences clear: Bronze plans generally have the lowest premiums and least generous benefits, silver and gold plans are in the middle, and platinum plans are expensive but have the best coverage. Not every silver plan is identical, but they should each cover a similar percentage of the costs for most patients.

The Republicans’ plan will erase those clear designations starting in 2020. Consumers will once again have to wade through the plans’ details and attempt to judge the relative merits of each option without clear-cut guidelines. “This could muddle what is already a difficult process for plan shoppers,” writes Timothy Jost, a professor at Washington and Lee University School of Law, in the journal Health Affairs.

At the same time Obamacare’s tiers are wiped out, the GOP legislation would also roll out a new scheme for helping consumers pay for insurance. Currently, the government offers subsidies to anyone making up to 400 percent of the poverty line. That assistance varies based on income and region (with more aid given to people in places where insurance is more expensive).

Trump might have to explain to a lot of older and poorer voters why they’re suddenly getting less help when they purchase health insurance.

The Republican plan ditches the Obamacare subsidies and replaces them with refundable tax credits that are solely based on the recipient’s age for individuals earning less than $75,000 per year and families earning less than $150,000. (The tax credits decline for people earning more than that.) For middle-class families, the GOP plan will offer more assistance. But low-income people and those who live in regions where health care costs more—generally rural areas—will get less help from the government than under the current system.

The Kaiser Family Foundation put together a handy tool earlier this week that compares the current subsidies with those under the new GOP plan. For example, under Obamacare, a 60-year-old who lives in Iowa’s Poweshiek County and makes $30,000 a year would have received $11,270 in subsidies in 2020. Under the Republican bill, that same 60-year-old would get $4,000 in government help. Across the country, these reductions will hit the poor, older people, and rural communities the hardest. So Trump might have to explain to a lot of older and poorer voters why they’re suddenly getting less help when they purchase health insurance.

Maybe that’s why Trump has begun to subtly shift his position. During a White House meeting Wednesday night with members of various conservative groups who have objected to the slow pace of the Obamacare repeal in the GOP proposal, Trump reportedly hinted that he’d be fine with speeding up the process so that the changes to Medicaid expansion take place in 2018 instead of 2020. That would give the insurance market a bit more time to settle before Trump has to face the electorate.

On the other hand, it would give congressional Republicans one more reason to worry about a bloodbath in 2018.