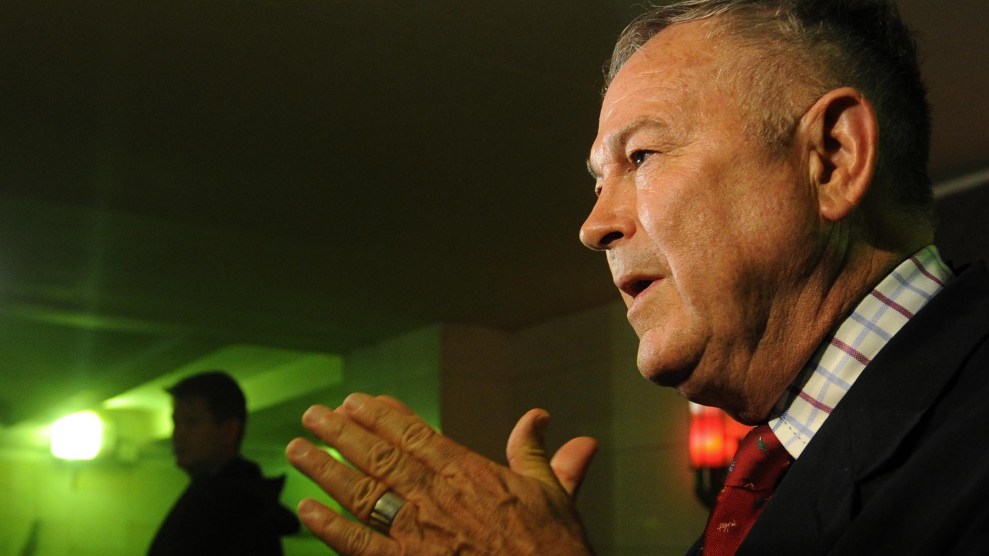 Toomas Hendrik Ilves, the president of Estonia from 2006 to 2016, had a crisis on his hands in September 2014. Russian security service agents crossed the border and kidnapped and detained Eston Kohver, an agent with Estonia’s equivalent of the FBI. The Russian government accused Kohver of being a spy and sentenced him to 15 years in prison.

“In order to get Russia, we are now… destabilizing our own democratic system here with that kind of nonsense.”

Ilves referred to the episode Thursday during his testimony at a House Foreign Affairs Committee hearing on Russian disinformation and “weaponization of information.” Rep. Dana Rohrabacher (R-Calif.), a staunch defender of President Donald Trump, opened his statement by diminishing the importance of connections between the Trump campaign and Russian officials and said that controversy over the matter “has reached the absurd level of attacks.”

“In order to get Russia,” he said, “we are now…destabilizing our own democratic system here with that kind of nonsense.”

“Well, we have constant violations of our border by military jets. That’s one thing, and that’s consistent,” Ilves said, adding these incidents have “massively increased in the last four years.”

Rohrabacher explained that he had visited the Baltic states after hearing stories of Russian military aggression and found “not one report of actual military aggression.” He added that the United States has sent “our tanks up there, having B-52 mock raids on Russia, over Estonia, toward the Soviet capital, in the name of stopping Soviet military aggression that never existed. This has got to stop or we’re going to end up in war.”

Echoing Trump’s practice of equating Russia and the United States—”We have a lot of killers…you think our country is so innocent?” the president said to Bill O’Reilly last month— the 13-term congressman offered his own analysis of the similarities between the United States and Russia. “We have engaged in some of these activities,” he said. He then mentioned the Phoenix Program, a Vietnam-era US undercover program that employed torture and assassination to kill tens of thousands of Viet Cong suspects from 1968 to 1972, and other examples of American involvement in the internal affairs of other countries during the Cold War.

“[Russia is] being run by tough guys—sort of like Mayor Daley, in Chicago, is transported over to Russia.”

Rohrabacher also compared Putin to Richard Daley, the late mayor of Chicago, saying that Russia is “being run by tough guys—sort of like Mayor Daley, in Chicago, is transported over to Russia.” Daley “beat demonstrators up and did not represent anything what America was all about, but he was not some vicious dictator. He had been elected by his people and we would try to unelect him as well.” He added, “What’s happening in Russia, of course, is you have a country watching out for its national interest.”

“I didn’t get to finish,” the former president said, referring to the kidnapping of the Estonian official. “That was a military action. Troops came over and kidnapped this guy.” He then noted massive military exercises the Russians perform at borders in the region, and not just between Russia and Estonia. “I mean, they do mock bombing raids on Sweden,” he said. “So it’s not just us.”

Connolly then addressed Rohbacher’s comparison of Putin with Daley. “I went to school in Chicago during his mayorality,” Connolly said. “I didn’t know him, but I assure you, Vladimir Putin is no Richard Daley. Richard Daley did not have his political opponents assassinated. He didn’t send them into exile. He didn’t put them in prison. He didn’t silence the press. He didn’t assassinate members of the press. He didn’t exile members of the press. He sparred with them, and sometimes he was bested…There is no comparison, and I think we do ourselves a disservice by not recognizing on a bipartisan basis the gravity of the situation we face.”

Watch the exchange below: